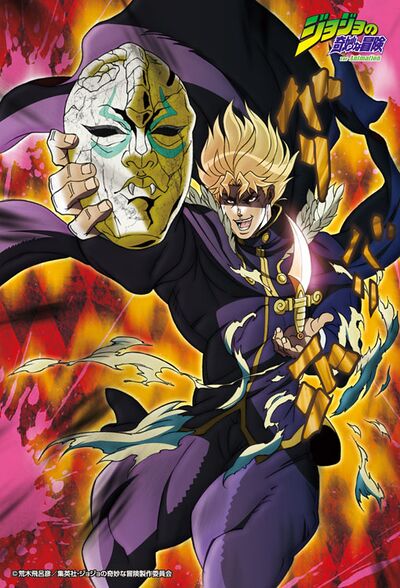 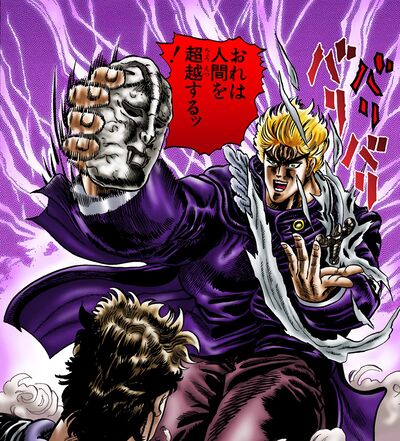 It narrates Jonathan's search for an antidote for his father in the slums of London and Dio's discovery of an ancient Stone Mask's supernatural powers.

After leaving his father George Joestar I in the care of trustworthy physicians, Jonathan leaves for London in the hopes of finding an antidote for Dio's poison. Meanwhile, Dio breaks into his adopted brother's study and finds the Stone Mask. Certain that only he and Jonathan know of its tendril-extending mechanism, Dio decides to kill Jonathan by using the mask on him.

Speedwagon and his group attacking Jonathan.

Jonathan's carriage suddenly comes to a stop, as the driver refuses to carry onward: they have arrived at Ogre Street, a particularly dangerous area of the city. Jonathan decides to continue alone, driven by his conviction to save his father. Back at the mansion, Dio learns of Jonathan's destination and assures himself that Jonathan is either dead or dying.

While walking along the maze-like Ogre Street, Jonathan is set upon by a trio of muggers led by one Robert E. O. Speedwagon, who sends his friend Tattoo to slice their victim up. However, Jonathan grabs Tattoo's blade, unconcerned at the prospect of losing his fingers. The third mugger, a Chinese martial artist, attacks Jonathan from behind, but Jonathan defeats him and Tattoo with a single punch.[1] Jonathan resolves himself to fight Speedwagon, who reveals razor blades inside his bowler hat. Speedwagon throws the hat at Jonathan, piercing his arms down to the bone; Jonathan nonetheless charges the mugger and takes him out with a kick. Other residents of Ogre Street emerge and surround Jonathan, but Speedwagon calls them off, noticing that he and his friends have only light injuries. Jonathan explains that he was concerned about the muggers' families, shocking and impressing Speedwagon with his mercy and naivete. The mugger and Jonathan introduce themselves to each other, and Speedwagon offers to take Jonathan to the poison dealer he is looking for.

Dio nearly killed by a vampire.

Meanwhile, still anxious over the prospect of Jonathan finding evidence, Dio wanders the streets of a nearby port town with a bottle in his hand, hating himself for drinking like his father once had. Dio eventually bumps into two vagrants, who taunt him for being out so late at night. Dio decides to use the opportunity to test the Stone Mask: he puts the mask on one of the vagrants, takes his knife, and stabs the other vagrant in the throat. The mask activates, releasing a blindingly bright light.[2] After a moment, the mask's light fades as the man collapses to the ground. Dio is disappointed, having developed strange expectations for the mask; though he turns to leave, Dio realizes that the vagrant is still alive, having become an inhuman being. The reborn vagrant overpowers Dio with his superhuman strength, eventually grabbing Dio by the neck. Feeling the life being drained out of him, Dio notices that his attacker has de-aged and finally realizes the mask's secret. Suddenly, the monster disintegrates, having been exposed to the light of the rising sun.[3]

Dio arrives at the mansion and finds Jonathan waiting for him. Jonathan reveals that he has already cured his father and alerted the police to Dio's crimes. Dio attempts to feign remorse, but Speedwagon appears, having followed Jonathan from Ogre Street. Speedwagon accuses Dio of being evil since birth and warns Jonathan to not believe a word he says. The two drag Wang Chan out from behind the curtain, which then opens to reveal a saddened George and a group of policemen. Though George feels regret over Dio's fate, he is unable to watch as his son is taken away in chains. George turns to leave, but he is troubled when Wang Chan mentions Dio's incredible luck.

Dio, seemingly defeated, requests that Jonathan place the handcuffs on him. As Jonathan approaches his adoptive brother, Dio laments that humans are cursed to have their plans go awry, before suddenly revealing the Stone Mask and knife on his person. Jonathan is taken aback by the Stone Mask, failing to see the knife coming towards him. Though George shields Jonathan and takes the knife in his place, his blood is sufficient for the mask's activation. Dio laughs triumphantly as the mask emits light once more, even as the policemen fire at him.[4]