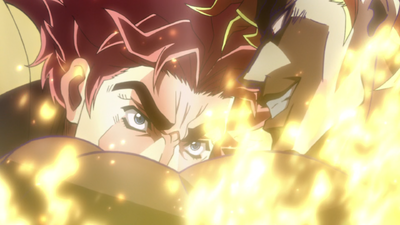 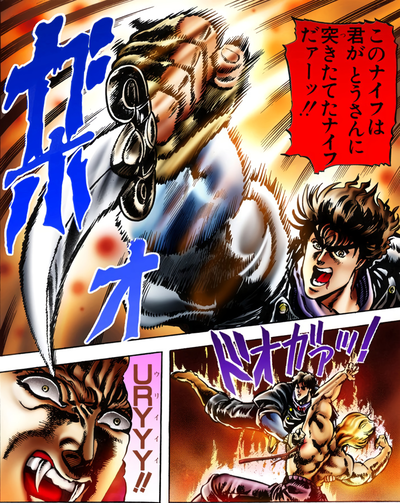 Youth with Dio (ディオとの青春, Dio to no Seishun) is the fourth story arc in Phantom Blood.

It narrates Jonathan's desperate struggle against Dio, who has become a Vampire using the Stone Mask.

George Joestar passes away in his son's arms.

The policemen's bullets send Dio flying through a window as the Stone Mask's light fades. Dying from the stab wound inflicted on him, George asks Jonathan to forgive Dio in his dying breath, and dies peacefully in his son's arms. The Chief Inspector blames himself for this tragedy, revealing that George had learned the truth about Dio's father Dario Brando but was too kind-hearted to condemn him. As the inspector mourns George's loss, Speedwagon notes that Jonathan has inherited his father's spirit and praises the Joestars as an exemplary upper-class family. It is then that Speedwagon notices that Dio's body is gone; though he warns the Inspector to stay away from the window, a resurrected Dio slices his head in two.[1]

With everyone present shocked by the monster he has become, Dio wastes no time in killing all the policemen. A fearful Jonathan, feeling guilty for researching the Stone Mask, knows that he must end this madness.[2] Speedwagon is attacked by the reanimated corpse of one of the policemen, but Jonathan defeats the corpse with a spear from a nearby suit of armor. Jonathan deduces that the only way to kill Dio at this point is to destroy his brain completely. Jonathan attacks Dio, who intercepts and breaks the spear in two using only his hand, causing the spear tip to lodge itself in Jonathan's shoulder. However, Jonathan and Speedwagon seemingly disappear while Dio's back is turned. After a quick assessment of the foyer, Dio notices blood streaming from under a curtain and pulls the curtain back, only to be smothered by the falling curtain as Jonathan sets fire to it.[3]

But Dio rips his way free, as his skin is able to regenerate itself at the same rate as it burns. As Dio throws a burning chair at the two of them, Jonathan pushes Speedwagon out of the way and tells him to flee before making his way up to the second floor. The fire has begun to spread throughout the Joestar Mansion; Dio walks up the wall after Jonathan, proclaiming that the latter can't escape.

Jonathan and Dio plummet into the inferno.

While Jonathan continues up to the rooftop, Speedwagon realizes that his plan is to set fire to the whole mansion, hoping that the resulting inferno will be enough to kill Dio; it is not lost on Speedwagon that Jonathan is ready to sacrifice himself. As Jonathan blocks a kick with the spear tip, memories of his youth with Dio come flooding back. Resolved to settle their intertwined youths, Jonathan charges Dio with his shoulder, and the two crash through the roof.[4] As the two fall through the mansion, Jonathan barely manages to maintain a grip on Dio with the aid of the spear tip and his own belt.

Dio is impaled on the Statue of the Goddess of Love.

Though Dio is impressed by Jonathan's strength, he announces that only Jonathan will be consumed by the flames. Jonathan, pleading his father for the last of his power, kicks the wall of the mansion and propels both him and Dio into the Statue of the Goddess of Love, impaling Dio on the statue. Dio is unable to escape, and curses Jonathan as he melts in the inferno. Speedwagon, watching from afar, laments Jonathan's demise before the latter is suddenly propelled out of a window. Overjoyed at his friend's survival, Speedwagon proclaims Jonathan's victory over Dio.[5]

Erina reunites with Jonathan at the hospital.

Three days after the battle with Dio, Speedwagon decides to visit Jonathan in the hospital to offer emotional support, only to be stopped at the door to Jonathan's room by a nurse. The nurse refuses to let him in, stating that she can take care of him by herself. As the door is closed on him, Speedwagon takes offense at the woman's words and stubbornly resolves to come back later. That night, Speedwagon sneaks in after visiting hours and makes his way to Jonathan's room. To his surprise, he sees a light streaming from the slightly opened door; peering inside, he notices that the woman who dismissed him earlier is still there. Jonathan finally regains consciousness and, though he thinks it impossible at first, the woman turns out to be his childhood sweetheart, Erina Pendleton. Speedwagon realizes that the two have known each other for some time and, concluding that it must be fate, coolly leaves the two to rekindle their relationship. Erina faints due to fatigue, but Jonathan catches her with his broken arm, saying that he will always be there to catch her.

Back at the remains of the Joestar Mansion, the Chinese poison dealer sifts through the rubble for valuable items. He comes across the Stone Mask, but a hand emerges from the debris as he reaches down to grab it; as the hand grabs the dealer's wrist and drains his blood, Dio's charred face peers out from beneath the rubble.[6]