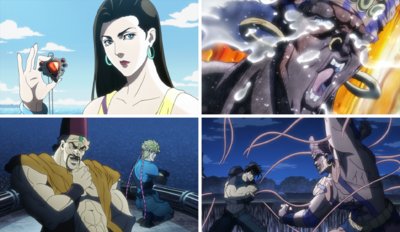 Laying a Deeper Trap! (深く罠をはれ!, Fukaku Wana o Hare!)[1] is the seventeenth episode of the JoJo's Bizarre Adventure anime. It is also the eighth episode of Battle Tendency. It covers half of Chapter 75 through Chapter 80 of the manga.

Back to the present, Lisa Lisa explains to Joseph and Caesar how the creator of the Stone Mask, Kars, is seeking a gem known as the Red Stone of Aja to power the Stone Mask and become the "Ultimate Thing". Lisa Lisa reveals she herself possesses this gem, showing that this stone can turn the sunlight into a powerful laser ray. When Joseph suggests to destroy the stone, Lisa objects and explains that it is needed to defeat the Pillar Men. With a week left until the rings inside Joseph dissolve and kill him, Lisa Lisa pits Joseph and Caesar against Loggins and Messina respectively for their final test.

Commentary
“
Taizo Yoshida is in charge of the storyboard like in Episode 15, which we finished early. Episode 17 will also be finished in advance.