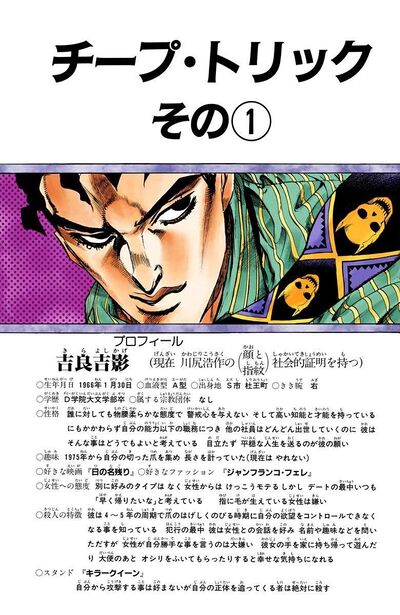 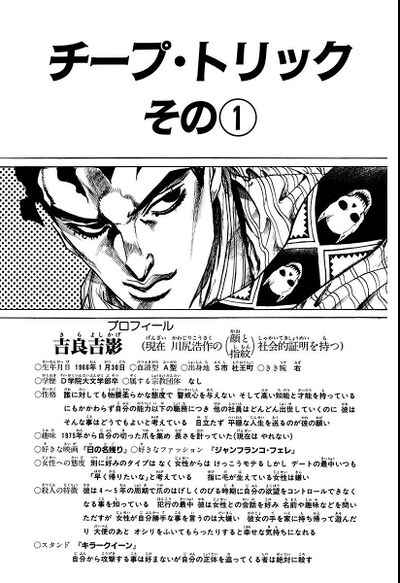 At his home, Rohan discovers a strange boy spying on someone with a camera in one of the photographs he took at the Central Station. He discovers with his magnifying glass that his name is Hayato Kawajiri, and plans to look into the unusual child. Suddenly, someone rings at Rohan's door. Looking through the window, Rohan sees an unknown individual standing at his doorstep. He asks who is it, and the man says that he is Masazo Kinoto, the architect with whom Rohan discussed the repairs of the house. Rohan opens the door, and still suspicious, asks for a business card or an ID. Masazo leaves himself open, and Rohan uses Heaven's Door on the architect, confirms his identity and work, learns that he isn't a Stand user, but also discovers that Masozo hates to have his back being seen by someone.

After taking the precaution of writing that Masazo cannot attack him, Rohan cancels Heaven's Door effect and resumes his conversation with Masazo. However, when Rohan invites him inside, the architect rushes against the door and walks along the walls as to hide his back, going as far as avoiding mirrors. Intrigued, Rohan prefers to focus on the repairs of his house, but when Masazo announces outrageous costs, Rohan gets angry, dropping a pen on the ground by mistake. The architect then puts his back against the ground, crawling against the floor to pick up the pen and offering it back to Rohan. The mangaka becomes curious and decides to look at Masazo's back.