From JoJo's Bizarre Encyclopedia - JoJo Wiki
(Redirected from Antonio "Tonio" Trussardi)
Jump to navigation Jump to search
This page contains changes which are not marked for translation. 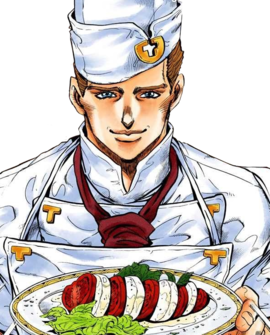 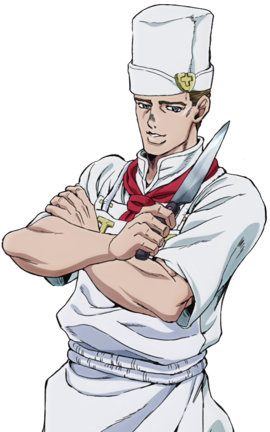 Tonio is a professional chef of Italian

origins working in an Italian restaurant named Trattoria Trussardi, at the edge of the town of Morioh. He is also a Stand User who uses his 'Pearl Jam' to enhance his cooking. 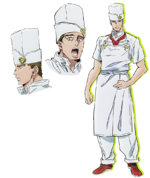 Tonio is only shown in his chef's uniform

, comprising a light or white double-breasted jacket, a loose tie, an apron, and a tall, cylindrical hat. He wears the small, metallic emblem of a "T" at the upper corners of the chest his jacket and apron, and at the frontal fold of his hat.

Tonio also works as his restaurant's waiter and displays a charismatic and courteous personality. It allows him to convince even reluctant clients to try out his dishes. As a chef, Tonio is rightfully furious when a client intrudes upon his kitchen as they bring bacterias from outside. His usual smile turns into a raging grin and while he doesn't turn violent, he still forces the intruder to clean up his kitchen as a punishment.

Tonio is a preeminent chef specialized in Italian cuisine

Tonio originates from Naples with his hometown being Amalfi

Tonio did extensive studies in cuisines all around the world and is extremely proud and confident in the skills he accumulated. Some of these studies include Chinese medicinal arts, Amazonian medicine, and African herbs (as stated in chapter 303: Let's go Eat Italian Part I). During his travels around the world he developed his Stand Pearl Jam, allowing for a much better cooking ability, but no one in his country, Italy, recognized his new ability. Due to being too young he couldn't open his own restaurant there, so he traveled to Morioh where the competition between restaurants is more intense and his chances were bigger.

Tonio's full name is revealed to be Antonio Volpe, the older brother of main antagonist Massimo Volpe. He originally came from a well-known bureaucratic family. As the eldest son, he was supposed to gain the family inheritance when he came of age - but when he voiced his desire to become a chef, he was disowned by his father who was trapped by antiquated ideals of class. Antonio then left his inheritance to his brother Massimo, and he relinquished his surname for his mother's maiden name, Trussardi. Antonio then travels the world, looking for a place where he can establish himself in the world of culinary arts, ultimately settling in Japan.

Several years later, Rohan goes to Tonio's restaurant and is cured of his sleepy eyes. In return, Tonio asks Rohan to assist him in seeking out "Disk Abalone", a Morioh-exclusive fish located in the "Leopard Spotted Rocks" coastline. Though uneasy of the legality of this at first, Rohan agrees to join him out of self-interest. Later that night, Rohan and Tonio travel to the outer rocks and discover a swarm of abalone in the water. Rohan notes that the property belonged to the Higashikata's, which is why fishermen cannot legally sell the fish. Tonio reveals that his true intent for obtaining the abalones was to cure his lover's tumor, an illness that even his Pearl Jam was unable to fix. The two swim into the water and begin collecting a few by hand, though after awhile Tonio suddenly disappears, much to Rohan's surprise. He discovers that the Abalones had the tendency to cling onto objects and were slowly drowning both him and Tonio. Rohan eventually saves them by using Heaven's Door to make a nearby octopus attack the swarm. Later, Rohan, Koichi, Okuyasu, and Josuke are seen dining on octopus in Trattoria Trussardi. Tonio is seen in the kitchen with his lover, Virginia, who is fully recovered thanks to Tonio's new abalone dish.