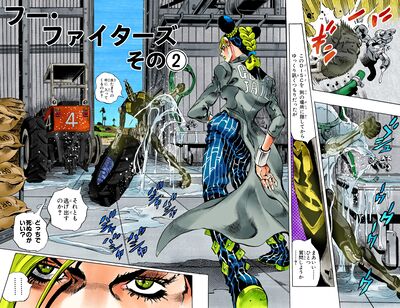 It narrates the fight between Jolyne, Ermes and Foo Fighters, a sentient plankton colony/Stand.

In order to hide the Stand Discs, Foo Fighters runs to the barn. While doing this, F.F.'s double in the water tries to pull away the guard's body in order to cause Jolyne and Ermes' bracelets to explode. Jolyne runs after the main body, entrusting the double to Ermes. Using her Stand, Kiss, Ermes defeats the double and carries the body toward Jolyne and the barn. Inside the barn, Jolyne catches up to F.F. before it can hide the Discs. Jolyne asks about Whitesnake, but F.F. claims to know little of him. Jolyne attacks the Stand with Stone Free. She tries to sneak a string past F.F., but it catches her. F.F. assimilates with the puddle of water on the floor and attempts to merge into Jolyne's body. However, the string was just a distraction. Using another string, Jolyne is able to start the engine of the tractor where the Discs were hidden.

Unbeknownst to F.F., the tractor drove out into the field where Ermes could get to it. F.F. tries to run after the vehicle, but the dry fields destroy its body. Ermes tries to destroy the Stand for good, but Jolyne stops her. She pours water on the Stand, believing that it only exists for Whitesnake's service. She makes a deal with F.F. to become the allies, which F.F. accepts.

Jolyne and Ermes return to the barn and find Star Platinum's Disc. They look for Jotaro's Memory Disc, but F.F., now possessing Atroe's corpse, tells them that only the worthless Stand Discs are stored there. The three see the guards approaching the barn. F.F. hides Star Platinum's Disc in her overalls. The guards apprehend the inmates and take them back to the prison. Later that night, Whitesnake and its user inspect the barn. He figures out that Jolyne has made allies and that she must be dealt with.[1]