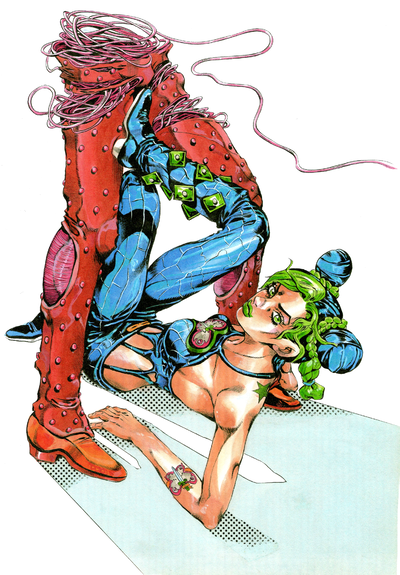 It narrates Jolyne's predicament, shrunken and under Gwess' power, and the full awakening of her Stand Stone Free.

Gwess orders Jolyne to infiltrate the prison's control center in order to scout for a way to escape. The scout goes badly; while Jolyne tries to find the control room, she suddenly starts growing back and is subsequently spotted. Running back to her cell, she sees the Stand Goo Goo Dolls following her and it attempts to kill her for leaving the rat corpse.[1] Jolyne figures that, just like her Stand, no one else can see Goo Goo Dolls. Jolyne is unable to escape before she grows back to her full size and gets stuck between the prison bars.

A humanoid appears from her strings and Jolyne fully awakens her Stand.[2] She calls over a bloodied Gwess, who did not expect her to have an ability, to shrink her again. After shrinking Jolyne, Gwess attempts to have her caught by the guards by dropping the stone from Jolyne's pendant, trapping her in a room. As Gwess taunts Jolyne, the latter uses her Stand to beat her up over the prison bars. She then names it "Stone Free", after her will to free herself from the "stone ocean", and successfully returns to her cell.[3]