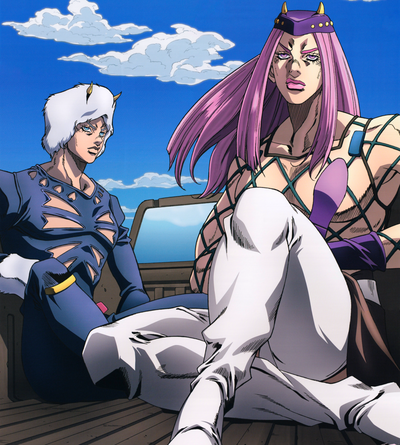 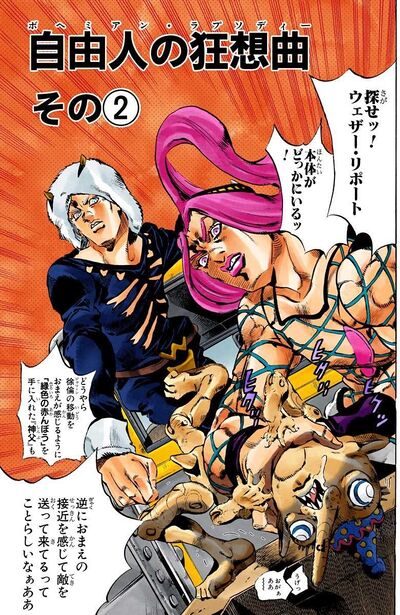 It narrates Anasui and Weather Report's misadventures, caught inside the effects of Bohemian Rhapsody, which makes every fictional character come to life.

Pucci gets into a taxi, which is strangely unable to start up despite being in good condition. Around him, Pucci sees many occurrence of the number 3 and ultimately decides to start walking. As he passes near a hospital, Pucci sees three ambulances arriving with three patients in critical condition; from them, a coin, a bullet and a ring all roll toward him. One of the patients suddenly wakes up and holds Pucci hostage with a pair of scissors. Pucci, now understanding the meaning of the number three, stabs himself with the scissors, shocking everyone present. Disturbed, the hostage holder tries to flee and is shot by the policemen. However, the stick figure in a traffic sign detaches itself and begins to drag the man to safety, revealing his Joestar Birthmark.

Meanwhile, in prison, Weather Report senses that Jolyne has escaped, and Anasui notices a Joestar Birthmark on Weather Report's neck.[1] Three days later, Anasui and Weather hide in a public restroom from approaching police cars, their escape having been less discreet than Jolyne's. Weather helps an old man pick up his groceries, and the old man decides to help them escape in his truck.

The duo decides to head north as Weather feels Jolyne's presence heading towards that direction. On the truck, Anasui notices the characters on the guidebooks and billboards missing. He soon realizes that this is a Stand ability after seeing Pinocchio on the truck, and that fictional characters from every work of art and literature are coming to life. As he is about to alert Weather, Anasui's soul is cloned and he sees his body stuck under the wheels of the truck. The truck soon crashes, with Weather using his Stand to cushion them, and so, after destroying Pinocchio, Anasui is one body again.

However, Anasui is attacked by the old man who transformed into the Big Bad Wolf, separating him once again from his body and Weather, who took a bus without paying attention to his surroundings. Chasing his own double through the town, Anasui is forced into deforming his face in order to evade the police as well as getting dragged into the story of the The Wolf and the Seven Young Goats. Cast as the Wolf, Mother Goat chases him, threatening to cut his stomach open and fill it with rocks.

Meanwhile, Weather Report is dragged along with Vincent Van Gogh's last self portrait and is forced to relive the painter's life. This also makes him fated to cut his ear off and shoot himself in the head. Weather uses his Stand to try and stop the aggressor, whom he senses going north via the birthmark, but Ungalo is already on a plane enjoying the world scale chaos his Stand had caused.

Weather chases after the plane but subsequently collides with Anasui, which triggers Van Gogh's pistol into shooting him. Weather's wounds soon turn to vapor, "drowning" Anasui just like the wolf's fate in the story and melting both of them. Fortunately, knowing Van Gogh's skills as a painter, Weather Report forces him to draw a hero, Put Back, whose story can only end once reality is brought back once again.

After noticing an illustration of Peter Pan and Tinkerbell back in their original cover, Ungalo's Bohemian Rhapsody is soon cancelled and he falls into a coma, having lost his drive with his Stand. Everything returns to normal, and every characters return to their books except Pinocchio.[2] 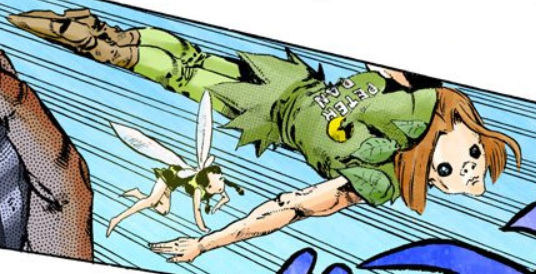