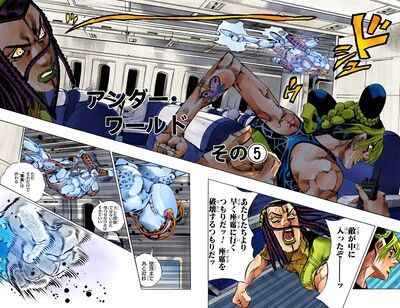 It narrates Jolyne and Ermes's misadventures, caught inside an impending plane crash because of Donatello Versus, a son of DIO, and his memory-unearthing Stand Under World.

In Orlando, Jolyne, Emporio and Ermes arrive at the hospital that Pucci is hiding within. Anasui and Weather also close in on the hospital, though Weather senses another person besides Pucci. Within one of the hospital rooms, Pucci notices that his body and Donatello Versus's are remarkably similar. Though Pucci is calm about Donatello's inability to release his own Stand, he manages to do so anyway, alerting Jolyne to his location in the process.[1]

Jolyne finds the room, and sees a huge hole leading to an underground cavern. Deciding to investigate, Jolyne finds herself in a plane which is scheduled to crash. Donatello's Under World is able to revive memories of the ground and materialize them, having materialized said crash and imprisoning Jolyne in it. Ermes is dragged into the memory as well.

A flashback narrates Donatello's misfortunes and the resentment he has toward the world. Jolyne contacts Emporio, who discovers that some passengers survived the crash. Jolyne and Ermes take their place and also save hapless children in the process. Defeated, Donatello commands his Stand to flee and give Weather Report his Memory Disc back, to Pucci's horror, as he has unlocked a terrible power.[2]