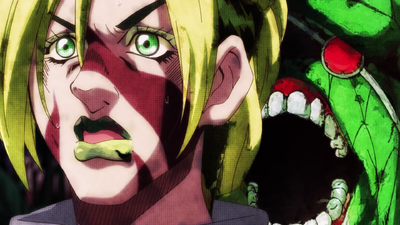 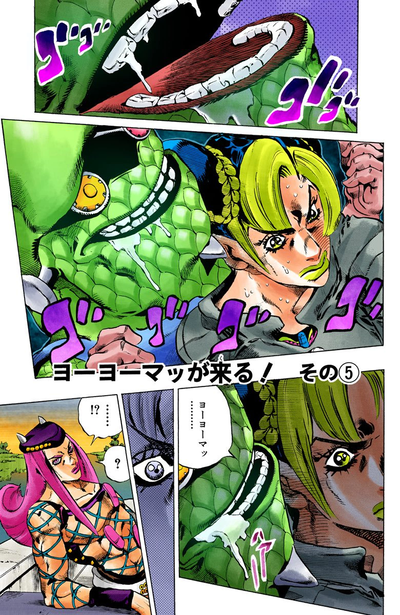 It narrates Jolyne and Anasui's escape through the swamp, accompanied by the servile but malevolent Yo-Yo Ma as Foo Fighters looks for its master D an G.

Jolyne takes the embryo before the plants fully grow on her body, refusing it the fall into Whitesnake's hands. Anasui notices Guccio, who wields the Stand Survivor, slowly turning into a plant and uses him as a trap against the sole remaining Stand user D an G. When Guccio is confronted by D an G, Guccio's ribs burst into his left arm and incapacitates him.

Having opted to escape the punishment ward from the eastern exit and reach the nearby swamp, Jolyne, Anasui and F.F. take a motorboat to cross it. However the embryo, which was in their possession, is swallowed by D an G's automatic Stand Yo-Yo Ma. Both F.F. and Anasui attempt to take it out of its body, but none of their effort prevails. Unable to hurt it, F.F. stays behind to kill D an G while Jolyne and Anasui take Yo-Yo Ma on board. After the motorboat departs, F.F.'s face melts due to the Stand's acid spit.

Jolyne and Anasui are subsequently pursued by the prison guards and have to hide in the swamp. While Yo-Yo Ma temporarily hides them from the guards, Jolyne realizes that she is slowly being melted by the Stand's ability but cannot communicate properly and is incapacitated. At the same time in prison, F.F. discovers that Enrico Pucci is the mastermind behind the attacks.[1]