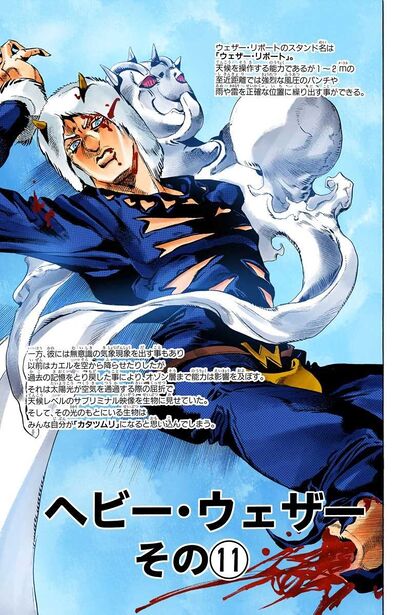 It subsequently narrates the rampage Heavy Weather causes in Orlando, Jolyne and Ermes's attempt to escape it, Pucci's past and Pucci's clash with Weather Report and Anasui.

With Weather Report receiving his Memory Disc, he retrieves his memories back and re-releases his rage at his brother Pucci. Suddenly, Weather Report changes into a new personality, manifesting rainbows in his vicinity. After Ermes' arm touches one of the rainbows, Donatello informs them that this is caused by Weather Report's Stand, which utilizes subliminal messages to transform people into snails with sun rays. Pucci tells Jolyne that to stop the Stand, she now has to either take Weather's Memory Disc back or kill him for good. He and Donatello flee before everyone, including Ermes, starts turning into snails.

A flashback narrates both Weather and Pucci's tragic past. On the 5th of June 1972, one of the fraternal Pucci twins had been stolen and replaced with a dead one. Enrico Pucci would later go into a seminary and, at the age of fifteen, met DIO, who gifted him a stone arrow. Meanwhile, Domenico Pucci, who had lived his entire life as Wes Bluemarine, crossed paths with Enrico's sister, Perla Pucci. They soon fell in love until Wes' mother confessed to Enrico about her son's true identity as a Pucci.

Enrico subsequently hired a private detective to threaten Wes and make him break up with Perla. However, the threatening did not go well as the private detective later discovered that Wes was the son of a black man. The private detective's group then hung Wes on a tree before Perla took him down and, thinking he was already dead, jumped off to her death as well. Pucci was later pierced by DIO's arrow, giving him a Stand, which also affected Wes. After finding out about Perla's demise, Wes attempted to take his own life but failed several times. His rage made his Stand transform people into snails, prompting Enrico to reveal himself as Wes' fraternal twin and took his Memory Disc. Without his memories, Wes Bluemarine started living his life as Weather Report.

In the present, Jolyne and Ermes manage to narrowly avoid the snails and escape the hospital to find Donatello. Meanwhile, Donatello takes Emporio and steals Jotaro's disc. As the two fight Donatello, Weather Report and Anasui are found by Pucci. Pucci explains Weather's hidden ability and renders himself blind to stop seeing the subliminal messages. He fatally wounds Weather and attacks Anasui; Weather takes advantage of this to attack by freezing the blood on the streets and uses them to stab Pucci.

At the same time, Jolyne, Ermes, and Emporio appear, who forced Donatello to drive due to them transforming into snails. Unbeknownst to them, their car crashes into Weather and Pucci. Jolyne exits the car to fight an illusion of Pucci until she sees Weather Report. Anasui then reveals that the priest had already escaped as the snails disappear in the vicinity. The group sees Weather's dead body and mourns for him; Jolyne later acquires Weather's Stand Disc and gives it to Emporio.[1]