Made in Heaven (story arc) 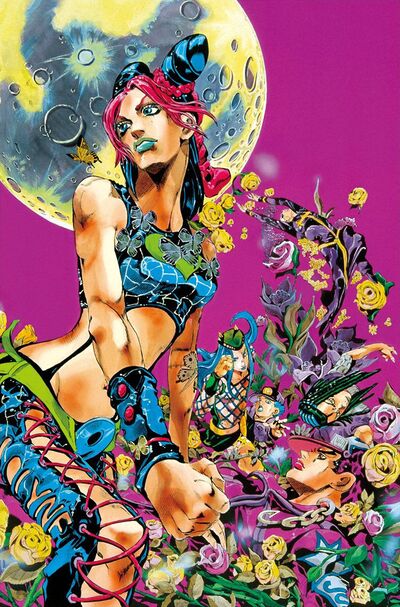 Made in Heaven (メイド・イン・ヘブン, Meido In Hebun) is the twenty-sixth and final story arc in Stone Ocean.

It narrates the Joestar Group's desperate confrontation against Pucci and Made in Heaven, whose power of time acceleration proves to be near unbeatable.

As everyone wakes up, they realize that time is accelerating at a phenomenal rate. The entire world is affected by the time acceleration, ensuing chaos.

Pucci proceeds to hunt down the heroes. To Jotaro's surprise, Pucci's acceleration even shortens his timestop. The party flees out to the ocean, using Kiss and a pistol to fly at high speed. Nonetheless, Pucci attacks. As Jotaro stops time, he sees that knives are falling toward Jolyne, wistfully remembering his past battle with DIO. He pulls her out of danger's way and attacks Pucci, but fails to hit him when time resumes. Despite the team's extensive efforts, horror is in store. Jotaro's head is split in two, Anasui is impaled, and Ermes's arms are sliced off. Jolyne still receives a knife to the stomach, sinking into the water.

Emporio takes a stand against Pucci, but Jolyne hasn't died yet. Blinding Pucci partially with a knife, Jolyne ties Emporio to a dolphin to swim him away. Jolyne sacrifices herself to delay Pucci, not standing a chance. Time accelerates to an astronomical speed, causing every living thing to be brought into a vortex.

Emporio awakens in Green Dolphin Street, meeting bystanders whom he mistakes for Jolyne and Jotaro. He is aware of the future but cannot escape it. Pucci appears and tracks the terrified child, explaining that he accelerated time to a singularity point and brought everyone into a universe succeeding the original one, in which everyone witnesses their future. Pucci reveals his will to have everyone at peace by accepting their fate. As Emporio enters his ghost room and Pucci extends his arm, Pucci realizes that he has pushed Weather Report's Stand Disc into Emporio.[1]

Emporio uses Weather Report to manipulate the atmosphere and create a 100% oxygen concentration in his closed room, and it's affecting Pucci faster because of the accelerated time. Pucci begs for his life, stating that Pucci's actions and DIO's legacy will be for naught if he dies since humanity will no longer be able to attain heaven and witness their true fates. A defiant Emporio puts down his entire argument in one short sentence, stating that "walking the path of justice is true Fate". Weather Report kills Pucci and the universe reaches a vanishing point and resets once more.

In the reset universe, Emporio is stunned to meet alternate versions of Ermes Costello, Narciso Anasui, and Jolyne Cujoh, although Anasui and Jolyne's names are Irene and Anakiss. Irene gently proposes Emporio to go with them. Emporio, upon witnessing the Joestar Birthmark on Irene, begins to cry, only able to say his name. As the reincarnated Joestar Group gets in the car, they shortly meet a hitchhiker who appears to be Weather.[2]