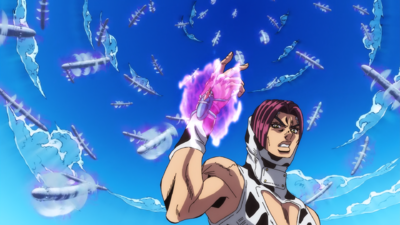 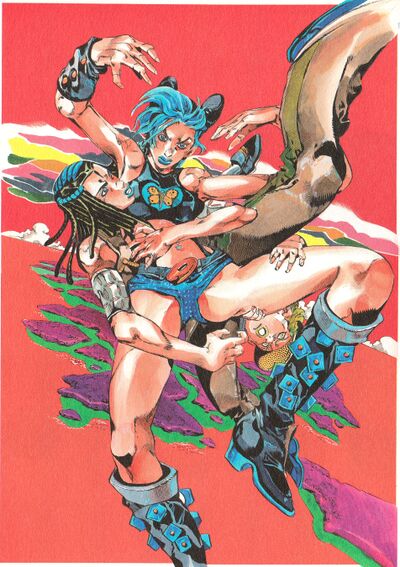 It narrates the confrontation between Jolyne, Ermes and Emporio, and Rikiel, who can somehow cause illnesses to his enemies.

The story goes back in time 8 hours before Narciso Anasui and Weather Report escape prison.

Jolyne appears in Romeo's house after breaking out of jail. Jolyne asks him for some money and a vehicle, which he gives her. Romeo then calls the police, but instead of revealing Jolyne's actual location, he lies to them to lead them elsewhere. Jolyne, Ermes, and Emporio then decide to take Romeo's helicopter to fly to Cape Canaveral.

Back in the hospital, Pucci is plotting with the sons of DIO (except Giorno Giovanna) to eliminate Jolyne and fulfill their destinies. One of DIO's sons, Rikiel, talks to Pucci about his illness. A nervous wreck of a young man, Rikiel constantly suffers from panic attacks which causes him to sweat profusely and his eyelids to droop. After Pucci reassures him of his purpose to his bloodline, he inserts a DISC into Rikiel and tells him about his hidden ability to control strange, flying rod-like organisms. Soon, Rikiel's eyelids start to open again after a high-speed rod appears out of nowhere, and one of Pucci's teeth strangely falls off. He then names the Stand as "Sky High" and prompts Rikiel to leave and utilize his new profound Stand.

Meanwhile, Jolyne, Ermes, and Emporio head to Cape Canaveral in the helicopter they took from Romeo's place. Jolyne tells Emporio to head west near Orlando even though she feels as if the priest is in different directions, not knowing that she had been feeling the presence of DIO's sons, the priest, and Weather Report all at once. As Ermes tells Jolyne to close one of the helicopter's windows, everyone's eyelids suddenly droop and bleed. Ermes notices something flying inside the helicopter as well as her bloated hand, forcing the trio to ditch and crash the helicopter. During their fall, she spots multiple rods chasing them down while managing to take down one.

The three return to their normal state after landing on water and Rikiel reveals himself to them. Knowing he is the User, Jolyne and Ermes quickly deduce that his Stand is merely close-ranged and throw rocks at him, only for the projectiles to seemingly deflect in mid-air. Unbeknownst to Rikiel, Ermes had used Kiss to return the duplicated rocks to her, landing a bloody hit on him. As he panics, Rikiel loses control of the rods and Jolyne finally sees them suspended in the air.

After Rikiel finds the keys to his bike, Ermes's fingers starts to bloat once more and Emporio urinates himself with blood in his urine. Rikiel gains confidence with his rods, locking his target at the three for wanting to hinder Pucci's plans. Jolyne then attacks with Stone Free, but as a rod flies past her ankle, her joints twist backwards. While Rikiel seem to manipulate Ermes's body, Emporio notices that Rikiel is able to do this by having the rods suck body heat, causing various illnesses to the person' organs.

Jolyne begins to have multiple illnesses from the rods to which Emporio tells her to counteract by diving in the water to cool her body off. However, she asks for his ghost lighter and suddenly lights Stone Free's strings on fire, burning her body at the same time. Because he can no longer steal her body heat, Rikiel lights himself on fire as well. He proceeds to target Jolyne's mouth and damages her hypothalamus, causing her vision to only see his afterimages. As a last stand, Jolyne closes her eyes to find Rikiel by his presence alone with their birthmarks and lands multiple attacks on him.

Bloodily beaten and nearly dead, Rikiel tells the three that he has fulfilled his purpose for it was all because of Pucci's attainment to heaven. He mentions that his loss was not because of sheer coincidence and it is all fated to happen - the same reason as to why Weather Report wants to pursue Pucci. He then reveals that Pucci and Weather Report are actually brothers, and an incredulous Ermes immediately knocks him out. With Sky High's User having been put out of commission, the rods fly free toward the skies and the three continue their pursuit for Pucci.[1]