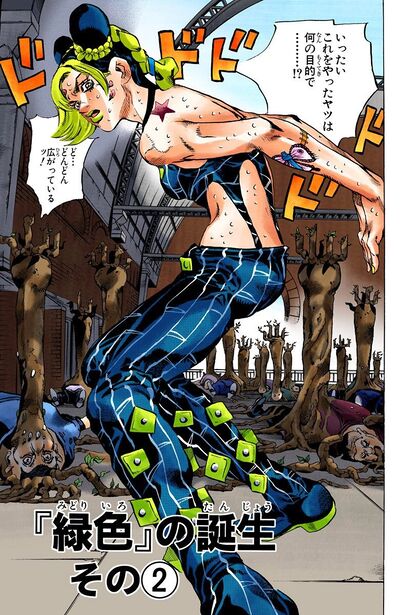 The Speedwagon Foundation continues nursing Jotaro Kujo, noting that his lack of a will to live is causing his muscles to deteriorate. One of the doctors tries to touch his head, causing Star Platinum to instinctively swing its arm in the doctor's direction, smashing his IV. The cuts Jotaro sustains from this action form the word "Jolyne".

In Green Dolphin Street Prison's Ultra Security House Unit, Jolyne remembers an incident from her youth: after finding a wallet on the ground of a parking lot, she is apprehended by the police and charged with larceny. At the police station, Jolyne's mother talks with the police, who agree to let Jolyne go. Jolyne thinks she sees her father approach her, but realizes she only saw a man dressed like him. As she and her mother leave the station, they pass by a psychiatrist talking to other parents; the psychiatrist states that daughters without good relationships with their fathers are more likely to get into crime and bad situations.

Back in the present, F.F. heals Jolyne's wounds. However, a certain wound on her arm, one in the shape of her name, cannot be healed. After going to prison, Jolyne has learned that her father cared for her after all; all he wanted was to protect his family.[1]

Anasui secretly tells F.F. to make Jolyne trip in order to make her fall into his arms. However, before Anasui can catch her, Jolyne spots the prisoner who has DIO's Bone in his possession. The trio attempts to corner the man, only to watch him grotesquely transform into a plant. The man mutters about the sun giving him energy before his body bursts from a flower growing inside him. Every corpse in the punishment ward suddenly blossoms in the same way.

As Jolyne approaches the corpses, Anasui notices buds blooming on her face and stops her in her tracks. However, the buds disappear as soon as she turns around. Anasui deduces that the corpses turned into plants not because of a Stand, but because of the bone; furthermore, Jolyne may have been infected because she attacked the man earlier. He also notes that the plants only grow when their host is hit by sunlight. The trio sees the bone fusing with the corpses' plants, causing it to develop into an embryo bearing the Joestar birthmark.[2] 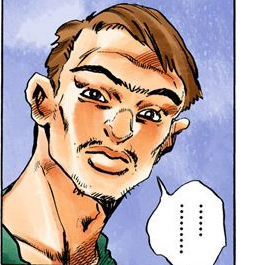