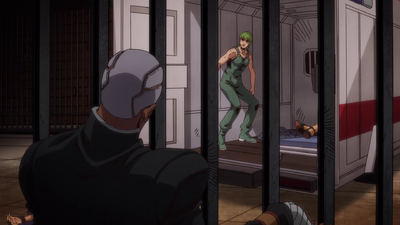 It narrates Yo-Yo Ma's defeat and the fight between Foo Fighters and Pucci.

Jolyne continues to be incapacitated from Yo-Yo Ma's attack. Unable to speak, Jolyne has no other choice but to silently watch as Anasui attempts to take down Yo-Yo Ma.

As Anasui tells Yo-Yo Ma to move away from Jolyne, its acid saliva sprays on to his skin. Anasui demands the Stand to empty its pockets, which contains random items from animals to everyday items such as a band-aid. He soon realizes that Yo-Yo Ma is an automated Stand, having been told by its user to kill Jolyne as its fixed target. The Stand tells Anasui that it will soon kill him for being her ally, and he retaliates by punching it with Diver Down, to no effect.

Thinking its ability might have something to do with the wind, Anasui tells Yo-Yo Ma to speed up the boat. However, the acid spit continues to hit him harder as it had already been mixed with the water around the boat. Before Yo-Yo Ma reaches the controls, it starts to eat the insects that had been from its pockets earlier. The attacks suddenly stop. Anasui then reveals that it had used Diver Down to successfully neutralize Yo-Yo Ma by fusing its brain with a frog. Unable to do its intended task rationally, Yo-Yo Ma's thinking is reduced to that of a frog.

Meanwhile, F.F. wastes no time in finding D an G. While Pucci talks about the soon-to-be born embryo with Guccio's corpse, F.F., in disguise of a medic, points to shoot D an G on his stretcher. However, she is stopped by a medic implanted with a DISC by Whitesnake. Pucci appears from the shadows and reveals his true identity to F.F. as the user of Whitesnake.[1]