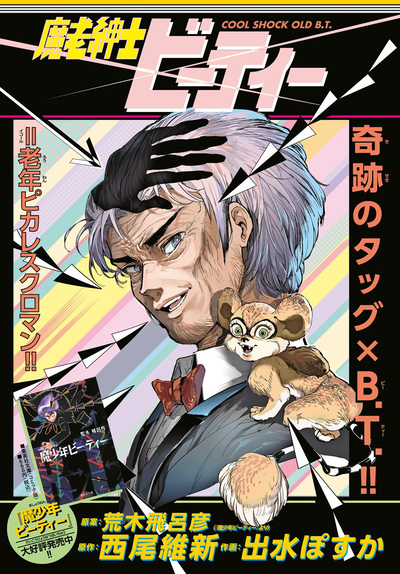 B.T. takes some oriental medicine while they wait, and soon the scammers arrive in the latest electric car model which can drive autonomously. B.T. and Koichi get dressed up using B.T.'s stage clothing, as B.T. was a former drama club member and even now does volunteer performances at child welfare facilities. Koichi dresses like a king, wearing lots of jewelry and the Red Stone of Aja. He pretends to thank the two scammers while they're baffled as to how he suddenly became so rich. B.T. dresses as a butler and brings them tea but as soon as they drink it, the male scammer collapses. B.T. then brings out a blade and intimidates the female scammer, claiming that he poisoned them with tetrodotoxin from blowfish. He says that if they want the antidote, she'll have to tell him where their hideout is and reveal the identity of their boss. Meanwhile, Koichi narrates that B.T. actually just put sleeping pills in the tea and not poison.

At the hideout of the Outlaw Guys, they wonder why the two members are running late. The boss reads through Koichi's Cool Shock B.T. novel and suddenly declares that they'll have to evacuate in two minutes. Before they could, B.T.'s car crashes through the building. The boss reveals himself to be Manabu, claiming that he knew they'd try to hit him with a car again since they did with an ambulance 60 years ago. However, B.T. doesn't recognize him. Manabu reveals that he already sold Koichi's house for seven million yen. He offers B.T. to make a bet. If he loses, he'll buy the house back since he still has the contract, and if he wins then he'll take B.T.'s vintage car. B.T. accepts and Manabu explains the rules. He reveals a pouch full of coins and says they'll gamble by scattering all the coins across the slanted tables, with the winner having to guess whether there will be more heads or tails. B.T. inspects the coins and asks where he got them from. Manabu replies that he blackmailed an old lady in a candy store by mentioning that her reputable grandson may have knocked up a teenage girl, so she ran around collecting money for him so he doesn't spread the rumor.

B.T. says he's fine with the game but would like to change the rules. He suggests that they decide the winner based on whether the difference between heads and tails will be an odd or even number. Manabu agrees and chooses that it'll be even, so B.T. goes with odd. Koichi is the dealer and tosses the coins as the game begins. Koichi notices that B.T. was palming a coin that he pickpocketed. If he placed an extra coin on the table, B.T. could ensure the difference would be an odd number. However, Manabu also had a coin hidden in his palm. Manabu notices B.T. move his hand so he also places his hidden coin on the table in order to make it an even number. He declares that he's the winner and laughs until he notices that it's actually an odd number. Dumbfounded at his loss, Manabu unsheathes his cane to reveal a sword and charges toward B.T. However, B.T. had hacked the autonomous car of the scammers beforehand and set it to target Manabu. Manabu is hit by the car and his sword goes flying, landing beside B.T. and puncturing his vintage car's tire.