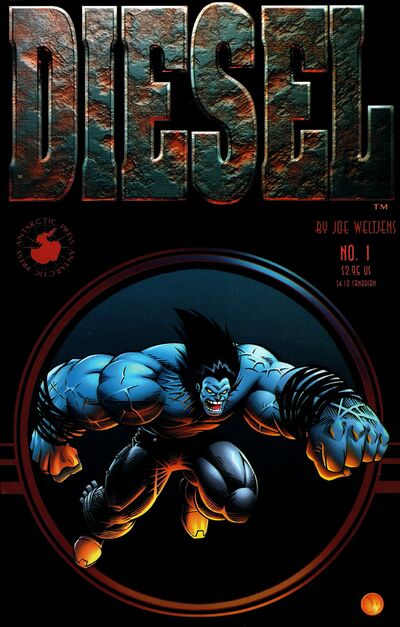 Comic
The information below derives from an unofficial source not authorized by Hirohiko Araki or Lucky Land Communications.
“
ENEMY STAND!!!
”
—Thomas Diesel, Diesel #1

Diesel is an American comic by Jochen "Joe" Weltjens published by Antarctic Press in April 1997. No subsequent issues were ever published after the first issue. When the comic was rediscovered by fans in 2016, it was found to be highly influenced by JoJo's Bizarre Adventure.

Antarctic Press, an American comic book publisher, is recognised for its "American manga" style of comic books. When the comic garnered new popularity in 2016, a user on the Super Best Friends Play fan Reddit who was familiar with the publisher asked Antarctic Press's office manager Doug Dlin for further information. Dlin informed the poster that the author of Diesel, Joe Weltjens, had gotten a fan-subtitled copy of the JoJo's Bizarre Adventure OVA at some point.

Weltjens went on to become the editor-in-chief of Antarctic Press and a colorist for Marvel Comics in the years since the book's release.[1]

The only chapter released of Diesel is a loose adaptation of the Stardust Crusaders story arc "'The Fool' Iggy and 'God Geb' N'Doul", which was featured in Episode 8 of the OVA. Although Diesel was published before the OVA was released in America, it had already been released in Japan a couple of years prior.

The story begins in a mansion, where the protagonist, Thomas "Tom" Diesel, utilises his Stand Meta Hammer to break into a room where Mr. Botha awaits him. The scenario flashes back three months to a meeting between Mr. Evans and Botha to discuss business when Botha murders him using his Stand abilities. The action then shifts to Great Britain, where Thomas is reunited with May Evans after months apart when he is attacked by Joseph ("Joey"), an electric Stand user. May breaks up the fight, and Tom is greeted by Chewbacca ("Chewie"), May's dog.

May brings the two to the house to introduce Tom to the other Stand users who have gathered: Alex Oliver, Jet Lee, and Thomas's old friend Azizi. May then informs Thomas that her father has been killed. That night, May tries to get Thomas to open up to her about Ryuo, the Dragon King. However, Thomas is only interested in knowing who killed her father, which she refuses to tell him. She feels that they will be more powerful if they battle the man together, as he murdered both of their fathers and they both seek vengeance.

The group is unaware the next morning that a blind blood-manipulating Stand user is hiding in the woods around the house. The blood Stand renders Joseph unconscious when he is outside investigating. Chewie starts barking, so the group thinks he's in trouble. They eventually find him, still alive. When May inquires about the enormous blood puddle, he informs them that it is actually a Stand. However, the Stand suddenly decapitates him. The gang hides, but Thomas is unable to find the Stand user since he believes he is too far away to be detected. The Stand attacks May after she steps on a twig, revealing that the user locates its victims by sound. The party attempts to flee, but Alex's legs are severed by the Stand, leading Jet Lee to save him with his own Stand. The blood Stand user is then taunted by Azizi, who summons his own fire-based Black Templar Stand, which compels the blood Stand user to flee.

Thomas and Jet Lee manage to get May and Alex into a car, and Tom asks Azizi to take them all to the nearby hospital, as he and Chewie will deal with the Stand user on their own. Chewie finds the user, but Tom realises he's making too much noise, so he uses Meta Hammer to make him fly through the air while he searches for the user.

The user realizes he's in the air and uses the blood to attack Tom, who plummets to the ground. After Tom uses Meta Hammer to demolish numerous trees, disguising his whereabouts, the user attacks Chewie when he realizes someone is near. The user has no idea where Tom disappeared to but soon realizes that the man is right behind him. Tom uses Meta Hammer to knock the user out just as he was preparing to attack. Tom demands to know who the man is and who sent him here. However, the man claims he can't tell Tom anything. Just then, he is suddenly slain by a long-haired samurai-styled Stand. Thomas identifies its user as a man called Chibot, who then greets Thomas and tells him that he has passed the first test before suddenly disappearing.