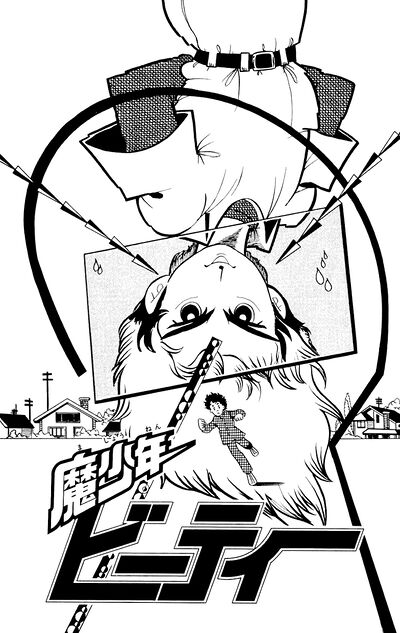 B.T. "The Wicked Boy" (魔少年ビーティー, Mashōnen Bītī) is the one-shot pilot chapter of Cool Shock B.T. before it got serialized. It was first published on October 23, 1983 in the December issue of Fresh Jump.

The one-shot was also included as the third chapter in the volumization of Gorgeous Irene.

The story begins with B.T. and Koichi walking together when an upperclassman suddenly appears. B.T. and the senior play a game (which they seem to have been playing for some time) in which B.T. tosses a coin in the air and catches it, and the senior tries to guess in which hand the coin is. However, the senior loses again and must give 100 yen to B.T. As he angrily throws the coin at the ground, he demands a rematch but B.T. refuses. When the senior leaves, B.T. cheekily shows to Koichi that he had been hiding the coin behind his fingers to trick the senior. Then, an upperclasswoman gives the coin to B.T.. It is Fuyuko Nakagawa, a girl B.T. has a crush on. Seeing B.T. frozen still because of his shyness, Koichi teases his friend about Fuyuko.

Later on, B.T. and Koichi see Fuyuko being arrested by the police and learn that she's accused of having murdered a reporter. At the police station, a fat policeman interrogates Fuyuko, who confesses to the murder. Supposedly, the reporter had invited Fuyuko in his house because he had found her wallet but then had tried to assault her. She defended herself with a pair of scissors and accidentally stabbed the reporter in the back before fainting from the shock. A child and a pair of policemen stumbled upon the scene and Fuyuko was quickly arrested for murder, even if it was in self defense. Upon learning of this story through a policeman, B.T. decides to investigate the house and prove Fuyuko's innocence.

That night, B.T. and Koichi break into the reporter's house and stumble upon a secret envelope full of incriminating photos. The next morning, B.T. calls the fat policeman and accuses him of the murder. In truth, the reporter was merely hurt since he was able to rip his rug and it was the fat policeman (the only one who was present, alone and conscious when the reporter died) who finished him off. Moreover, B.T. shows a photo of the fat policeman working with the yakuza and concludes that the policeman must have had killed the reporter because he was being blackmailed. The policeman draws his gun to kill B.T. but the latter throws a rubber band at the policeman's eyes, blinding him for a second before hiding somewhere. Koichi and a second policeman reveal themselves and arrest the fat murderer. It is revealed that B.T. had hidden underneath a table and used two mirrors to cover his hiding spot.

Fuyuko is declared innocent and freed while the real murderer is imprisoned. However, Koichi has in his possession a photo of Fuyuko stealing a wristwatch. Koichi anxiously realizes that Fuyuko was also being blackmailed for her crimes. Worse, perhaps she actually intended to kill the reporter and made up the assault story to cover up her crime.

Author's Note
“
I love doing magic tricks, but I always get caught quickly. I want to be as cool as B.T.!
”
—Hirohiko Araki
“
手品が大すきだけど、すぐバレちゃうのだ。ビーティーみたいにクールになりたい（フレッシュジャンプ82年3号）
”
—Hirohiko Araki
Author's Note
“
B.T. "The Wicked Boy"
This short story was a pilot version (prototype) of the serialized Cool Shock B.T.. The theme of the story was intended to be the inverse of Sherlock Holmes, but my editor criticized me for calling my main character a "wicked boy." It's worth noting that there was no such thing as "psycho horror" back then.
”
—Hirohiko Araki
“
『魔少年ビーティー』
連載された『ビーティー』のパイロット版（試作品）的な短編． シャーロック・ホームズの逆的な魅力を目的としたテーマだが、少年マンガに「魔少年」なんて主人公を出すのはやめなさいと、編集部から批評があった。まだ「サイコ・ホラー」とかなかった時代。
”
—Hirohiko Araki