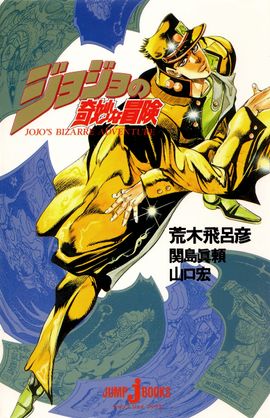 released for the series, written by Mayori Sekijima and Hiroshi Yamaguchi, with illustrations by Hirohiko Araki. Released in both Japanese and Italian, the Italian version adds the subtitle The Genesis of Universe.

It tells two original storylines set in Stardust Crusaders. The story in this book recounts events that are completely unknown in the manga that take place in the course of the adventures of Jotaro Kujo and his comrades. Their march to the lair of DIO is interrupted by three powerful Stand users. The first chapter is titled "One-Way Trip from the Desert to Hell City" (砂漠発行, Sabaku-hatsu Herushiti-gyō) and the second is titled "The Gravestone of Red-Hot Sand" (熱き砂の墓標, Atsuki Suna no Bohyō).

Chapter 1: One-Way Trip from the Desert to Hell City

After their confrontation with N'Doul, Jotaro and his comrades are forced to find their way out of the Nubian desert on foot, their jeep having accidentally broken down. The group wanders in the desert for four days with little water and food left, whilst trying to survive the assaults from a mysterious Stand capable of turning mirages into concrete objects. Joseph and Polnareff are particularly sensitive to the scorching beams of the sun and Kakyoin's eye injury is getting worse.

On the fourth day, at about 1:00 p.m., the six Stand Users are caught in a sandstorm. As they try to find a way out of the storm, they eventually come across a diesel locomotive in the middle of the desert, still functioning and ready to leave. In spite of the possibility of a trap, the group soon realizes that they have no choice but to get on the train. They decide to risk it and ride the locomotive to reach Aswan.

The locomotive is particularly bizarre, looking like a strange mixture of old and new technology. Absalom, the train driver, politely welcomes Jotaro and the rest of the group, announcing from his cabin through a loudspeaker that the locomotive (called Satanic Coupler) will reach Hell City at 4:00 p.m.

After having rested for one hour, Kakyoin notices that the sandstorm has finally stopped. His comrades however are astonished by the incredible landscape that is now surrounding the train: hundreds and hundreds of mirages all around them, produced by the same Stand who had attacked them in the previous days. Trying to get off the train, the group realizes that the doors and window panes won't open and that Satanic Coupler is actually a Stand controlled by Absalom. The evil Stand user reveals that he just couldn't have left them dying in the desert; he wants to kill them all with his own hands and also wants them to suffer as much as possible before dying, apparently, because of their crime of being "part of the civilization".

Satanic Coupler proves to be immune to all of their attacks; the rubber inner walls of the Stand cause the attacks to get reflected back at Jotaro and the others. Deprived of their physical strength, Absalom has them immobilized and forced to be psychologically tortured by the visions of the mirage Stand. Driven by his curiosity concerning the appearance and functionality of modern trains, Absalom decides to suck the information he needs from his hostages and to use the data he has collected to upgrade his Stand. Despite being physically and mentally exhausted, Jotaro and Polnareff come up with an ingenious trick to fool Absalom; they manage to temporarily free themselves and to create an escape by informing the Stand of the existence of openable windows on locomotives. The Stand immediately upgrades its previously fixed windows, unwittingly providing an escape route for its prisoners.

Jotaro and Polnareff bounce off the train, but are capable of freeing only Iggy, while the others are still trapped inside the locomotive. They escape in the streets of the mirage city created by the mirage Stand, but Satanic Coupler effectively tracks them down. Cornered, Iggy activates The Fool and uses it to attack the window pane of the driver's cabin from which Absalom is controlling his Stand, sitting next to his sister Michal, the wielder of the mirage creating Stand: Dark Mirage. Frightened by The Fool's attack, Michal withdraws her Stand, causing the mirage city to disappear. Iggy manages to temporarily deprive the enemies of their sight by covering Satanic Coupler's window pane with his sand. Jotaro, Polnareff and Iggy hide under Jotaro's uniform while Absalom leaves the battlefield, believing them to have flown away with the dog's Stand.

After the sunset the three Stand Users are rescued by villagers living in a nearby oasis. The village chief gives them food and water and reveals that Absalom used to live in their village until four years ago. He then tells them Absalom's story. As a child, he used to believe that the civilized world was the promised land. He was particularly fond of trains and railways, his biggest obsession. Four years ago, while Absalom was visiting Cairo with his sister and his parents, the bus they were riding stopped on a grade crossing and was crushed by a train. His parents died, Absalom's legs were broken and Michal had her throat slashed by a steel splinter. The rescuers gave priority to the local residents and wealthy people, meaning that he and his sister were the last to receive assistance. As a result, Michal lost her voice and Absalom developed a strong hatred towards the civilized world. He later met a man called DIO in Cairo who persuaded him to become his servant after promising to heal his sister's wound and giving them both a Stand.

The following morning Jotaro, Polnareff and Iggy leave the village in order to set the others free, having being informed on Absalom's whereabouts. Absalom has upgraded his Stand once again and it is now faster than ever. Attempting to kill Jotaro, Satanic Coupler accidentally rushes against a little kid from the village, forcing Polnareff to take the kid back to the village for medical assistance. Jotaro and Iggy are left on the battlefield. Coming up with an ingenious scheme, Iggy creates a Jotaro sand clone and use it to fool Absalom while Jotaro manages to board Satanic Coupler, destroy its tow hook and free his comrades by detaching the wagon from the locomotive.

Cornered, Absalom exploits Michal's Stand to recreate the mirage city and starts chasing them. Meanwhile Polnareff has come back from the village and falls in a flaming trap set by Michal. He however manages to locate her position by closely analyzing his surroundings and stabs her with his Silver Chariot. Jotaro believes he has finally found a way to defeat Satanic Coupler, but needs his grandfather's help. Joseph uses his Stand to cut his mechanical arm off and throws it in between the locomotive's wheels. Now unable to move, Satanic Coupler is repeatedly hit by Star Platinum's fist barrage directed at his weak spot: the lower part of the locomotive.

The two Stand users are defeated, but Absalom won't give up. As a last resort, he creates a miniaturized version of his Stand and uses it to enter Avdol's body, threatening to kill him. However, Kakyoin and Jotaro easily handle the situation by miniaturizing their own Stands and destroying Satanic Coupler in Avdol's body.

Jotaro and the others are forced to leave the battlefield in a hurry; the villagers have arrived and believe them to have injured the little kid, as well as their friends Michal and Absalom. A tear falls from Absalom's eyes, who now understands where he and Michal really belong. The group safely reaches a civilized town and is able to continue their journey.

Chapter 2: The Gravestone of Red-Hot Sand

The second story line is set after the battle against Hol Horse and Boingo.

In Cairo, Polnareff is ambushed by a seemingly endless amount of enemy Stands in the form of mummies and ancient warriors. While trying to escape, he is taken by surprise and crushed by an ancient Roman war chariot. Believing him to be dead, a strange old man comments the battle and goes looking for Polnareff's friends.

While visiting some bookstalls in the streets of Cairo, Joseph and Avdol sense the presence of an enemy Stand User. In order not to get the local people involved, they enter a nearby alley. The enemy introduces himself as The Scribe Ani, a mummy-like old man wielding Ptah, a book Stand capable of summoning the historical events written in its pages. While the two are facing hordes of soldiers, Polnareff comes to rescue his friends. Ptah summons the giant stone statue of an ancient high priest and makes it crumble, its pieces falling on the Frenchman. Avdol attempts to help his friend but he is severely injured by an ancient Roman soldier's attacking him in the back. Using their Stands to communicate, Joseph and Polnareff come up with a scheme to defeat the enemy Stand: they perform a pincer attack and manage to slightly damage the book, but are overwhelmed by yet another army summoned by Ani.

In exchange for buying a bottle of perfume, Jotaro learns from a merchant that his friends have disappeared in a nearby alley and comes to the rescue. Ani decides it is time to show them the most powerful creature hidden in the book's pages: the beast-goddess Ammit. The creature is so powerful that even Star Platinum cannot stand a chance against it. However, the creature suddenly disappears. Joseph and Polnareff have actually managed to locate and destroy the part of the book's in which the powerful goddess Ammit was described by combining their Stand powers. Ani attempts summoning something else to destroy the group but Jotaro successfully blinds Ani by throwing the perfume bottle he had previously bought at him. Star Platinum proceeds to destroy the mummified body of the old man, also destroying Ptah in the process.

The chapter ends with the characters healing their wounds and commenting on Ani's true identity and nature.

Characters from JoJo's Bizarre Adventure: The Genesis of Universe 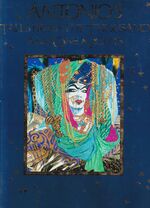