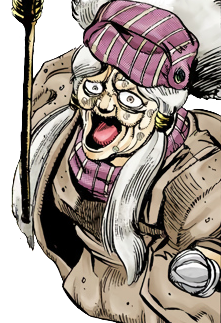 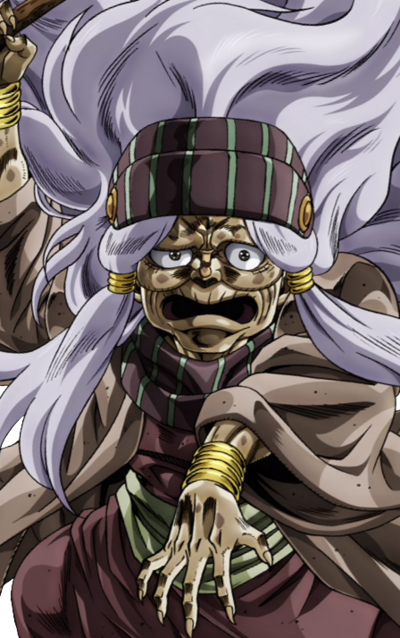 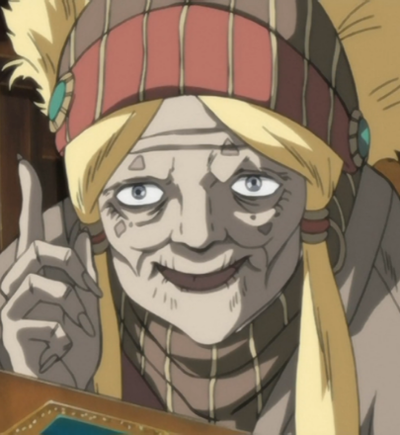 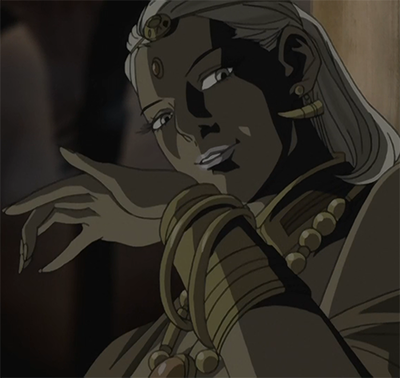 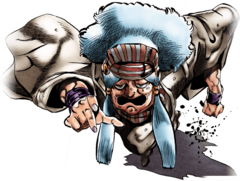 As a servant of DIO, Enya is quite malevolent. Her first act is to send seven Stand Users to assassinate the Joestar Group.[3] When she uses Justice, Enya also takes pleasure in humiliating her victims, perhaps out of a will to get revenge, and has, for instance, forced Hol Horse to swallow his hand and then shoot himself with his own Stand,[4] but also wanted to make Polnareff lick her toilets clean.[5] Enya has a materialistic approach to life, stating that humans live to obtain what they want, be it money, sex or power.[6] She also gratuitously strikes a cat with a cane on her way out.[7]

Enya is one of DIO's most devout followers. She notably thinks the world of him, believing that with his Stand The World, he is invincible and the Joestars cannot hope to defeat him;[8] on another note, she worshiped DIO so much that she refused to believe that he ordered her execution.[9] Fascinated by the Vampire, her ambition was to stay by his side and witness his life.[3]

As a mother, Enya deeply loves her son J. Geil to a twisted degree. Because he served DIO, Enya thinks of him as a noble man and assumes that the heroes only defeated him because of a dirty trick.[10] At the same time, she seemed to either ignore or think nothing of the crimes he's committed. She shares a link with her son which makes her receive the same damage he does, and it is through this link that she learns how her son was killed by Polnareff. Horrified by the fate of her son, Enya briefly cries over her offspring's death before succumbing to rage and vowing to kill the Joestar Group herself. She also wanted Hol Horse dead as soon as she knew he didn't help J.Geil against Polnareff, claiming he had as much of a part in his death as the Crusaders.[11]

However, all seven Stand users fail and her son is killed, causing her to cry angrily and swear revenge on the group while stating that serving DIO is the only purpose she has left. She then uses her Stand to change the desert graveyard into a large town in Multan, Pakistan, using the people as puppets.

Enya is killed by a flesh bud

Enya is later brought along to Karachi so that the heroes can interrogate her about DIO's ability. When she wakes up, she recognizes Steely Dan and tries to explain that she hasn't revealed anything. Still, Steely Dan says that DIO ordered her execution anyway because she knows too much and activates DIO's flesh bud that he secretly planted within her brain. Agonizing from the flesh bud inside of her, Enya is asked what is DIO's ability by Joseph. However, she refuses to believe DIO wouldn't trust her and keeps silent about DIO; subsequently dying in Joseph's arms.

Enya was created as an answer to the question as to who taught DIO about the existence of Stands. Hirohiko Araki had a vague idea to make a witch-like fortuneteller, and also wanted to have a scary old woman as an enemy. He compares the series to horror films, considering them to be his teachers and textbooks, and says that "you can't have a horror film without a scary old lady". He tried including all the usual tropes of scary old ladies in horror films; Enya hiding in waiting for the main characters to show up, having a hidden knife, and the likes.

Araki says that he had a fantastic time drawing Enya, as she is chock-full of all his favorite aspects of horror. However, he's still not sure if she is an appropriate villain for a shonen manga. He says that it's pretty "adventurous" to have an old woman as an antagonist, and the ratings didn't necessarily go up during the time either. He also says that there's no mistaking that the ability to convey her strength and horror as a character despite the fact that she's an old woman is something unique to the series due to Stand battles.

As Enya is the "cover girl" for JoJonium Volume 11, Araki put a lot of detail into the drawing, and also made her eyes look more friendly than usual.[12]

Enya appears in Diamond Records as a playable character in both the Action Battle and Tactical Battle game modes. She has a variety of unlockable statues varying between the 'Tactical' and 'Unity' types, ranging from 4 stars to 6 stars. Enya's moveset in both game modes is comprised of various attacks inspired by the anime, using her stand Justice.
Moveset

Enya's basic attack string is a combination of up to five various strikes using her staff. In Tactical Battle, this is cut down to only three hits.

Enya throws a pair of scissors that functions as a projectile.

Enya summons a minion to attack the opponent with its tongue. (Unlockable)

Enya summons a minion to assist her in battle for a short period of time. Multiple allies can be summoned at once. In Tactical Battle, the minion shows up to throw a scythe once before leaving.

Enya summons Justice to temporarily buff herself and her summoned minions. In Tactical Battle, she buffs her entire team. (Unlockable)

Enya throws a pair of scissors at her opponent, triggering the cutscene where she summons Justice to deal damage to the targeted opponents using its fog. 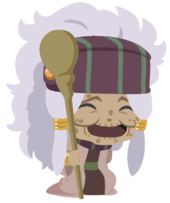 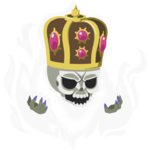