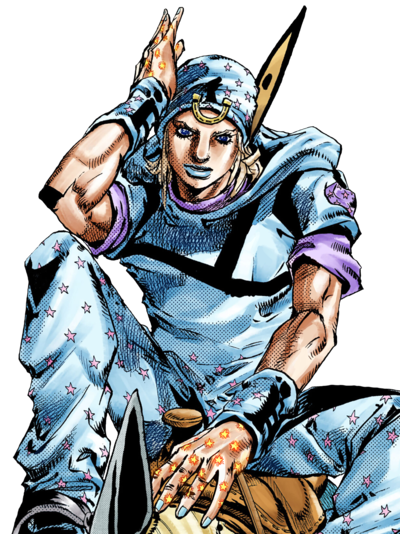 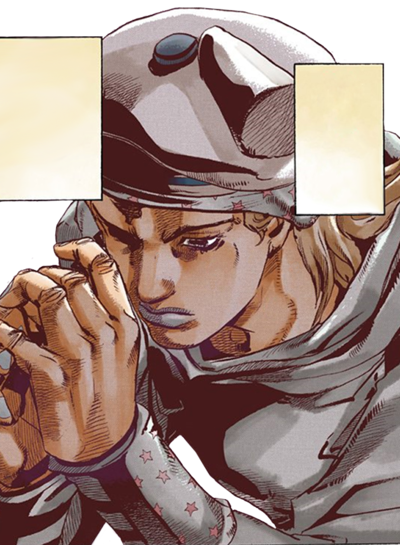 Head fatally crushed by a boulder

Johnny Joestar (ジョニィ・ジョースター, Joni Jōsutā), born Jonathan Joestar (ジョナサン・ジョースター, Jonasan Jōsutā), is the main protagonist of the seventh part of the JoJo's Bizarre Adventure series, Steel Ball Run, and the seventh JoJo of the series. He also appears as a posthumous tertiary character in JoJolion. 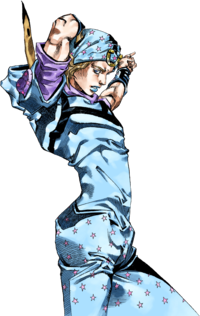 Johnny always wears a knit cap, printed with many small five-pointed stars. His hair sticks out of holes on either side of the top, taking a shape like short horns. A horseshoe hangs from the front; framing an image of the dark silhouette of the profile of a horse's reared head. While it is not seen, Johnny bears the Joestar Birthmark, as Lucy Steel is aware of it.[7]

As a child, Johnny wears a long-sleeved blue top with stars on them, a light blue coat tied round the waist as well as light brown pants and blue boots.[2]

Johnny is introduced as a distant paraplegic man whose career was ruined when he was shot in the spine after conceitedly antagonizing a passerby.[8] After Johnny witnesses Gyro's Steel Balls and Spin, and how they enabled him to stand up on his feet for a moment, he becomes determined to follow him and make him teach the Spin,[9] then after discovering the Corpse Parts making his legs twitch, to acquire them. 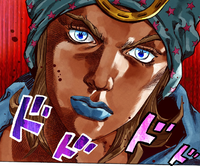 Johnny stubbornly follows his intentions of following Gyro then track the Corpse. Disregarding the risks or the consequences, Johnny focuses on his goal and puts it above anything else. Several times, Johnny endured severe wounds to reach his goals, notably trying to get on his horse Slow Dancer, which earned him many bruises and a wooden shard through the leg;[10] despite his repeated failures, his determination to participate in the race didn't waver. Inversely, Johnny has no qualm about being violent or killing his opponents to get the Corpse Parts. Gyro Zeppeli has mentioned that Johnny had, "dark determination" in his eyes, indicating a ruthlessness that would make Johnny kill in cold blood.[11] This amoral selfishness still extends to the interest of his loved ones and followed him during his whole life, demonstrated years after the Steel Ball Run, as when his wife Rina was struck with the Rock Disease, Johnny then stole the Corpse to beg it to transfer the disease away from her, not caring who would receive it and suffer in her stead.[12] Yet Johnny isn't completely amoral, for instance objecting to involve the defenceless Lucy Steel in their struggle for the Corpse [13] and ultimately taking the Rock Disease for himself to save his son.[14] 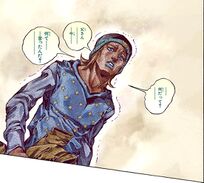 Shocked by his father believing God had taken the wrong son

During the Steel Ball Run race, Johnny was burdened by depression and a subsequent lack of confidence. Notably calling himself a useless person, Johnny's bleak outlook of life stemmed from his youth. Johnny was a timid yet kind child during his childhood, adopting a wild mouse and calling it Danny. Though he was afraid of his harsh father George Joestar, he would try to live up to his expectations. Johnny idolized his older brother Nicholas, but when he died, falling from a horse that was seemingly startled by Danny, Johnny became guilt-ridden, believing that his brother's death was his own fault and that he should have died. He then believed throughout the years that fate itself was taking revenge on him for his crime and that every misfortune he received was in fact deserved.[2] It resulted in his obsession with the blessing of the Corpse, which would reset his karma to a neutral state of “zero” instead of the “negative” state of his curse. It also explains Johnny's rampant lack of confidence and near-constant bouts of panic.[15][16] as he thought that fate could at any moment take away his hope of acquiring the Corpse. When Johnny's father disowned him, Johnny shut himself off, creating a facade of conceitedness to hide the sadness this rejection caused him.[2] 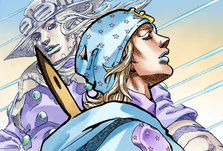 Johnny's perspective improved greatly upon meeting Gyro Zeppeli. Having met someone who gave him hope and was genuinely nice to him, Johnny felt grateful[17] for meeting the Italian executioner and treasured this relationship, at one point being willing to abandon the Corpse Parts he had to save his friend.[18] Gyro repeatedly knocked Johnny out of his lack of confidence and helped him get the Corpse Parts, giving him assurance and optimism in life.

As reflected in the multiple ACTs of his Stand Tusk, the improvement was gradual, the key steps of his progress being Johnny discovering the Corpse (ACT 1),[19] then standing up for himself against Soundman (ACT 2),[20] symbolically cleansing himself of his guilt against Axl Ro and being blessed by Jesus Christ's apparition (ACT 3)[21] and finally acquiring the Corpse and regaining the use of his legs (ACT 4).[22] Although Gyro died, Johnny kept a good memory of everything that happened. If during the race, Johnny was uncaring of everyone else save himself and Gyro, only maintaining a polite but cold demeanor at best toward the people he met, Gyro's influence made Johnny slightly more friendly toward people, culminating in his marriage with Rina Higashikata.[23]

In JoJolion, a flashback shows that Johnny maintained that happiness during his short life with Rina.

According to Araki, he always wanted the protagonist of Part 7 to fight against nature itself while at the same time, having his struggles help him on a path to maturity.[26]

Araki personally liked the Jonathan-Zeppeli relationship from Phantom Blood and wanted to retell it again for a longer coming-of-age story. He chose to make Johnny and Gyro around the same age so they could be less formal and more friendly than their original counterparts similar to the Joseph-Caesar relationship from Battle Tendency.[27]

In the first chapter, his name is written in Japanese as "Jonī" (ジョニー), whereas from the second chapter on, it is written as "Jonyi" (ジョニィ). Both have the same pronunciation, however.