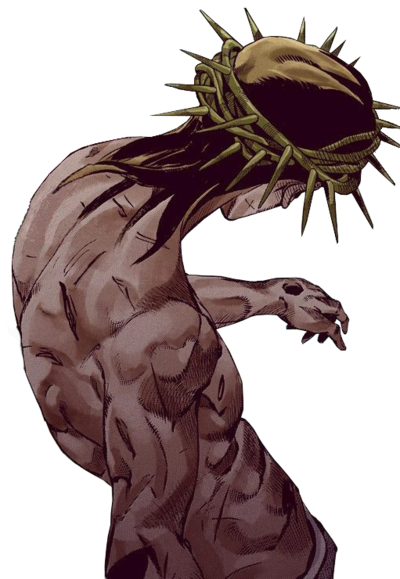 He appears in proximity to the Saint's Corpse, which represents a symbol of purity.[3] He is heavily implied to represent the biblical and much-venerated Son of God in Christianity, Jesus Christ, and is referred to as such once by Johnny Joestar.[4]

He has long, dark hair and a body covered in scars. He appears either clean-shaven, with a mustache, or with a light beard.[4]

In his flashback, he wears a large linen robe. His face is unseen, obscured by the shadow of his hair or his robe.[2] In his later appearances, he wears a crown of thorns, and bears the Holy Wounds on his hands and feet (the only one not seen being his chest wound).

Jesus is solemn and direct, inspiring awe in everyone he meets as a messiah.

He lacks partiality, as his Corpse Parts benefit whoever wields them. At times, Jesus makes his presence aware to people carrying his Corpse Parts. The guardian of his corpse protects Lucy Steel and advises her.[5] He also advises Johnny Joestar, who can see him, feel his presence, and hear his voice.[4]

Jesus appears to Blackmore
“
Nobody has ever met him in this modern age... A sensation of being embraced by light! His presence! This Holy Corpse! I could only guess who it belonged to! But... now... I am sure! 'He' has shown himself to me! Only to myself!
”
—Blackmore about Jesus, SBR Chapter 38: Catch the Rainbow (On a Stormy Night...), Part 1

Jesus is capable of appearing and speaking to certain individuals through his corpse parts. Blackmore feels as if he was embraced by light.[6] Johnny claims that he could even hear his breathing and feel his body heat.[4]

Jesus's Corpse Parts occasionally merge with the analogous body parts of individuals coming into contact with them, upon which some develop unique powers or Stands.

Lucy Steel's Stand, Ticket to Ride, is implied to be the Stand of Jesus's complete corpse or living self. The Stand manifests as a set of abilities that protects Lucy by redirecting her misfortune.

In JoJolion, his corpse is described as having the power to cause the phenomenon of "removal," making it capable of performing an equivalent exchange. Thus, it could remove one's disease for something of comparable value.[7] 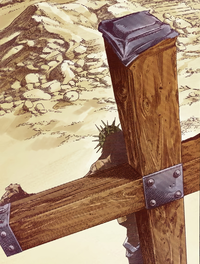 Crucified on the hill of Golgotha

Approximately 2000 years in the past, Jesus inspires a new way of faith. However, society deems him too dangerous and sentences him to crucifixion[2] on the hill of Golgotha.[1] 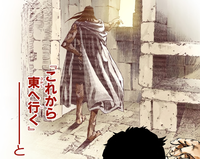 Joseph of Arimathea brings his corpse down from the cross, cleaning his body to prepare for burial[1] and wrapping it in a linen cloth. Despite being medically impossible and having fatal wounds, Jesus arises three days after his execution and revives. Jesus thanks Joseph for treating his body with care and then states that he will travel to the east. When Joseph asks him about a future meeting, Jesus makes a map in the sand, showing Joseph nine locations.

Jesus then travels east across the continent, learning new languages and cultures, until he reaches the sea. Making a ship with the locals' help, he crosses the sea, arriving in a new land where he lives, ages, and eventually dies. Having formed a connection with the natives, they state that they "wish to see him again" prior to his death.

Shortly after his death, a great earthquake tears the ground apart, and a great storm rages, dividing his corpse into nine pieces. His corpse never rotted, but the nine pieces travel further eastward due to the wind's movement, sand, animals, and natural events. They eventually end up in the nine locations on Joseph of Arimathea's map, spanning North America. A phenomenon named as the Devil's Palm emerged around each corpse part, granting a Stand to anyone making contact.

In San Diego, a group of soldiers perishes during their training in a desert, but one of them survives and makes it back to civilization alive due to accidentally finding Jesus's heart, hidden beneath the sand. The young soldier eventually becomes president of the country. Believing it to be fate, he is motivated to find the rest of the body parts.[2] 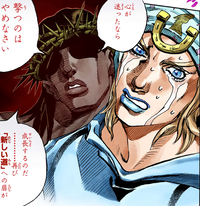 Initially, many believe that the Corpse Parts belongs to another saint. However, a few characters such as Blackmore have their suspicions that it is actually Jesus's.[6] For varied personal reasons, several characters in the SBR race seek to collect his Corpse Parts.

Blackmore is the first to perceive the presence of Jesus. Awed by this revelation, he lowers his guard to be fatally shot by Lucy Steel.[6]

During his fight with Axl RO, Johnny receives advice from Jesus, helping him overcome the Stand Civil War; after which Funny Valentine steals all the Corpse Parts from Johnny and Gyro.[4]

Later, fleeing from Valentine, Lucy happens upon the stolen Parts and somehow becomes pregnant despite being a virgin, discovering the corpse's head in her womb and later developing a Stand.[5][8]

His corpse is eventually sealed in a vault below Trinity Church in New York City. The only ones aware of its existence and its location are Johnny, Lucy, Steven Steel, and a few others in the American government.[7][9]

Anguished by the terminal illness of his wife, Rina Higashikata, Johnny decides to retrieve the corpse from its vault and try to use its power to heal her. Johnny buries the corpse under the sacred Meditation Pine in Morioh, Japan.[7]

Lucy arrives to retrieve the corpse, using a briefcase with the logo of the Speedwagon Oil Company to collect it. She notes that the ground of its burial site is similar to a Devil's Palm.[10]

In the light novel JORGE JOESTAR, the Corpse Parts actually belong to Jonathan Joestar. Due to Dio Brando's Space Ripper Stingy Eyes penetrating through Jonathan's hands during their battle on a ship, the corpse had holes in its hands. After stealing Jonathan's body, Dio impales Jonathan's feet onto a stick of wood embedded on the side of his coffin, allowing him to follow Erina Joestar who was sailing away atop the coffin.[11] 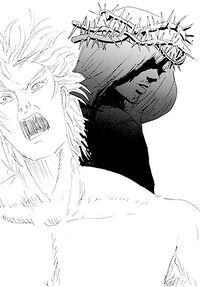 Dio, George Joestar II, and Jorge Joestar, all share a power known as Beyond (also called Trinity), implied to be God. Jorge sees Dio's Beyond behind him, appearing in the form of Jesus. He has long hair and his face hidden by a shadow unaffected by the direction of the sun. He is half-naked with a thin body covered in wounds and wears a crown of thorns on his head. Jorge says that Dio's Beyond actually looks a lot like Dio, with sad and kind eyes. Jesus states that Dio can either keep going, call off his attack, do anything he likes, or do nothing at all. Jorge hears the voice but assumes that Dio didn't hear it since he just kept screaming. For George and Jorge, their Beyond appears as Tsukumojuku Kato, who guides them to where they need to be.

Later, Dio's body separates into nine parts from his battle with Kars and then travels through universes with the power of Made in Heaven Ultimate Requiem. Due to the holes on the corpse's hands and feet, Funny Valentine assumes the wounds were due to crucifixion, believing that it must have been a holy man. Dio's head then travels to the vault under Trinity Church in the second universe to retrieve his body back. Jorge derails Dio's plans by placing Jonathan's head on top of the Corpse Parts, miraculously reviving Jonathan due to the power of his Beyond. Knowing that the conflict is over now, Jesus smiles and fades away.[12]