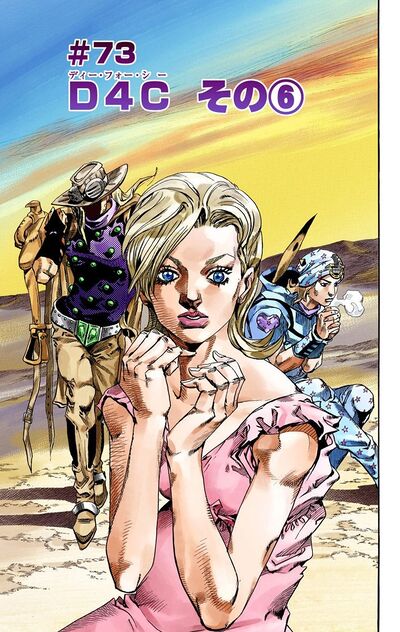 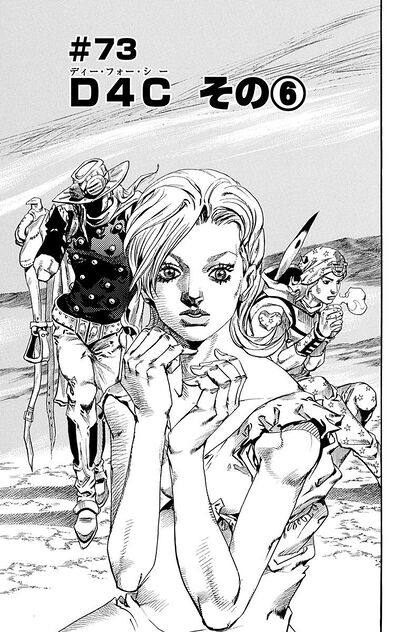 Lucy is forced by Funny Valentine to board his steamboat, also bringing Steven along with them. The boat then departs for an unknown destination. While trying to leave a message behind, she is interrupted by Valentine who throws it into the water; but the message ends up out of the water thanks to another series of coincidences. Diego, having followed Valentine's scent up to the river, has lost its trail.

He is ambushed by Hot Pants, who blocks his respiratory orifices with Cream Starter, but Diego retaliates by "kissing" her, fusing the flesh and also choking her. Hot Pants eventually proposes a truce, promising Diego that she can find his biological father. Diego, eager for revenge, accepts the proposition. His dinosaurs then follow Lucy's scent up to her message, pointing them to Valentine's location.

Gyro and Johnny see them riding together from afar, and figuring that they know where Valentine is, decide to follow them. Hot Pants and Diego finally arrive at a train yard, and upon seeing Valentine aboard a train, pursue it. However, Valentine throws out of the train alternate versions of Diego and Hot Pants to slow them down.

Author's Note
“
I wanted to buy something I wouldn't forget, so I purchased an 80,000 yen umbrella. The idea was a little too optimistic. I lost it.
”
—Hirohiko Araki
“
忘れ物しないようにと8万円もする傘買ったが、甘い考えだった。失くした。
”
—Hirohiko Araki