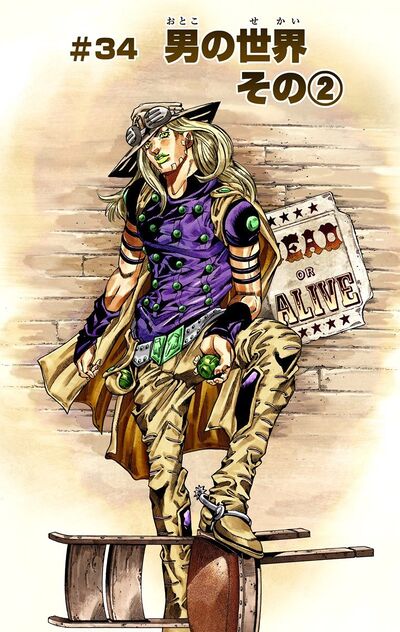 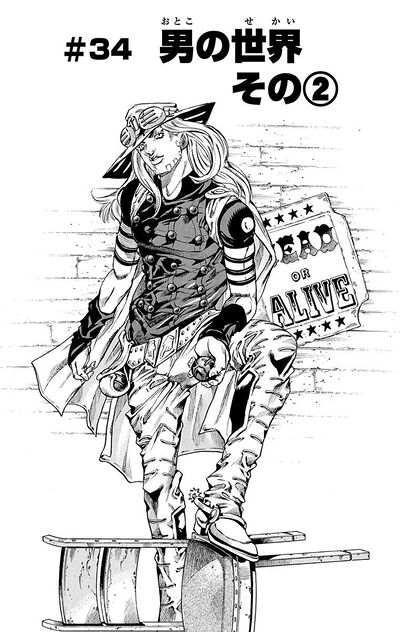 Several hours later, Johnny, Gyro and Hot Pants haven't managed to get out of the forest despite marking their paths, with Johnny noticing that the mark that he left on a single tree appeared on different trees. Hot Pants deduces that this may be a Stand attack from the man in the house earlier. Not wanting to lose a whole day to Diego, Johnny and Gyro accept Hot Pants' plan to kill the gunslinger with three against one.

With his plan to ambush the gunslinger, Hot Pants preemptively throws his Cream Starter to the roof of the house. As he stays behind, Johnny and Gyro confront the man who has just finished to bury Gaucho. Gyro interrogates him but the gunslinger derides Gyro, saying that a "conformist" like him has no chance to win in a duel. Gyro suddenly throws a ball toward him, but it doesn't reach him and strangely only stayed in his hand.

The man then properly introduces himself: his name is Ringo Roadagain and he uses the Stand, Mandom, which rewinds time by exactly six seconds, as long as he can turn the clock of his wristwatch. As it preserves the memory of the events, Ringo exploited the group's unfamiliarity with the landscape to make them wander aimlessly in the forest, and that they will have no chance to get out of it as long as he stays alive. Hot Pants ambushes Ringo, but the gunslinger manages to rewind time, evading the attack, and shoots Hot Pants' hand. Johnny immediately retaliates, with dark determination in his eyes, shooting his nails toward Ringo but he receives a bullet to the head, seemingly killing him. Hot Pants attempts to incapacitate Ringo once more before getting shot in the stomach.

Gyro loses his calm and throws a Steel Ball toward Ringo, but narrowly misses and is also shot in the stomach. His wounds are not lethal, and Ringo, taking the corpse of Johnny inside the house to retrieve the Left Arm, spares him out of contempt. The chapter ends with Gyro realizing that Johnny was narrowly out of the killing range of Ringo's Colt gun and may be alive. A dark determination is visible in his eyes.