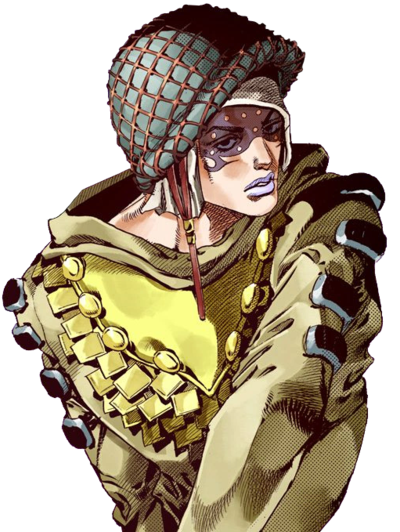 Purify himself of his sins[1]

An agent to President Valentine, Axl RO attacks Hot Pants, Gyro and Johnny with his Stand in Gettysburg, Pennsylvania, summoning corporeal representations of figures from their pasts in order to steal the Saint's Corpse parts. He is a Stand User, powering his Civil War with guilt.

Axl appears to be a middle-aged man of average to above-average height and medium build. Darkness (either shadow, paint or a tattoo) covers his face to just below his eyes and in mirrored, hook-like tribal marks on his cheeks; save for a scattering of dots.

Over a light, drooping rag, he wears a thick, round military helmet covered by a net. He wears a thick wide-necked top, bearing four dark rectangular patches between his shoulders and elbows on his long sleeves. His chest is overlaid with a V-shaped piece from which hang layers of squares; and he wears dark, knee-high boots.

Haunted by the sins of letting his comrades get killed, Axl RO seeks purification

Axl's most characteristic trait is his desire to purify himself from his sins in order to rid himself of the ghosts of his past comrades haunting him.

When he was young, Axl aspired to become a musician like Antonín Dvořák but was enlisted to the army instead.[3] After not being able to bear the terrors of war, he became addicted to alcohol. Axl prioritizes his own life above others. During the war, he had the opportunity to sacrifice his life to alert his companions of an incoming enemy troop, but chose to stay hidden and drink instead, letting the people of the nearby town be massacred. With his Stand ability, he is able to abandon his sin and guilt by transferring it to somebody else. This is tied to his ideology that claims people have to sacrifice something in order to progress.[4]

Axl believes that battles should be fair as stated when he told Gyro his Stand's weakness.[5]

Most of the time Axl is shown to be composed, which was the case even back when he willingly sacrificed people for his own sake. He does however lose temper and panic when Johnny damages the Corpse, shouting and desperately trying to stab him.[6]

Axl's Stand is Civil War, constituting a system in which is he able to transfer or unload sin and guilt via the attacks of hostile, ghostly representations of people and objects he or his targets harbor as having wronged or unfairly discarded. Another part of Civil War's ability is that whenever he's killed and his killer feels even the slightest of guilt for killing him, he is brought back to life. 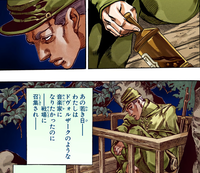 A younger Axl as a soldier

During his youth, Axl RO wanted to be a musician but was drafted into the army in 1863, where he was stationed in a tree to be a lookout in a remote town. Having no one to talk to, and being completely alone, Axl resorted to alcohol to relieve his despair. His job had been to light the lamp in order to warn the soldiers nearby of an incoming enemy troop. However, he did not do so in fear that the enemy would find him in the tree and would have killed him. So, he silently sat there and finished his drink as the town was burned to ashes. The people of the town and the soldiers were massacred, and that marked the beginning of continued losses for Axl's side in the war.

Ever since Axl has always been looking for ways to repent his sins, and when he obtained his Stand, he was hired by Funny Valentine to kill Johnny and Gyro. 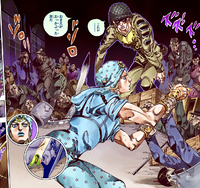 Axl RO is dispatched in Gettysburg. Installing himself in a building in the city, Axl lures Hot Pants in. Because of her great guilt, she is neutralized and Axl RO takes her Corpse Parts. Johnny Joestar and Gyro Zeppeli soon follow.

Meanwhile, Johnny interrogates Hot Pants but instead is warned of an enemy ability as she gets covered in a strange film. He cannot throw away things and must purify himself with water. Suddenly, a knife Johnny had left at the camp reappears and merges with his body. Warned, Johnny tries to go outside to his water canteen, but is pursued by Danny, his old pet mouse, and the damning visions of Nicholas. Johnny manages to douse himself in water. The mouse then comes out of Johnny's body and escapes the water. Seeing a well nearby, Johnny shoots the ground and manages to find more water. Johnny then crawls back inside the garbage dump, where he too starts to see random objects he's discarded over the years. He's attacked by Danny and his father George Joestar. But, Gyro has been listening to the ground and tells Johnny the location of Axl RO. Johnny shoots Axl in the throat, which kills him.

Axl is shot in the throat

However, this is what Axl RO was waiting for. The power of Civil War brings Axl back and transfers the specters of Axl's own victims to Johnny and Axl is happy to let Johnny bear the burden of his sins. Swarmed by specters that tear him apart, Johnny sees Jesus again telling him not to shoot if his heart is wavering, and Johnny takes the hint. He shoots himself and unlocks Tusk ACT3. With his newfound ability, he can move his hand into unusual places, allowing him to shoot from unexpected angles too. Taken by surprise, Axl hides in the mob and is still hit by Johnny's attacks. Nonetheless, Johnny cannot harm Axl in the building. The ghosts take Johnny's part of the Spine, and Axl is able to assemble the Saint's Corpse minus the Skull and leaves the dump, leaving Johnny at the mercy of the ghosts. Using Tusk ACT3, Johnny manages to catch up and with his hand, drags the Corpse towards the hole. Axl is shocked because the hole destroys everything save Johnny and it could endanger the Corpse. Axl desperately stabs Johnny in the throat, killing him. Thus, all of Johnny' sins are transferred to him. Axl Ro is cornered. However, someone then shoots Axl from outside. It is Funny Valentine, who has come to collect the pieces of the Saint's Corpse, and leaves. Axl then bleeds to death from his injuries. Because Valentine felt no remorse of killing Axl, Axl did not get revived and therefore died for good.

Axl RO appears as a support character in the form of his Stand Civil War, who speaks one voice line performed by Taku Yashiro. He says, "'People must abandon something in order to move forward.' Or would you rather 'pick up something and return?'" (「人は何カヲ捨テテ前へ進ム」ソレトモ「拾ッテ帰ルカ」？, "Hito wa nani kawo sutete mae e Suzumu" soretomo "Hirotte kae Ruka?"). When used during battle, it prevents the enemy team from acquiring items or using stage objects.