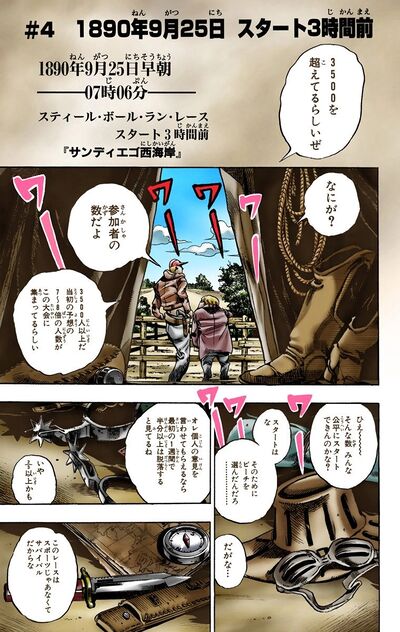 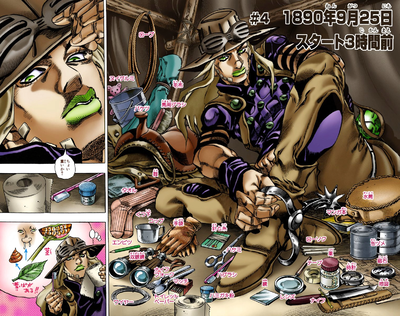 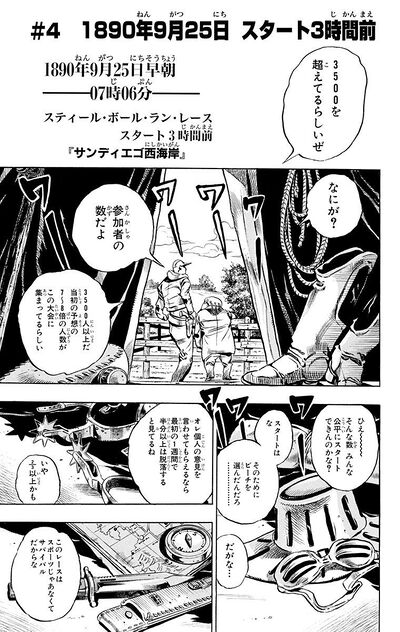 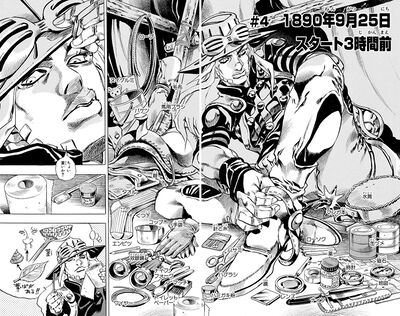 The chapter opens with two racers discussing about the number of participants, having more than seven to eight times more than expected. Because of the Steel Ball Run race's routes, the racers predict that only the winning candidates equipped with horses that were bred for stamina can reach New York.

Gyro overhears the conversation between the racers, who say that Johnny has been up all night trying to get on the horse. They say that he was sold a dobbin, an old horse, and was injured the night before when a piece of wood went through his right leg. They add that he has been threatening to commit suicide if anyone tries to stop him from getting on the horse, and that he must be insane. The racers notice that he could be trampled to death, and rush out to save Johnny. When they ask Gyro if he agrees with them, Gyro simply says that he'll never be able to ride his horse like that, but would be beyond human if he does.

On his way to town, Gyro is asked by Sandman where to sign up for the race, and points out the building to him. At the registration building, Sandman hands a wrapped cloth to the clerk as the clerk states that the fee is one thousand two hundred dollars in "white man's money." Sandman blows on the cloth, revealing an emerald that was given to him from his sister as a keepsake from their parents. He asks the clerk for a participation permit and tells him to keep the change. The clerk hands Sandman his permit and number, telling him that they need to take his horse's nose prints before the race starts. Sandman replies that he is not using a horse; he will cross the continent and win with his feet alone.

Thirty minutes before the race starts, Steven Steel shows the winning trophy, frozen in ice from the South Pole. He says that it is the "sacred ice" of the Steel Ball Run race, and that the burning desire of everyone involved in the race will melt it. After finishing his speech, Steven jokes about how his comments "broke the ice." His wife, Lucy, is the only one who claps.

As all the racers line up at the starting line, the two racers from earlier notice Johnny's horse walking towards it, still dragging Johnny behind. The horse licks Johnny as he begins to get up. Looking at Gyro, who has been watching, Johnny tells him that he plans to discover the truth about his Steel Balls; even if he cannot catch up to Gyro in the race, he will figure out the secret behind the Spin someday. Gyro replies, telling him that he chose his horse well, since older horses have more experience and are less likely to strain their legs in dangerous territory. He adds that he will give Johnny a hint: he has already found the answer; if he has the will to get on the horse, he should do so. Johnny stares at him, and the announcer says that two minutes remain until the race starts.

Johnny asks his horse to lick his face again, and as the horse bends its head down to lick him once more, its neck lifts Johnny up and onto its back. Johnny thinks to himself that all hope is in the Spin, and that he wants to know more about the Steel Balls. The race begins.

Author's Note
“
The most delicious food I had during my interview trip in the Southwestern United States was Burger King.
”
—Hirohiko Araki
“
アメリカ南西部取材旅行で一番おいしかった食べ物は「バーガー・キング」だな。
”
—Hirohiko Araki