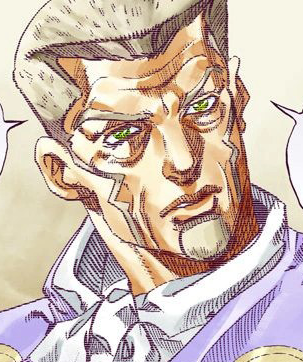 SBR Chapter 84
“
A heart full of sentimentality is dangerous... it can set your future to eternal misery...!
”
—Gregorio to his son Gyro Zeppeli, SBR Chapter 24: Interlude

Gregorio is Gyro's father and an executioner of the Kingdom of Naples.

Gregorio Zeppeli is a mature Italian man, his face being noticeably wrinkled with a constantly serious and severe look to him. His most distinctive feature is his facial hair, consisting of a soul patch covering the space from the lips to the chin, and two symmetrical zigzagging stripes of hair along the cheeks connecting to the hair. Although Gregorio Zeppeli keeps short hair cut into a flattop, he has a ponytail too. The design of the beard changed during his life.

Gregorio is shown in different outfits. The first time he was clothed in a dark jacket and pants. He also adorned the executioner outfit of his country, and was also featured having a typical surgeon's outfit.

Gregorio Zeppeli is a somber and serious man, whose loyalty lies in his king and his family.

Gregorio's life is centered around his responsibilities as patriarch of the Zeppeli Family, surgeon and executioner of the Kingdom of Naples, each of whom he takes extremely seriously and considers an honor to fulfill perfectly. Gregorio is loyal to his king, whom he considers a servant of God, and often thinks about how he and his son must best serve their country. Gregorio respects the letter of the law and considers that one must obey it, no matter the circumstance. Likewise, he doesn't like when one questions orders or even think about questioning it. Indeed, Gyro pictured his father scolding him for doing this and ordering him to return to Naples. Gregorio also considers that one must honor his ancestors.

Gregorio thinks that, to best serve as an executioner, he must sever himself from sentimentality, believing that it leads to potential spiritual weaknesses. As such he took extreme measures in order to avoid cultivating particularly emotive memories: apart from his family, Gregorio has practically no social ties, doesn't participate in social events and makes it a point to be very cold and severe with his son Gyro, not even celebrating his son's graduation from school. On the other hand, he has never raised his voice against his son either. Wanting to impart this philosophy, Gregorio often tells Gyro that the Zeppeli family was in the hands of the monarchy, and that it was not in the position of the monarch's subordinates to be sentimental. Likewise, Gregorio approaches his work coldly, and doesn't make a difference between criminals and the innocent, as long as they are sentenced to death.

Stating that true happiness lies in the family, Gregorio believes that protecting and honoring one's family is one's true obligation. He has taught his eldest son Gyro everything he knows, wishing to impart all of his family's traditions and honor his ancestors' work. He taught him everything about medicine, the Spin and how to become an executioner. He also imparted some of his mindset on his son, such as his belief in miracles.

However, Gregorio was shown to be benevolent at heart. For instance, he hid Wekapipo's sister in the countryside after Wekapipo was exiled to protect her. He was also keeping her blind so that her husband would stop thinking about her.

Spin: Gregorio is a master of the Spin, having taught everything he knows to Gyro. He mainly uses the Spin to ease execution by manipulating the muscles of the condemned, letting them relax before he decapitates them.

Surgery: Alongside the Spin, Gregorio is a surgeon by trade. He thus knows the human body extremely well, which translates into his expertise in execution and the Spin, and is said to be able to perform difficult surgeries such as reconnecting the optical nerves to the brain.

Gregorio was born to the prestigious and wealthy Zeppeli Family. It can be inferred that he inherited the Spin and his position as an executioner for the king from his father. Gregorio lived a life detached from sentimentality, not making any friends or foe by shunning social events and was absent to his son's graduation.

Gregorio trained his oldest son Gyro in the art of the Spin. As soon as Gyro was thirteen, Gregorio brought him to the royal prison to reveal him his grim occupation as executioner instructed Gyro in the use of Steel Balls training him to become a skilled executioner. When Oyecomova escaped prison and killed a guard with his explosives, Gregorio took responsibility and retired as an executioner. Gregorio was also involved in the exile of the royal guard Wekapipo, but also made sure his younger sister was safe from Wekapipo's enemies.

At the age of 24, near his 25th anniversary, one woman scheduled for execution became violent and almost killed an executioner. The woman slammed Gyro against the wall but Gyro neutralized her. During the struggle, Gyro lost his collar hanger; his father Gregorio also chastised him for his sentimentality, as he saw Gyro pensive looking at the woman and an old prisoner in a cell. Gyro then met Marco, a boy servant who was scheduled for execution. Disturbed by the false charges as well as the fact that Marco was his first execution, Gyro asked for Marco's appeal. The protestation made the news of the country and Gregorio disapproved of Gyro's behavior. Against his father's wishes, Gyro subscribed to the Steel Ball Run race to win it and obtain amnesty.

During the Steel Ball Run race, Gyro would often think back to his father's words. His influence to Gyro is evident in his decisions, particularly during Gyro's duel with Ringo Roadagain. Gyro imagines an illusion of his father ordering him to return to Naples immediately instead of using the Spin to save Johnny Joestar, as his sentimentality will become his vulnerability.[2]

After Gyro's death, a revolution occurs in the Kingdom of Naples and the Zeppeli family leaves Naples. The rest of their fate is unknown.