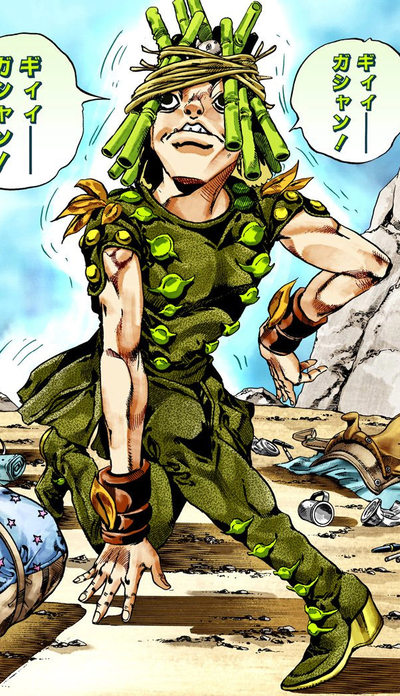 Pork Pie Hat Kid is one of Funny Valentine's henchmen and attacks Johnny Joestar and Gyro Zeppeli in the desert to take their Saint Corpse Parts. He also happens to be a Stand User wielding the double hooked Wired.

Pork Pie Hat Kid appears like a skinny and short young boy, hiding his bald head with bamboo sticks. Unlike most characters, he is unattractive, having a large and angular jawline and baring his teeth constantly. In contrast to the usual character design, Pork Pie Hat Kid possesses large black irises.

Pork Pie Hat Kid wears a sleeveless suit, open and laced at the back and decorated with studs arranged vertically on both sides of the chest and both legs, as well as short feathers on the shoulder and finally a tutu-like short dress. He also wears large bracelets adorned with leaves on both wrists.

Because of his Stand Wired, Pork Pie Hat Kid's tongue has two hook shaped cavities and the bottom of his mouth two wheels around of which the cables of Wired can roll.

The series is known for alternating colors between media, the information presented below may or may not be canon.
Skin(Fair)
Outfit
(Dark green suit with light green and yellow accessories, orange leaves, orange-brown cuffs) 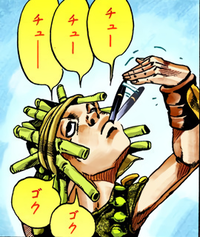 Pork Pie Hat Kid appears to be a goofy and deranged individual. He seems to have little conception of normalcy and shows several disturbing habits. For instance, he has a tendency to eat and drink anything that comes into his view such as the ink of a pen (finding it delicious) or a whole coffee pot, and even wonders if he could eat his broken teeth. He is also shown hitting a bag with a rock to search it instead of opening it. Like any of Valentine's subordinates, he has little problem with using violence and killing his targets.

His motivation of searching for the Corpse Parts is to get a promotion and be acknowledged as being "invincible and smart", hinting that he is aware that people look down on him and is uncomfortable with it.

Despite his quirks, Pork Pie Hat Kid is still shown to be a capable tactician in a Stand fight. Aware of his primary objective of securing the Corpse Parts, he takes the time to analyze the situation and is shown to devise several plans to counter the enemy actions, at one point using Gyro as a bait after having predicted that Johnny would come to save his companion or release Slow Dancer near Johnny to weaponize the horse' instinctual will to go to its rider and then detect the hidden Johnny.

Pork Pie Hat Kid possesses a Stand ability named Wired consisting of two hooks coming out of his mouth, which he can freely control and make appears out of the bottom of miscellaneous objects, allowing him to attack his targets from afar.

In the plains just before Monument Valley, Pork Pie Hat Kid sets up his trap. He sets camp on a rocky mound and installs his Stand to hook his targets through the falling feathers of nearby vultures. 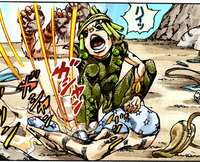 Searching for the Corpse in Johnny's stuff

Since it is suspected that Gyro has the Corpse Part, Pork Pie Hat Kid targets him first. He hooks Gyro and then his horse right under Johnny's nose. Gyro is hung on a rock nearby by the hair. He finds a broken pen and drinks its ink. However, Pork Pie Hat Kid doesn't find the Corpse Part and thus attacks Johnny. He takes Johnny's horse from under him then tries to hook Johnny. However, Johnny escapes by cutting his cheek. Johnny also sees the method of Wired's attack and manages to hide under a rock.

Pork Pie Hat Kid changes from feathers to beetles, and Johnny knocks a beetle over, allowing Wired's hook to pass through and hook Johnny up close. However, Tusk appears and activates Johnny's toenails. The nails pass through the beetles and almost hit Pork Pie Hat Kid, who's forced to bend backward to avoid the attack and stops his own. When he looks in the bowl again, Johnny has camouflaged himself. He also realizes that Gyro has thrown a Steel Ball in the bowl to give his location. Frustrated, he knocks Gyro with his hooks but Pork Pie Hat Kid is ready for Johnny. As Johnny approaches, Pork Pie Hat Kid scans the land. Frustrated, he sends Slow Dancer back to Johnny so that the horse and sense its owner and go in his general location. Pork Pie Hat Kid then sends oil and a match, setting the ground on fire. He seemingly fires Johnny and tears him apart but Johnny has sculpted a decoy with his nails, Pork Pie Hat Kid is open and Johnny shoots him through the feather. 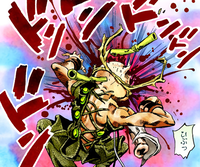 According to the President's men, Pork Pie Hat Kid did not die. However, due to his confrontation with Johnny and Gyro, he will remain disabled for the rest of his life.[1]