The Terrorist from a Faraway Country, Part 2 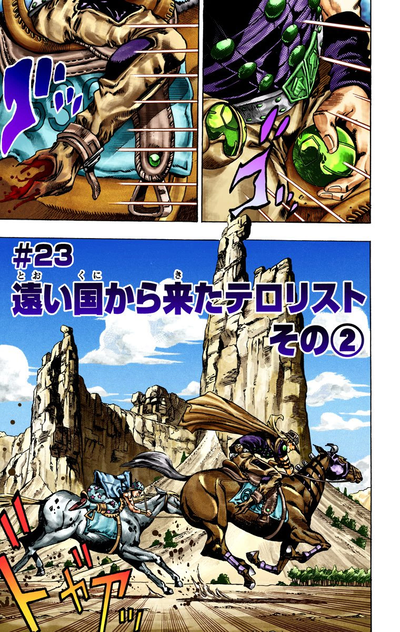 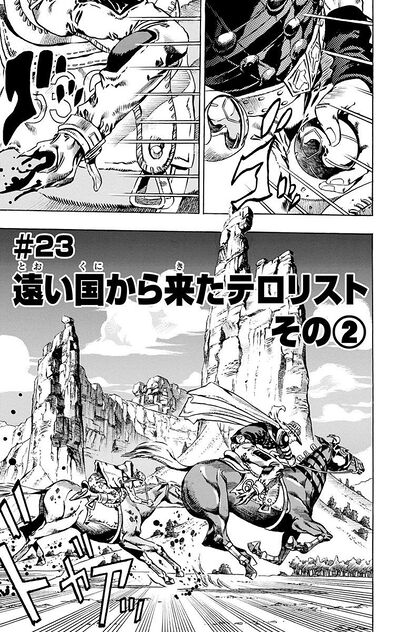 The Terrorist from a Faraway Country, Part 2 (遠い国から来たテロリスト その②, Tōi Kuni kara Kita Terorisuto Sono 2), originally Chase in the Mountains (山岳地帯の追撃, Sangaku Chitai no Tsuigeki) in the WSJ release, is the twenty-third chapter of Steel Ball Run and the seven hundred seventy-fifth chapter of the JoJo's Bizarre Adventure manga.

It is also the final chapter of the series to be published on Weekly Shonen Jump. From "Interlude" onwards, chapters are published in Ultra Jump.

Johnny and Gyro pursue Oyecomova to the Zombie Horse's location. As Gyro deduces that the bombs have a time delay for Oyecomova's safety, Oyecomova concludes from the earlier attack that the Steel Balls have a maximum lethal range of 30 meters at most and that he has to maintain the distance between them. Using his Stand Boku no Rhythm wo Kiitekure, Oyecomova plants bombs into the stream of the waterway they are in, forcing Gyro and Johnny to outpace the explosions.

Oyecomova throws a nest full of mined bees toward the duo, but Gyro uses the Steel Ball to catch a nearby spider net and get them away as they explode. Gyro's mouth explodes and he realizes that Oyecomova is using mined smoke from a cigarette. In the smoke, Oyecomova distinguishes the spider net and hears a buzzing sound. Figuring that Gyro threw the mined bees at him, Oyecomova pulls the nets to cut it, but the buzzing is revealed to come from Johnny's spinning nails he stuck to the net. Acting as launching platforms, they considerably increase the lethal range of the Steel Balls; Gyro throws his balls at Oyecomova's face, defeating him.