A summary of Johnny Joestar's history and movesets in video games. 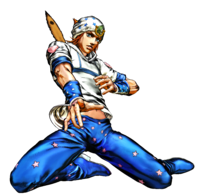 Johnny makes his first playable appearance in the PS3 game. He was confirmed alongside Jonathan Joestar and Will Anthonio Zeppeli. As a Part 7 character, three parts of the Holy Corpse appear scattered on stages when he, Gyro, or Valentine are used, which they can pick up to receive blessings that boost their performance in combat.

Along with Gyro, Johnny is one of the only two characters in the game who uses the "Mounted" Style. This Style allows him to get on and off his horse, Slow Dancer, slightly changing the moves available to him. Johnny must be unmounted in order to pick up the Corpse Parts but is slowed to a sluggish crawl due to his paraplegia. Exclusive to Johnny is a "Tusk's Growth" icon that appears above the Heart Heat Gauge, which displays Tusk's current ACT. Johnny has 950 HP.

Along with Enrico Pucci, Kosaku-Kira, Hol Horse, Koichi Hirose and Giorno Giovanna, Johnny is a character who can utilize more than one Stand during a match as part of his move set, being the character with the most Stands, all four Tusk ACTs.

ON GROUND
Johnny can mount or unmount his horse Slow Dancer, changing the way he plays.
Holy Corpse Blessing
Passive
Johnny receives a new blessing every time he picks up one of the three Holy Corpse Parts, but if knocked down, loses it as he drops the part.
I have to get there!

ON GROUND
This skill can only be used when unmounted. Johnny spins his nails and forces his lower body into the air, temporarily 'wheeling' himself forward or backwards. If used with the opponent at point-blank range, they will take small damage.
I can make it!

This skill can only be used when mounted. Slow Dancer lunges forward, and if the opponent is hit, rams them into the air. (Comboable through Puttsun Cancel)
Throw
My body... it stood!
2 ATK buttons at close range or

ON GROUND
The Throw can only be used when unmounted. Spinning his nails without firing them to use in melee attacks, Johnny attacks the opponent's lower body with his nails, before he spontaneously leaps into the air and fires them.

Johnny begins a match with ACT1. Most of his moves consists of him shooting his nails as projectiles. All moves related to ACT1 are lost upon Tusk evolving.

ON GROUND
Johnny shoots his nails like bullets. Depending on the attack button inputted, he will shoot three-to-five at a time. It can be done on horseback or on the ground (Comboable through Puttsun Cancel)
My nails are spinning!

ON GROUND
Johnny spins his nails as he swings upward in a melee attack, knocking the opponent off their feet. This move doubles as an anti-air. (Comboable through Puttsun Cancel)
What is this?!

ON GROUND
This move can only be used when unmounted. Johnny sends a narrow shockwave forward along the ground, knocking the opponent down on impact. This move is a low attack and cannot be blocked if the opponent is not crouching. (Comboable through Puttsun Cancel)
HHA: Even if my spin falters, I'll never die!

+ 2 ATK Buttons ON GROUND
Johnny's HHA with ACT1 is "Even if my spin falters, I'll never die!". Imbuing the Golden Spin into a nail bullet, Johnny evolves Tusk into ACT2, before shooting said nail into the ground. The hole generated by the nail bullet moves along the ground, homing towards the opponent and knocking them into the air if it connects. The HHA is a low attack and cannot be blocked if the opponent is not crouching. It is possible for Stand Users to be hit by this HHA twice, taking double damage, but the Stand must be hit first in order for this to occur.

Once Johnny reaches ACT2, a Tusk Icon will appear above the Heart Heat Gauge, showing the amount of Golden Spin nail bullets he has left from 10. One of the nail icons will darken every time Johnny fires one off, and they will only regenerate after all ten have been used up.

ON GROUND
Johnny drinks chamomile tea, temporarily boosting the speed at which his nails grow back.
Golden Spin Nail Bullets

ON GROUND
Johnny shoots a single nail bullet infused with the Golden Spin, hitting the opponent for more damage than his previous "I'll call them Tusks!". Depending on the attack button inputted, he will shoot at a different angle; If Heavy, Johnny fires upward, and the attack doubles as an anti-air.
The hole will attack you

ON GROUND
Johnny fires into the ground, and the hole created by the nail bullet moves along it, homing towards the opponent and knocking them into the air if it connects. This move is a low attack and cannot be blocked if the opponent is not crouching. As the hole moves slower than the nail bullets, it is possible, given enough range, for both to hit the opponent at the same time. It is also possible for Stand Users to be hit by this move twice, taking double damage, but the Stand must be hit first in order for this to occur. (Comboable through Puttsun Cancel)
HHA: Now I know where to shoot!

+ 2 ATK Buttons ON GROUND
Johnny's HHA with ACT2 is "Now I know where to shoot!". The HHA can only be used when unmounted. Aiming a Golden Spin Nail Bullet at the side of his head, glaring eyes aflame with dark determination, Johnny evolves Tusk into ACT3 as he shoots himself. ACT3 then sends a large hole created by Johnny's nail bullet along the ground. If it hits the opponent, they will stagger on the hole as it moves behind them. Johnny's upper half will then appear out of it as he shoots the opponent five times.

Style/Specials/Etc (Tusk ACT3)
Send me down the hole!

ON GROUND
Johnny fires a nail bullet into the ground and sticks his forearm in. If mounted, a hole will be suspended in mid-air next to him. The hole will then move along the ground forwards or backwards, before his forearm appears from it and shoots the opponent with a stronger Golden Spin Nail Bullet, knocking them off their feet if it hits. This move uses up two Golden Spin Nail Bullets per use; One to create the hole, and a second to fire in the actual attack. The attack will not complete if Johnny has no more than a single nail left.
Where's the upper half?!

ON GROUND
This move can only be used when unmounted. Johnny fires a nail bullet into the ground and sticks his entire upper body into it. Another hole will then move along the ground forwards or backwards before the rest of Johnny's body is sucked in. Johnny will then reappear on the other side. The longer the button is held, the farther the hole and by extension, Johnny, will travel. This move is useful for quick movement along the stage unmounted or simply for evasion, but has a delay in order for the hole to move, leaving Johnny's lower half open to low attacks.
HHA: Complete Golden Spin Energy

+ 2 ATK Buttons ON GROUND
Johnny's HHA with ACT3 is "Complete Golden Spin Energy". The HHA can only be used when mounted. Johnny evolves Tusk into ACT4 as the new Stand advances forward while rapidly punching. The whole HHA does not have to hit in order for it to work; If the opponent is so much as hit by the last punch, they will be knocked to the ground as Tusk ACT4 follows up by pummeling them as they lay. This HHA will remain after Tusk evolves to ACT4, being the final and strongest HHA.

Once Johnny reaches ACT4, he unlocks two more abilities that involve Tusk ACT4 directly attacking the opponent with a barrage of fists.

ON GROUND
Johnny fires a nail bullet imbued with ACT4 as it rapidly punches flying forward, pushing the opponent away and knocking them down with the final punch if it lands. (Comboable through Puttsun Cancel)
Chumimin~

ON GROUND
Johnny fires a nail bullet imbued with ACT4 into the ground. ACT4 will immediately reappear in front of the opponent and rapidly punch them, regardless of range or orientation. (Comboable through Puttsun Cancel)
GHA: "Pretty long for a shortcut!"

ON GROUND
Johnny's GHA, "Pretty long for a shortcut!", will instantly evolve Tusk to ACT4 from any other ACT. The GHA can only be performed while mounted, but will automatically summon Slow Dancer when used unmounted. Johnny jumps off of Slow Dancer and fires a singular powerful nail bullet imbued with the power of the Complete Golden Spin Energy as ACT4 appears. If it lands, the nail bullet will drill into the opponent's torso, before ACT4 flies at and rapidly pummels them. ACT4 finishes by spinning and funneling itself into the hole created by the nail bullet. As its head appears from behind the opponent, the entrance of the Stand into their bodies generates a massive pink burst. Johnny calmly and quietly thanks Gyro throughout this process. If Valentine is falls victim to the GHA, a unique special scene plays where Valentine attempts to protect himself with D4C Love Train, only for Tusk ACT4 to forcefully rip the wall open and fly through, recreating the climactic scene from the battle in the manga. When beating Valentine, a slow-motion close-up of Tusk punching D4C in the face and the hit reflecting in Valentine is shown.

If Johnny is hit with "Kosaku Kawajiri's" Bites the Dust GHA while Tusk is at ACT2 or beyond, it will revert back to ACT1.

Usually when falling victim to certain GHA moves or other finishers, Johnny is still kneeling/crawling. However, when struck by Part 4 Josuke's GHA, Johnny is briefly seen standing (Either a result of a different animation for Johnny having not been programmed or Crazy Diamond actually healing his spine and legs) before Josuke pummels him back to his old disabled self.

Aside from Gyro and Valentine, Johnny has special dialogue with himself, as both Johnny's believe the other is a parallel version of himself made by Valentine. 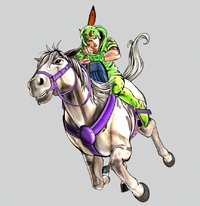 Johnny was confirmed for the game alongside Gyro, Valentine, and THE WORLD Diego. Unlike in All Star Battle, Johnny now begins battle with all of Tusk's ACTs immediately available, no longer needing to evolve his Stand in order to use his full capabilities.

As a Mounted Fighter, Johnny is able to switch between riding atop Slow Dancer or crawling on the ground, each state with its own unique abilities. Also, as a Stand User, Johnny is one of many characters with wildly varied abilities that grant him uniqueness in battle.

He is paired with Josuke Higashikata in the Eyes of Heaven Tournament, but was eliminated in the preliminaries by Old Joseph Joestar and Yoshikage Kira.

Johnny appears in the Steel Ball Run themed stage, along with Gyro Zeppeli and Diego Brando, where Diego can be seen ahead both of them (likely a reference to the end of the competition's third stage). 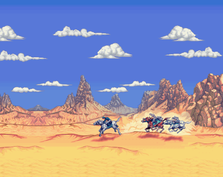 Johnny appears as a support character. His help Koma provides immunity from the Speed Down status effect. He and Gyro are the only Part 7 representatives in the game as Part 7 was still ongoing at the time. Due to the game's release date coinciding with the release of SBR's first volume, Gyro appears as an actual Koma support (characters that appear on the screen to perform an action and disappear) whilst Johnny is merely a help Koma, due to Gyro being the original protagonist of Part 7.