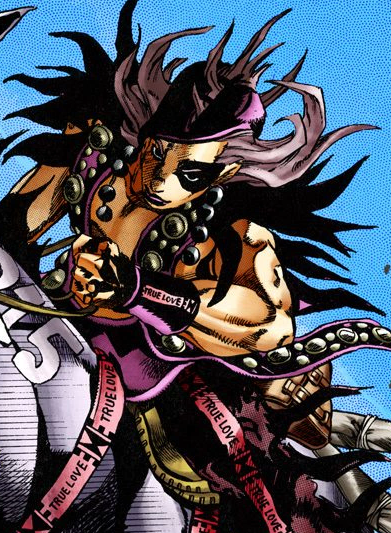 SBR Chapter 14
“
In order to separate myself from others, I used a special technique on my body. To make myself unstoppable, I started to raise insects within myself... These 'insects' have completely surrounded all of you!
”
—Mrs. Robinson, SBR Chapter 14

Mrs. Robinson is a racer in the Steel Ball Run who attacks Johnny Joestar and Gyro Zeppeli in the desert to get rid of competitors.

Mrs. Robinson is a well-built yet heavily androgynous Mexican man who has long flowing hair and prominently wears a string of eyeballs.

Parts of his body are hollowed out in order to breed insects inside, notably his left eye socket.

The series is known for alternating colors between media, the information presented below may or may not be canon.
Skin(Tan)
Hair(Grayish-lavender)
Eyes(Brown)
Outfit
(Purple hat, vest, and arm warmers with gold beads, pink "TRUE LOVE" tags, velvet pants and boots with pink soles.) 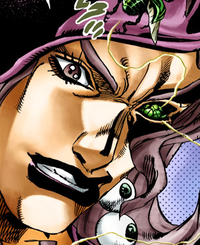 Robinson is a sinister character raising insects in his eye socket

Mrs. Robinson is an unscrupulous competitor in the Steel Ball Run.

Influenced by his village's tradition, where a dispute can degenerate into a fight and the loser is tied into a cactus and left for dead, Mrs. Robinson is a cold-blooded and deranged killer. He has, in order to survive in his village, transformed his body into an insects' nest whom he commands to win his fights, and doesn't hesitate to try to murder competitors during the race. 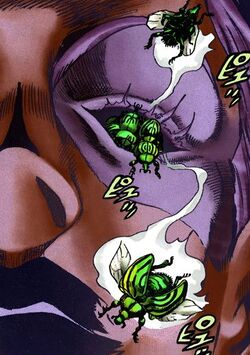 Mrs. Robinson keeps several flying insects in the hollowed-out parts of his body, including his left eye socket. He ejects them out whenever he attacks someone. The insects create high speed pressure while flying, causing cholla cacti that are nearby to freely shoot their needles.

Mrs. Robinson appears to be a competent horserider, having finished at the 18th place during the first stage of the Steel Ball Run race.

According to Mrs. Robinson, he had at some point lived in a small village in the desert, where a dispute could degenerate into a fight to the death, and the loser was tied to a cactus then left for dead. It was believed in this village that the cacti cursed the loser and enslaved them to the revenge they would never get.

In order to always win such fights, Mrs. Robinson heavily modified his body, transforming it into an insect's nest and using the insects to his advantage. 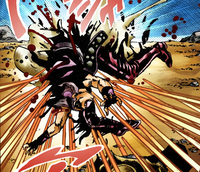 Mrs Robinson participates in the Steel Ball Run. In the first stage, he doesn't distinguish himself. At the start of the second stage, he is the first to follow Gyro Zeppeli and Johnny Joestar in the desert, aiming to assassinate them. Six hours into the second stage, Mrs. Robinson starts his attack and sends his flies trigger the chollas near Johnny and Gyro. They shoot their needles, piercing Gyro's ear and then attacking them from all sides. Still, Mrs. Robinson keeps his distance. He then makes it so a flurry of needles accurately cut Johnny's bridle and pierces his face, unhorsing him.

Gyro decides to confront Mrs. Robinson head-on. Gyro tries to throw his Steel Balls but needles hit his arm, making Gyro botch his throw and the Balls falls to the ground. Robinson reveals that he's breeding a swarm of flies inside of him to send them toward the chollas. However, Gyro also reveals that the vibrations of the Spin are still synched up to take out Robinson. The vibrations make some chollas explode near Robinson, who is shot down by a flurry of needles. Later, Mountain Tim sees Mrs Robinson lying on the ground but Robinson's ultimate fate is not revealed.