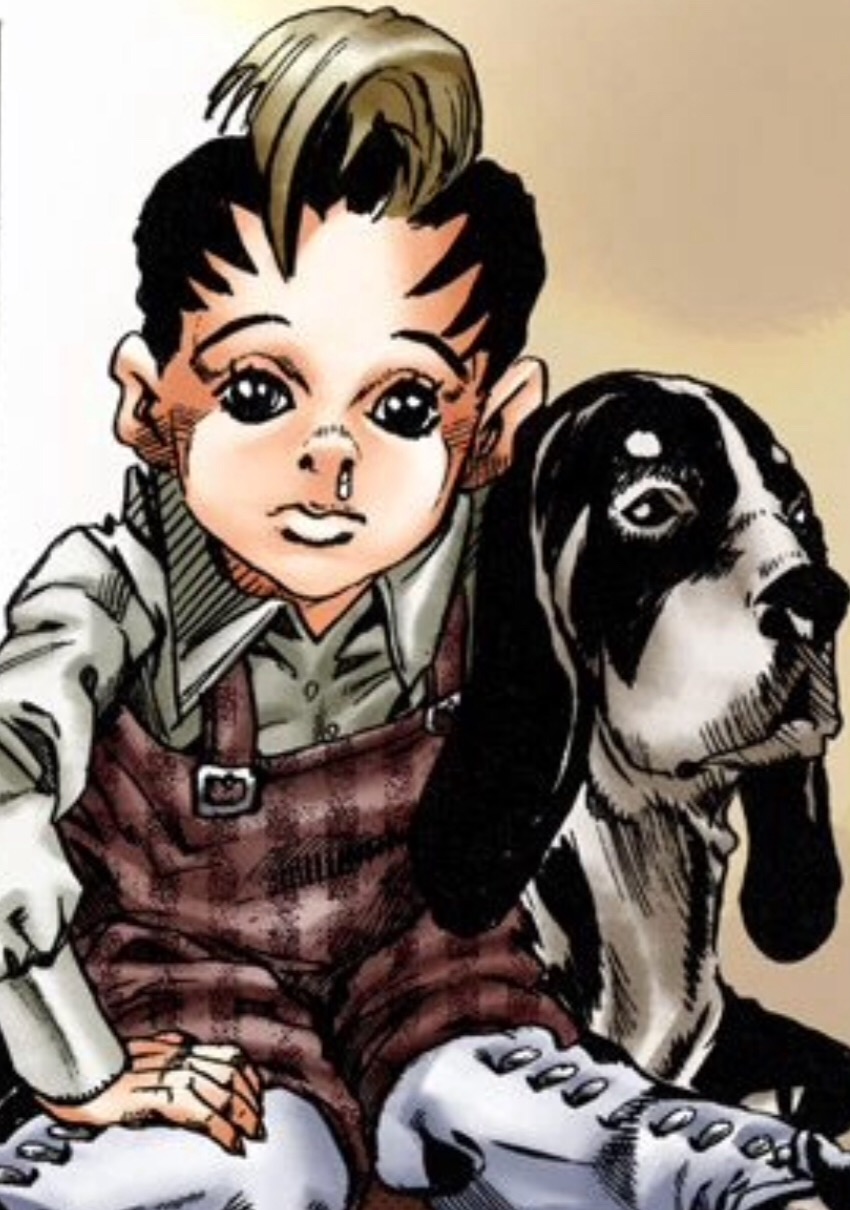 Marco is a young servant who was sentenced to death when his master was arrested for treason. His survival is a source of Gyro Zeppeli's determination during the Steel Ball Run.

Marco is a small 9-year-old boy with dark eyes and hair, save for a tall, light quiff in the front.

The series is known for alternating colors between media, the information presented below may or may not be canon.
Skin(Fair)
Hair(Black hair, blond quiff)
Eyes(Black)
Outfit
(Biege shirt under brown overalls and light blue pants.)

Raised as a servant, Marco is a naive, docile and well-meaning boy, conscientiously performing his tasks. When he was arrested, he seemed unaware of his death sentence and kept doing chores for the executioners, at one point taking a collar to sew it, thinking only to serve, and didn't understand their anger at the unwitting theft.

Marco is introduced as a young boy born into a long line of servants who served under Napoleonic aristocrats. At the age of 9, he had been ordered to serve under a baron called Rippi, where his sole job would be to clean his hats and shoes. Before setting out, Marco's father told him that "the job would bring him happiness as long as he stayed humble and earnest". Taking these words to heart, Marco would get up early every morning to shine shoes and brush hats for the baron and his guests.

When the baron was revealed to have been planning a revolt against the country's king, he and his family were put on trial and sentenced to execution. Evidence suggested the assassination had been planned within the estate, and police automatically assumed Marco had been part of it, which resulted in his arrest as well. He was sentenced to be executed via beheading.[3]

Later, while in prison, Marco would be confronted by the prison guards. He was found to have a needle with him under his bed, with the guards suspecting it to be a weapon. He claimed to have made it out of a fish's bone that he had managed to pick up from drain in order to re-sew Gyro Zeppeli's collar hanger, which had fallen near the cell earlier after a female prisoner had gone berserk. After finding out that he would be the one to execute the young boy, Gyro became perplexed by his father's words about sentimentality.

Marco was temporarily saved after Gyro fought against the court's decision. Afterward, Gyro vowed to travel to America to win the Steel Ball Run, and force the king to grant the boy amnesty and free him.

Though Gyro was unable to win the race, the people of Naples eventually revolted against the king several years later. Upon their success, the monarchy was abolished and the kingdom became a republic's dependent province. Marco, who had remained imprisoned, was granted amnesty and set free. However, as fate would have it, he would later die of a cold.