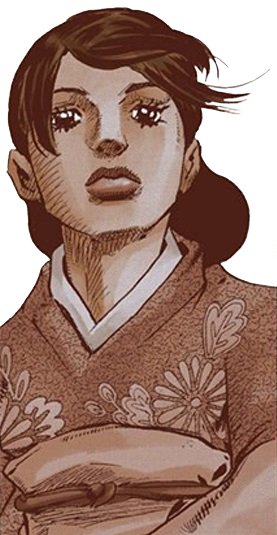 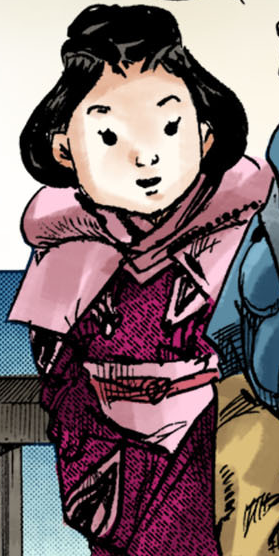 She is the daughter of Norisuke Higashikata I and wife of Johnny Joestar. Known as Rina Joestar (理那・ジョースター, Rina Jōsutā) after marriage,[3] she is the mother of George Joestar III and an unnamed daughter.

Rina is a young Japanese woman first seen in a yukata. She is depicted with doe-like eyes and, prior to meeting Johnny Joestar, wore a traditional Japanese hairstyle. Her hair is also shown tied into a ponytail. Later on, she begins wearing casual clothes in order to assimilate with the American life until Johnny's eventual death in Morioh.

The series is known for alternating colors between media, the information presented below may or may not be canon.
Skin(Fair)
Hair(Black)
Eyes(Black)
Outfit
(Velvet yukata with a pink obi and neckdress with a salmon obi-shime.)

Rina is described as a loving and faithful wife, as seen when she placed her utmost trust in her husband, Johnny, as she was suffering from the Rock Disease. She also remained unmarried after his death. Her maternal love is evident when she continued to care for her son, George III, as a single mother after Johnny's sacrifice to cure him of the same disease, and even years after with her grandson, Joseph Joestar.[4] 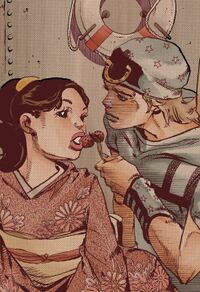 Rina with her husband Johnny Joestar
In the final chapter of Steel Ball Run, she meets Johnny Joestar on the ship crossing the Atlantic back to America with her father Norisuke. The two fell in love and eventually marry and live together on a ranch.

Years later, after the events of Steel Ball Run and before the events of JoJolion, Rina comes down with an incurable illness causing her to lose her memories and eventually turning her skin stiff and folded like origami. Johnny decides it is best to bring her to Japan to spend the last few days of her life in her hometown of Morioh.

He eventually travels back to New York to re-obtain the Saint's Corpse as a way of curing his wife's illness. After she is cured, the disease passes to their son George II. Johnny finally uses Tusk to take it upon himself, sacrificing himself for the sake for his family.

Afterwards, she is charged with Johnny's murder, but is released due to lack of evidence.

In 1924, her grandson would be born whom she named Joseph. She also lived with him in S City.[4]