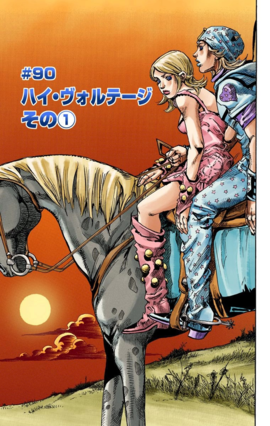 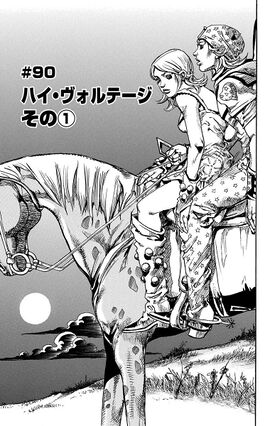 Some time later, Johnny, who has regained the use of his legs, envelops the Corpse on his horse. He, Lucy and Steven take some time to observes the last horseracers of the Steel Ball Run race and Johnny plans to go retrieve the corpse of Gyro to give it back to his family in Naples. However when Johnny turns his head, he sees that the Corpse has been stolen. Johnny is confused since Valentine should have been the last one to covet the Corpse and no one heard anyone approaching. Spotting familiar horseshoes prints, Johnny concludes that one of the participants has stolen the Corpse. Steven reveals that a vault in New York City has been built to shelter the Corpse and the enemy should be heading here. Thus Johnny pursues the prints, leaving Gyro's retrieval to Steven. The final Stage approaches: "Manhattan Rhapsody", 15 km through New York City.

A great crowd has amassed in New York in anticipation of the end of the Steel Ball Run. The speaker explains to it that the 8th stage which will finish in Union Beach will carry on immediately to the final stage. Each participant will be carried from Union Beach to Coney Island by a boat, from which they will have to reach Manhattan's Trinity Church through the Brooklyn Bridge. The crowd gets to witness Baba Yaga forfeit the race due to his injured horse.

Meanwhile Johnny is still pursuing the mysterious horseshoe prints which belong to neither Pocoloco nor Norisuke Higashikata. The mysterious thief is in view but still unrecognizable; he then turns around the corner of a building but Johnny sees that he's disappeared somehow, having gone through a wire fence. Johnny follows him nonetheless. Once he is in Tusk's range Johnny prepares to fire, but the horseracer suddenly disappears again and reappears behind him. At the same time, the Steel have tracked the horseshoe prints up to a hole in the ground, meaning that the thief has been brought from another universe. Johnny turns his head and to his surprise, sees Diego Brando alive, and wielding a new Stand: THE WORLD. Diego stops time and throws several knives toward Johnny.