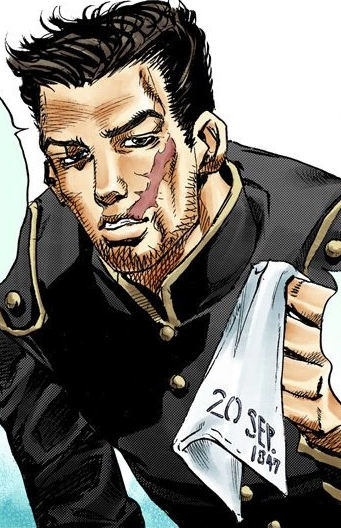 Captain of the army's cavalry[1]

SBR Chapter 87 (Flashback)
“
'Patriotism' is the most beautiful 'virtue' in this world. Even animals risk their lives for the sake of their children, but risking one's life for pride in their country and thinking of it as an extension of protecting one's family is only a 'nobility of humanity'... a kind of heart completely different from a religious fanatic.
”
—Captain Valentine, SBR Chapter 87: Ball Breaker, Part 5

He is a captain of the army's cavalry. When Funny Valentine was a child, Captain Valentine tells Funny about his biological father, and teaches Funny patriotism and how it is the most beautiful virtue in the world. He eventually becomes Funny's stepfather.

Captain Valentine has a large scar on his face, presumably from war. He has short dark hair and a stubble. He is seen in a dark uniform.

The series is known for alternating colors between media, the information presented below may or may not be canon.
Skin(Fair)
Hair(Black, with brown highlights)
Eyes(Gray)
Outfit(Black uniform with golden highlights.)

It can be inferred that like Funny, Captain Valentine is also patriotic, as he considers patriotism to be the most beautiful virtue in the world. He is friends with Funny's biological father, and is proud to have been, for he appreciates his devotion for his family. He seems to have some charismatic qualities, as he is a captain of the army's cavalry.

He became a captain of the army's cavalry and befriended Funny's biological father at some point. Later while he was visiting his friend's grave after his friend died, he finds the handkerchief his friend held. He decides to visit his friend's wife and son.

During his struggle against Johnny Joestar and Tusk ACT4, Funny Valentine recalls Captain Valentine's visit and story. He pulls out the handkerchief he's kept since the visit, to remind himself of that time, and to boost his resolve in defeating Johnny.