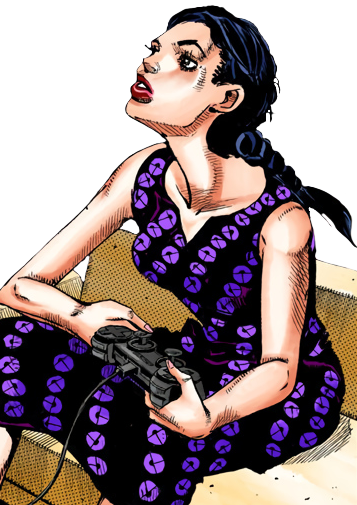 JJL Chapter 102 (Flashback)
“
Yasuho... Why are you talking like that...? At least play one game... That sarcastic tone makes you sound just like your father!
”
—Suzuyo Hirose, JJL Chapter 24: Paper Moon Deception, Part 2

Divorced, she is the single mother of Yasuho Hirose.

Suzuyo initially has long dark hair tied into several pigtails with spherical hair clips, just like her daughter. She wears a plain sleeveless U-neck dress, a belt with two roses attached to it, and high heels.

Later, she is seen with a braided ponytail and a dress embroidered with multiple circular patterns.

The series is known for alternating colors between media, the information presented below may or may not be canon.
Skin(Fair, red lipstick)
Hair(Black with blue highlights)
Eyes(Green eyes)
First Dress
(Blue dress, black belt with a golden buckle and pink flowers attached to the belt.)
Second Dress
(Black dress, with a light purple circular pattern and magenta highlights.)

Suzuyo is immature and carefree, which strains her relationship with her daughter. She enjoys a profligate lifestyle doing things such as playing video games and drinking alcohol often. On one occasion, Yasuho discovers Suzuyo drunk and asleep on the floor of her house with a hickey on her chest.[2] Moreover, it is shown that she once left Yasuho at a summer camp in order to have vacations in Okinawa.[3]

She can be hypocritical by teasing Yasuho about whether she has a boyfriend, warning her not to get taken in by the "crazy naked guy" she found crawling near the Wall Eyes, and then condescendingly laughing.[4]

Despite her challenged relationship with her daughter, Suzuyo still cares for Yasuho by offering to cook and often wonders where she goes when she leaves the house.[4][5]

Suzuyo married an unnamed man, and had Yasuho at some point in time. However, when Yasuho was 10 years old, Suzuyo and her husband divorced.

Ten years before the events of JoJolion, Suzuyu brings a young Yasuho to a summer camp so that she can have a summer vacation on her own. Using her Stand, Yasuho hacks into her mother's phone and sees that she was searching flights to Okinawa and thus asks with whom she is going to Okinawa, which embarrasses Suzuyo.

During Yasuho's first year in middle school, Yasuho buys a hair clip and shows it to Suzuyo. Suzuyo is at first concerned at how much Yasuho spent on it, considering how little money they have, but lets Yasuho keep it anyway.

Yasuho loses the new hair clip one day, when she was supposed to meet her father in the aquarium. She blames her mother for throwing it away in the trash can, because she thought Suzuyo hated her father and didn't want her to show it to him. Just when Yasuho tries to run out to the trash can, she is knocked unconscious by the hair clip, in reality a Rock Animal.

Suzuyo calls an ambulance, but finds Yasuho missing; she is shocked and despaired to find her daughter on the bathroom sink with a razor and a slit wrist.

After a drunken night out, Suzuyo kicks off her high heels at the entrance of her house and drinks some more liquor. She leaves the bottles and glasses scattered around the living room table and carpet before passing out. When Yasuho returns home in the morning, she finds her mother asleep on the floor and notices a hickey on her chest, before crying at how stupid her mother can be.

While playing on her PlayStation, Suzuyo notices Yasuho return home and offers to cook for her. Yasuho declines and says she's just going to go out again anyway. Annoyed, Suzuyo asks why Yasuho is talking sarcastically like her father and asks her to play at least one game with her. When Yasuho remarks that she's in a rush and to not lecture her, Suzuyo yells back asking if Yasuho thinks she isn't motherly.

Just as Yasuho looks at her mother's face, she is shocked to see her mom has the same face as a man she saw earlier. Unaware of what Yasuho was talking about, Suzuyo asks whether she's heading out to see a man. She scolds Yasuho not to fall for the crazy naked guy she found crawling near the Wall Eyes and then uncontrollably laughs, causing Yasuho to cry and run away from the house.

Later, Suzuyo apologizes when she sees Yasuho in a panic and says they should go eat dinner. Yasuho doesn't say anything and Suzuyo wonders if something happened.

Suzuyo sees Yasuho heading out of the house and asks where she's going off to.