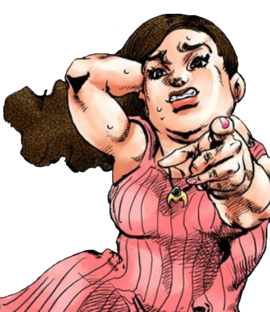 JJL Chapter 84
“
I'm sociable, aren't I?! Everything was going so well... I just thought if I got in close with Norisuke then good things might happen! But that stupid bitch, Mitsuba! She insulted me and got in the way of my plans!
”
—Maako Kitani, JJL Chapter 86: The Wonder of You (The Miracle of Your Love), Part 3

Maako is the CEO of the Seiten Holdings company and the owner of the Seiten Birdies baseball team based in Morioh. She is quite well-off and a respected citizen of Morioh, but is jealous about the Higashikata family's valuable property.

Maako is a short, overweight woman with long wavy dark hair. She wears a necklace with a locket shaped like an "M" and a sleeveless dress.

The series is known for alternating colors between media, the information presented below may or may not be canon.
Skin(Fair, pink lipstick, pink nails)
Hair(Dark Brown)
Eyes(Dark)
Outfit
(Pink dress, yellow necklace, light brown shoes)

Maako is greedy and selfish, acting sociable and friendly with others to get what she wants. However, she is willing to lavishly spend her money on her boyfriend, oblivious that Ojiro is stealing extra money and taking advantage of her. She is not afraid to bend the law to further her goals. Her condo and stadium were built on top of a weak foundation and she had to bend the law to get a building permit.[2] She is also narcissistic, calling her own hand cute and complaining that Mitsuba insulted her despite Mitsuba only being a housewife.[3]

Maako Kitani is a citizen of Morioh. She's had a successful career as a businesswoman as she is the CEO of her own company, "Seiten Holdings". She is also the owner of the local baseball team, the Seiten Birdies. Thanks to her wealth, she has her own condominium. However, she is jealous of the valuable hilly land that belongs to the Higashikata Family. In contrast, Maako's own land is of poorer quality and she had to bend the law to build her stadium. Maako thus maintains a good relationship with Norisuke Higashikata IV in the hopes of acquiring his land one day.

Maako has a single daughter, but is single. She became Ojiro Sasame's girlfriend at some point in the past.

Maako tries to alleviate the situation when the staff of her child's school and the parent council argue with Mitsuba about Tsurugi attacking his classmate Mina with the school gates. She tells Mitsuba not to worry because she's upbeat and good friends with Mina's mom so she'll be an in-between for the two to settle things out. However, Mitsuba tells Maako to move her "forepaw" off her shoulder. After Mitsuba threatens them all and leaves, Maako points out that all evidence points to Tsurugi being the culprit of the crime. Before she left, Mitsuba placed upward-pointing vectors on the coffee cups that Maako and the others were holding causing it to spill all over them.[2]

Makorin goes home to her condo afterwards. While Ojiro is in her jacuzzi, Maako declares her hate for Mitsuba and mentions about the rumors of Jobin killing his classmate to heal his incurable disease. Meanwhile, Ojiro steals some money out of her purse while she continues her rant. She realizes she's late to pick up her daughter from school and accidentally steps on Ojiro's prosthetic fingers while leaving, but she promises to buy him new ones that are way better.[3]

When Ojiro steals the Locacaca from the Higashikata house, he sends Maako pictures and evidence of Jobin's smuggling and money laundering. She later looks around her condo for Ojiro and then hears his phone ringing. Jobin explains his Stand Speed King's ability before realizing she isn't a Stand user, and then kills her by boiling her blood vessels and causing a cerebral infarction before drowning her in her jacuzzi, where she reunites with Ojiro's corpse.[4] Her corpse is subsequently found and her death makes the news.