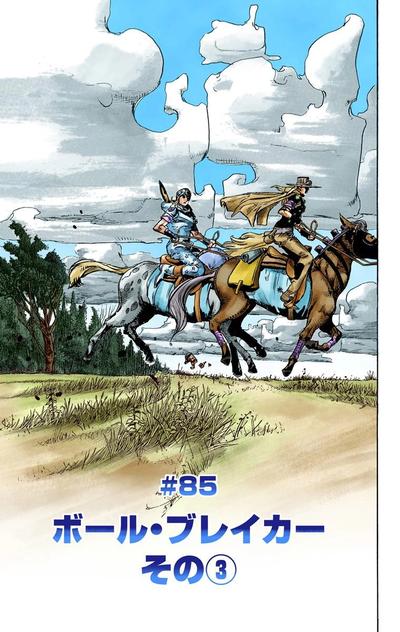 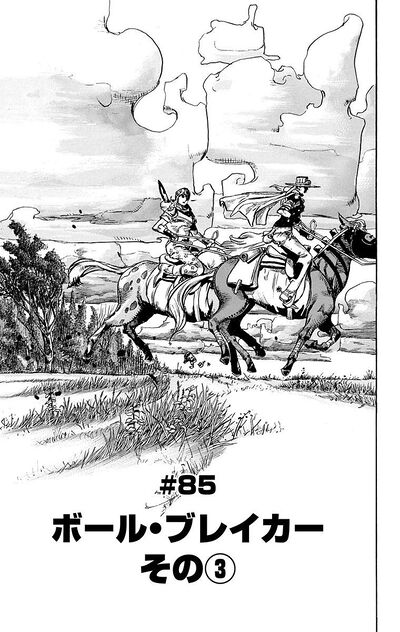 Johnny still cannot get over the grief as Valentine picks up a revolver, and empties it on Gyro's corpse to ensure his death before tossing it away and approaching Johnny. Johnny wastes several of Tusk's bullet nails on Valentine's gap before he remembers to add the horse's power to his Spin.

Valentine hides in the waves before reappearing near Slow Dancer as it gallops and slit its throat. Slow Dancer trips and unhorses Johnny who has only one nail left. Valentine slowly approaches, daring Johnny to shoot his last nail, and claiming that he will be the last sacrifice for the United States' happiness.

Johnny finally understands the meaning of Gyro's last words. He spins his Steel Ball and uses it on Slow Dancer's leg, causing a reflex like during their first interaction. Slow Dancer kicks Johnny up in the air and in the process, imbues him with the Golden Spin. With the Golden Spin and one nail bullet left, Johnny unlocks Tusk ACT4.

Author's Note
“
Recently, I've been really into art exhibitions and zombie movies. I just want to immerse myself in both.
”
—Hirohiko Araki
“
最近本当、「絵画展」と「ゾンビ映画」を観てます。どちらもずっと浸っていたい。
”
—Hirohiko Araki