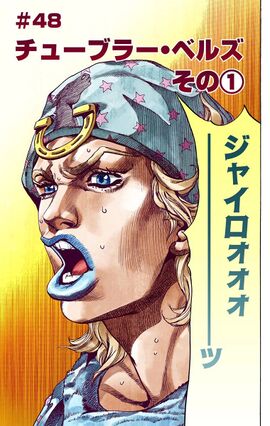 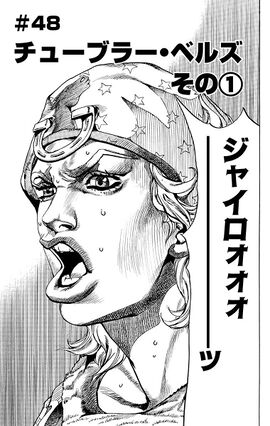 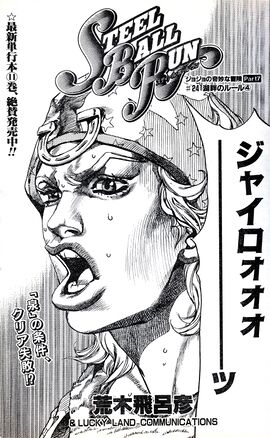 As Gyro is being absorbed into the giant tree, Johnny thinks and is extremely reluctant at the idea of abandoning the Corpse Parts, reasoning that he fought hard to get them, and that only Gyro is being affected. When Gyro is nearly absorbed, Johnny looks away and asks for forgiveness, clinging to the Corpse Parts.

Near the tree, Sugar Mountain laments Johnny's failure. Her role as guardian of the tree being over, she wonders how many years her parents who are the next guardians, will spend near the tree. However the parents are released, and they see Gyro going back to Johnny. Upon his return, the Neapolitan sees Johnny sobbing before the sole survivor of the Eleven Men. Johnny has very reluctantly exchanged the Corpse Parts for a bottle of wine and the promise that the man will never come to them. For having made such an unfair deal, Johnny is grief-stricken.

A flashback details one surgical operation Gregorio Zeppeli and his son Gyro made. Having to save either an infant son or his mother, Gregorio asks who they have to save. Gyro objects, arguing that the father is nearby and should choose, but Gregorio answers there are moments of uncertainties and doubt, during which the outcome depends on God only; and that is why they should spare the father the burden of choice.

In the now, Sugar Mountain praises Johnny and Gyro for their ability to spend everything, telling that "he who can let everything go will obtain everything", and deems them worthy of possessing the Corpse. Meanwhile, Gyro cheers Johnny up by proposing a toast to the next Corpse Part.

At 2 km of the Michigan Lake, Diego meets with Mike O., chief of Valentine's guard. Mike O. informs Diego that they got hold of the Corpse Parts Johnny and Gyro obtained during the 5th and 6th stage, and asks for precision about the traitor. Diego has no choice but to reveal that the traitor should be a woman weighting 51 kg or less.

In the presidential villa in Chicago, Mike O. has informed Valentine of Diego's information. He also has narrowed the initial 1364 suspects into 282 suspects weighting 51 kg or less. Valentine decides to heed Diego's advice and orders Mike to look for the women weighting less than 51 kg first, among them is Lucy's dossier. In order to identify the culprit, Mike O. uses his Stand Tubular Bells, which enables him to blow into metal, and partially transform them into tracking balloon-animals; the balloons then destroy the phone the traitor used to call Mountain Tim, having memorized the scent of the caller, and Mike asks for permission to execute the traitor on the spot, which Valentine authorizes.

Meanwhile, Lucy overhears the staff complaining to Steven that they are being investigated for no good reason. When Steven leaves, Lucy breaks down in tears as she sees that the hunt is narrowing on her. She then investigate several books in a library, notably "The Secret Engagement". She then borrows "The Sign of Four", ostentatiously reading it in a park, which catches the attention of the First Lady, Scarlet Valentine, whose readings Lucy has been investigating earlier. They bond, and Lucy subtly flirts with Scarlet, which prompts the latter to invite her to her presidential residence in Chicago. Lucy, exploiting Scarlet's bisexuality, infiltrates Valentine's headquarters.