Boku no Rhythm wo
Kiitekure

Oyecomova is a terrorist from the Kingdom of Naples who participates in the Steel Ball Run. Having heard of Gyro Zeppeli's participation, he seeks revenge on him and attacks Gyro alongside Mountain Tim and Johnny Joestar in the Rocky Mountains.

Oyecomova is a Stand User who wields the Stand Boku no Rhythm wo Kiitekure to create bombs.

Oyecomova is a young man with long, dark hair. His makeup is loosely based on the American flag and tattoos representing clocks cover his legs and arms. The netting-like veil over Oyecomova's face is meant to act as a sun-protectant and an insect screen, which was meant to give him an advantage in the race.[1]

Oyecomova's face tattoos were originally colored red and blue matching the American flag in the Steel Ball Run promotional shorts but were later changed to just blue in the official digital colored manga.

The series is known for alternating colors between media, the information presented below may or may not be canon.
Skin
(White with dark green tattoos, blue and white face paint.)
Hair(Brown)
Eyes(Black)
Outfit
(Velvet hat, coat, and skirt with golden accessories, black veil.) 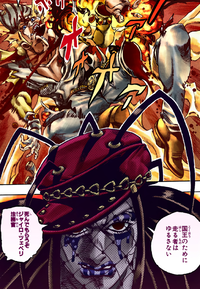 Oyecomova is a mad bomber

Oyecomova is a fairly disturbing individual. At first, he seems to be fairly passive, from where he actually warns others not to touch him due to his Stand. However, this is apparently a front—he has shown that he has no qualms about killing others and displays fierce dedication to the missions he takes up, seen where he was ready to resume his plot to assassinate the King of Italy after killing Gyro Zeppeli. He also often claims that God's will is the cause of why he got where he was.

Boku no Rhythm wo Kiitekure allows Oyecomova to create and attach special time bombs to anything he touches, be it solid objects or even water and smoke. This makes him very deadly to approach.

Even before acquiring his Stand, Oyecomova was an extremely skilled bomb-maker, who became notorious for his deadly bombs and even managing to create a makeshift bomb in prison and use it to escape.

Oyecomova is a terrorist from the Kingdom of Naples. Two years before the Steel Ball Run, he had attempted to assassinate the king by blowing up his carriage. Although the king was fortunate not to be inside, five people had died instead, including two children. Oyecomova was arrested and imprisoned to await his execution, but within the prison that he was being held at, Oyecomova managed to kill a guard by putting gunpowder in his ear.

With this accomplished, he proceeded to make his escape into the United States. He entered the service of Funny Valentine afterwards. Over time, his skills with explosives improved and eventually evolved into a Stand when Oyecomova entered the Devil's Palm four days before he encounters Gyro.

Hearing about Gyro Zeppeli running in the Steel Ball Run, Oyecomova wants to take revenge on him and secretly puts a $200,000 bounty on his head. He also follows Gyro during the second stage and arrives at the midway checkpoint town of the second stage. In there, he sends a message to Valentine informing him that he suspects Gyro of having the first Corpse Part. 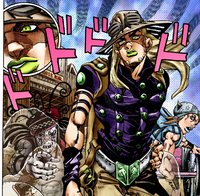 He then enters Gyro's room to searches his luggage and finds a letter alluding to the Zombie Horse. Mountain Tim catches him in the hotel room and grabs Oyecomova's shoulder. A chunk of skin comes off and soon blows up, heavily injuring Tim. However, Tim was able to scatter his body parts and survives. Oyecomova sneaks up on Gyro and touches his right hand, creating time bombs in his palm. Gyro is forced to hold his Steel Ball as hard as possible. Oyecomova then sends a rat bomb that explodes near Gyro but Gyro doesn't let go. Knowing that the bombs will explode sooner and later, Oyecomova decides to leave and retrieve the Zombie Horse. Using the Spin, Gyro manages to preserve most of his body and actually hits Oyecomova, forcing him to flee. He is pursued by Johnny and Gyro. 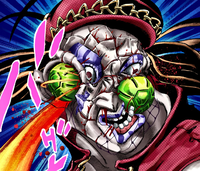 In the mountainous area leading to the Zombie Horse, Oyecomova has an advantage and creates bombs to stay out of Gyro's range. When they enter a river and run upstream, Oyecomova empties his gourd on his palm, creating a flow of bombs. Johnny and Gyro run past them. Oyecomova then touches a wasp nest, turning the swarm into bombs but the duo trap them with spider webs. However, Oyecomova then smokes and turns the smoke into bombs, making Gyro's cheek explode. It seems that Oyecomova has definitely outrun the duo but he then hears a buzzing sound in the smoke. He pulls a spider web towards him, thinking that the duo is trying to turn the wasps against him and is confident that his explosions cannot hurt him. However, he then discovers Johnny's spinning nails stuck to the web. They act as boosters for Gyro's Steel Ball, increasing its range and Gyro is able to send his two Steel Balls at Oyecomova's face, smashing it in.