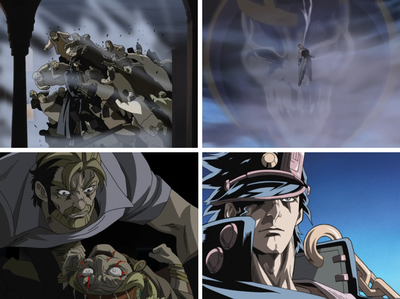 Justice (ADVENTURE7 正義, Adventure 7 Jasutisu) is the seventh episode of the JoJo's Bizarre Adventure OVA. It adapts Chapter 128, along with Chapter 158 through Chapter 161 and finally Chapter 179 of the manga.

Polnareff is forced to flee but traps himself inside the restrooms of the hotel. Meanwhile, it is shown that Jotaro is shown being awake. Polnareff hears the zombies approaching his hiding spot but the zombies then seemingly disappear. Anxious, Polnareff cannot resist looking through the keyhole of the door and is ambushed by a zombie. The zombie's tongue lashes out and cuts Polnareff's own tongue as a result. Under the influence of Justice, Polnareff is almost forced to lick the toilets clean.

Jotaro suddenly enters the bar, only to find Enya alone. He asks where is Polnareff and Enya tells him the directions to the toilets. However, Jotaro gets suspicious when Enya calls him directly by his name and doesn't buy Enya's lie about Polnareff mentioning him. Enya thus reveals her true nature and surrounds Jotaro with her zombies. Meanwhile, Joseph and Kakyoin are also attacked by the waiters and clients under Enya's control.

Jotaro and Polnareff then flee outside and Enya sheds her disguise. When Joseph and Kakyoin reach the main hall, Enya tricks Kakyoin into believing she's innocent and take her with him. The group gathers on a rooftop and must defend themselves against the zombies, but are unable to find Enya the culprit. Polnareff is taken in by Justice, but Avdol suddenly reappears to destroy the fog with Magician's Red. Nonetheless, Justice reappears and the group is still under attack.

Jotaro then methodically unmasks Enya, but she escapes and has a baby make a hole on his leg. Nonetheless, Star Platinum sucks the entire fog inside of it, asphyxiating Enya. Enya is defeated, allowing Avdol to explain to Polnareff how he survived Hol Horse's bullet. However, Polnareff realizes the group has been hiding Avdol's convalescence from him. Unfortunately, a flesh bud in Enya kills her and she dies, refusing to reveal the secret of DIO's Stand. The town and crowd is revealed to be mere ruins and skeletons by the sun. The group also leave Hol Horse for dead and resume their journey to Egypt.