DIO's World: The Warrior of the Void: Vanilla Ice 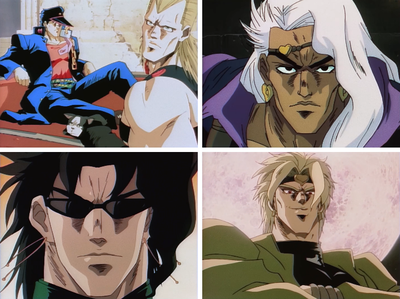 Jotaro and his companions finally arrive at DIO's Mansion. Expecting anything, they choose to leave the frightened Iggy behind. The front gate opens by itself, signaling that DIO is aware of their presence. Meanwhile in Japan, Suzi Q is at Holy's bed. The ailing Holy wakes up and expresses her confidence in her family.

Meanwhile, the group is making their way through the mansion. They find DIO's coffin and Avdol notices that Iggy has decided to come fight with them. He decides to burn the coffin with Magician's Red, but suddenly finds himself in the coffin, his stomach pierced. Polnareff rushes to his injured friend's side.

DIO suddenly manifests himself from the shadows. Suddenly a hole appears on the roof and Avdol shoves his friend aside. DIO's favorite minion Vanilla Ice has just annihilated Avdol's body with his unknown Stand. Afterward DIO demonstrates how obedient Ice is and Ice explains how he's killed Avdol. Angered, Polnareff summons Silver Chariot, starting a fight. Vanilla Ice enters his Stand Cream and makes Polnareff fall toward the bottom of the tower, followed by Iggy. Harassed by the invisible Cream, Polnareff disperses water in the air but although he detects Vanilla Ice, he is unable to wound him.

Meanwhile at the top of the tower, DIO toys with Jotaro and makes him unable to even approach him. Laughing, DIO asks Joseph for his blood for it will enable him to synchronize with his Joestar body. Jotaro protests, only to be thrown out of the tower. Joseph realizes that DIO is invincible.

Meanwhile, the battle between Polnareff and Vanilla Ice continues, but Polnareff is wounded and exhausted. Vanilla Ice almost kills him but Iggy intervenes with The Fool, slamming him into a wall. Still, Iggy is killed in Ice's counterattack. Angered by the act, Polnareff makes Silver Chariot cut Vanilla Ice in half and wins, but can only mourn Iggy.

For his part, Joseph is unable to fend off DIO. The sun has almost set, but Kakyoin intervens to save Joseph. He destroys the tower with Hierophant Green, allowing himself and Joseph to drive away. Nonetheless, it is night and DIO is now free to roam the streets of Cairo.