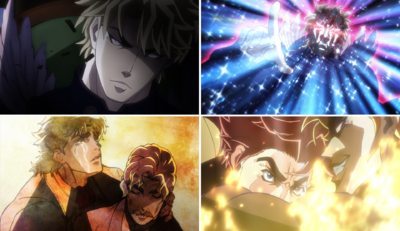 “
JoJo, hubris has led me to this end. This fall from grace has taught me a valuable lesson. However one may scheme or assemble, my downfall tonight is part of the human condition...A condition that I now forsake.
”
—Dio, before attempting to kill Jonathan while using the Stone Mask on himself 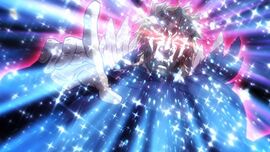 Dio rejects his humanity and wears the Stone Mask
Dio begs for Jonathan to handcuff him, and when the latter is about to do so, Dio explains how his life as a human has been a failure. Suddenly, Dio pulls from his robe the Stone Mask and wields it in the air, exclaiming that he rejects his humanity. He then pulls out a knife and attempts to stab Jonathan, but hits George instead who jumped in to protect his son. Dio dons the mask and wipes the blood from George onto it. The mask glows red and he begins to laugh as the tentacles impale the sides of his head. The police immediately begin shooting at him, causing Dio to fly out the window where he lies presumably dead on the ground. 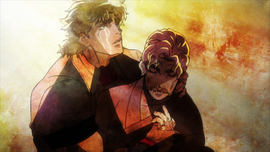 George Joestar dies in Jonathan's arms
While dying in Jonathan's arms, George gives Jonathan the ring on his finger, which belonged to his dead mother. The Inspector of the police force begins to regret something he did a long time ago. Back when he first became a policeman, a man was arrested who was trying to sell that very ring. That man was none other than Dario Brando, who had taken then ring from George during the carriage accident. George had been brought forth to the jail cell where Dario was and upon realizing who it was, George tells the policemen that he actually gave the ring to him. The policeman is confused why George would lie about this, but he explains that if he had been born into poverty he would have done the same thing. 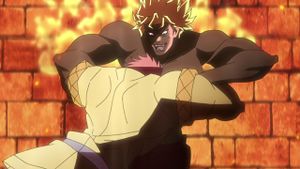 Jonathan and Dio brawl while falling into the burning house
On the roof, Jonathan blocks a kick from Dio, and then tackles him. The two go spiraling down the flaming house, but Dio manages to stab the wall and stops falling. Jonathan finds the same spearhead from earlier and stabs it into the wall. He's able to grab it, flip onto it, and launch himself towards Dio. He uses his belt to grab Dio's leg and pulls him downward. The two begin to fall to the house's burning first floor again, and this time Jonathan grabs Dio's knife and stabs him with it. Dio retaliates by breaking both of Jonathan's arms. With the last of his strength, Jonathan holds onto Dio and pushes against the wall with his foot, causing their trajectory to change. This forces Dio to land on the pointed end of the Statue of the Goddess of Love where he is unable to move, and thus burns to nothing with the house. Jonathan is blasted out of the house and is tended to by Speedwagon whom claims that he won. 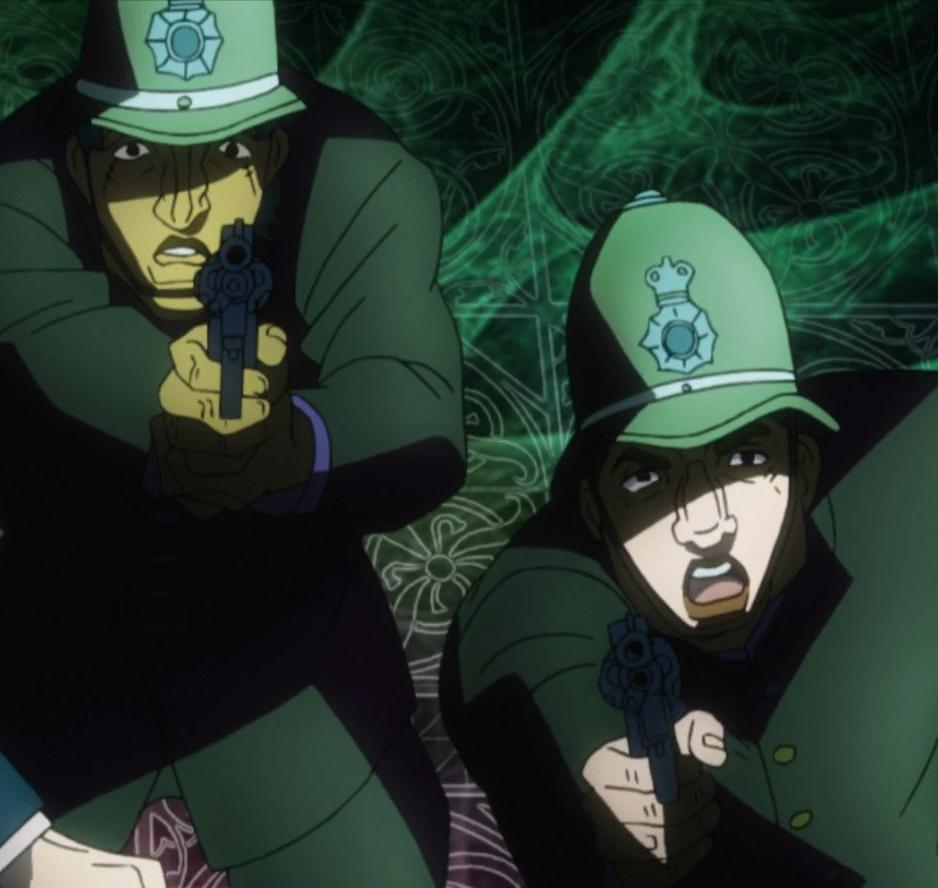 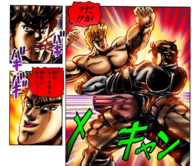 Commentary
“
Episode 3 is on fire, in every sense of of the term (laughs). Just like the first episode, we had to modify the storyboard several times and cut some scenes. It's also this episode that introduces the sight of mangled corpses, in scenes with several characters at that, which further complicates our work.