A summary of Josuke Higashikata's history and movesets in video games.

Josuke appears as one of the ten characters from the JoJo's Bizarre Adventure franchise to appear in the game Cult Jump.

Josuke appears as a support and help character. In his 2-Koma support, Josuke uses Crazy Diamond to heal the character that it punches and in his 3-Koma support he uses his Stand to rapidly punch the opponent as Crazy Diamond cries out "DORARARA!". His help Koma makes the duration of negative status effects (such as poison, blinding and burning) shorter. He has an ally boost with Jotaro. Josuke makes his playable debut in the PS3 game, and was confirmed along with Okuyasu, Jolyne and Ermes. Josuke is a powerful and easy-to-use character. Josuke has 1000 HP.

As one of the mass majority of playable characters in the game with the "Stand" Style, Josuke can turn Crazy Diamond on/off, changing movesets, as well as having access to the Stand Rush ability returning from the Capcom game, being able to attack in conjunction with his Stand.

During a fight, Josuke can use several different attacks that were featured in Diamond is Unbreakable.

ON GROUND
Josuke can summon or recall Crazy Diamond, shifting his available abilities.
Get closer and pull 300 km/h!

ON GROUND (Stand Off only)
Josuke turns to the side as Crazy Diamond's fists appear from his back, rapidly striking the opponent. Josuke's skills can be chained from this move.
Watch your mouth!

ON GROUND (Stand Off only)
A special ability that requires a stock of the Heart Heat Gauge to activate. The skill will initiate as a counter: Josuke will briefly adjust his pompadour, and if the opponent hits him during that moment, they will stop to insult his hair, temporarily sending Josuke into a blind rage as his hair spikes upward. Note that the Heart Heat required is not consumed until the counter actually succeeds, allowing him to attempt it repeatedly.

In this enraged state, all of Josuke's attacks have increased speed and damage, and deal much greater damage to the opponent's Guard Gauge. He is able to chain any of his normal attacks together indefinitely with Easy Beat disabled, limited only by the game's innate anti-infinite mechanics with a cap on the amount of times the opponent can be hit by a given attack before falling out. Josuke has super armor at all times, and will power through any incoming attacks that don't result in a hard knockdown or aren't Throws, HHA, or GHA. In addition, rock barriers erected by "He heals pretty quickly!" evolve from floating shield-like structures to completely vertical, tall walls.

However, Josuke will forcibly and constantly advance towards the opponent, unable to crouch, move backwards, stop moving, or guard; it should be noted that Josuke has no means of defending himself against the opponent's HHA or GHA aside from Sidestepping. If Josuke executes his HHA or GHA while enraged, his hair will continue to stand during the whole animation.
I'm not done kicking your ass!

ON GROUND
A skill exclusive to Josuke's "Watch your mouth!" state. Crazy Diamond grabs a downed opponent and forces them back onto their feet while staggering them, allowing Josuke to extend his combo.
Dora!

ON GROUND (Stand On only)
Josuke and Crazy Diamond slide across the ground a short distance before Crazy Diamond kicks the opponent in the head, hitting high instead of low, and propelling them in the air.

ON GROUND
Josuke summons Crazy Diamond to flick a fast projectile forward. The projectile and its properties are determined by the button inputted. (Comboable through Puttsun Cancel)
Break through and beat you up!

ON GROUND
Josuke braces himself with his arms as he charges at the opponent, before summoning Crazy Diamond to pummel them. This ability can initiate Rush Mode. (Comboable through Puttsun Cancel)
DORA!

ON GROUND
Josuke summons Crazy Diamond to rapidly punch and dig up the ground, leaving a small, visible spot of excavated earth. The punches themselves can knock the opponent down, and also hit the opponent if they're already downed. This skill has a follow-up. (Comboable through Puttsun Cancel)
As you were!
(After "DORA!")

ON GROUND
Using a piece of rubble he took from the floor, Josuke quickly flies back to the point where "DORA!" was last performed by restoring the piece. This move can be used from anywhere on the stage, and is excellent for evasion or closing the distance on an opponent.
Special Moves (Stand On)
DORARARARARARARA!

ON GROUND
Crazy Diamond unleashes a barrage of punches at an upward angle, knocking the opponent into the air. This move doubles as an anti-air, and can initiate Rush Mode. This is a Stand Rush skill that Josuke can disconnect from to attack the opponent while it is executing. (Comboable through Puttsun Cancel)
Rockabye baby!

ON GROUND
Crazy Diamond quickly flies forward a moderate distance and throws a hook. If the attack connects, Crazy Diamond will pummel the opponent before punching them in the face, sending them flying.
He heals pretty quickly!

ON GROUND
Crazy Diamond punches the ground, digging it up before reforming it into a floating barrier that stops non-HHA/GHA projectiles and damages the opponent should it be touched. If Josuke or Crazy Diamond touch it directly, the barrier will also shatter. This is a Stand Rush skill that Josuke can disconnect from to attack the opponent while it is executing. (Comboable through Puttsun Cancel)
Throw
Guess I wasn't mad enough
2 ATK buttons at close range or

ON GROUND
Josuke picks the opponent up by their collar, before Crazy Diamond appears to punch them in the face and send them flying.
Heart Heat Attack / Great Heat Attack
You're in my range!

+ 2 ATK Buttons ON GROUND
Crazy Diamond flies forward in a straight punch. If it connects with the opponent, Crazy Diamond will unleash a barrage of punches, ending with an overhead smash followed by an uppercut that sends them flying.
Meet my homing missile!
(During "You're in my range!")

+ 2 ATK Buttons ON GROUND
By spending an extra half of a bar of his Heart Heat Gauge, Josuke can add a supplementary attack to his HHA. Instead of delivering the last two punches, Crazy Diamond flies backward and flicks a shard of broken glass at the opponent that boomerangs back through them using their blood, knocking them back towards Josuke. This makes the HHA deal more damage, and leaves the opponent at Josuke's feet instead of knocking them away; a more advantageous situation for him.
You're already fixed!

ON GROUND
Crazy Diamond flies forward and delivers a powerful punch. If it connects, the opponent is blown back and knocked onto the floor while Josuke swaggers over to them. As the opponent gets up, Josuke tells them that he's already healed them in order to "make it fair", with their health completely restored to full (this is purely visually cosmetic). While the opponent is left confused and distracted, Josuke sends Crazy Diamond to unleash an extremely powerful "DORARARA!" barrage that slowly brings them high into the air. Crazy Diamond then reels back and sends the opponent flying with a final uppercut that brings them back down to their true health in addition to the GHA damage taken (similar to how he defeated Yuya Fungami). If facing against Johnny Joestar, Josuke temporarily heals Johnny's paraplegia, before the attack debilitates him once again.

Josuke also possesses alternate costumes, most of which are taken from the artbooks such as JOJO-A-GOGO and JOJO 6251. Besides the entire cast from Part 4, Josuke also possesses special dialogues before a match against Jotaro and Old Joseph (in both cases he asks both if it is really them, since Josuke recognizes them but notices that they look much younger, while Part 3 Jotaro and Joseph don't recognize Josuke).

In addition, characters will insult Josuke's hair, using the same "taunting eyes" pop-up also used by Joseph's "Your next line is...", having him reply with "What the fuck did you say about my hair!" (今おれのこの頭のことなんつった！, Ima ore no kono atama no kotona ntsutta!) Josuke was one of the first confirmed characters for the game (alongside Part 2 Joseph, Caesar, Stroheim, Jotaro, Kakyoin, and Diego).

Since most of the game's animation, effects and attacks were reused from All Star Battle, Josuke's repertoire of abilities remains mostly the same, though with some new additions to aid him in battle.

He temporarily serves as the main protagonist of the story, along with Jonathan when the story enters the Steel Ball Run universe. He encounters his counterpart and fight a corrupted Joshu. After defeating Joshu, he is attacked by Yoshikage Kira and his Kosaku Kawajiri counterpart.

He is paired with Johnny Joestar in the Eyes of Heaven Tournament but was eliminated in the preliminaries by Old Joseph and Kira.

This is a list of the various insults each character gives to Josuke's hair in Eyes of Heaven. Upon having his hair insulted, Josuke will reply with "I won't forgive you for insulting it!" (けなすやつあゆるさねえ～～～, Kenasu yatsu a yurasane~~~). Note that characters not listed here reuses their quotes from All Star Battle (in Part 4 Jotaro's case, he reuses his Part 3 self's line from ASB), though they are re-recorded with their respective, new voice actors in cases of the Part 3 cast (except DIO) and Pucci. Japanese translations taken from here, except unused voice clips.

Replaces panels with Josuke panels in an X shape

Cost: 0
After making a 4x4 or larger, enhances four random Josuke panels after Stand Up. 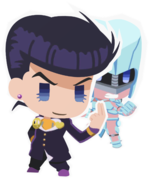 Erases panels and Stand panels in a mountain shape. Restores the erased panels as enhanced panels 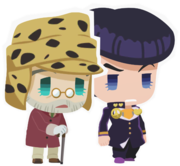 Cost: 0
After their Skill Gauge reaches 100%, charges partner's Skill Gauge by 10% (once per battle).

Josuke makes a brief appearance in the game's introduction as an image behind Giorno (along with Part 4 Jotaro, Part 3 Joseph, and Jonathan), appearing as Koichi remarks that Giorno has a kindness similar to those of the Joestar bloodline.

Josuke was one of the characters first confirmed during the game's announcement. 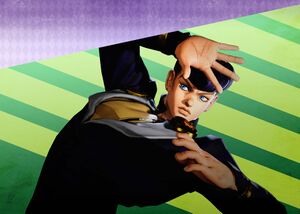