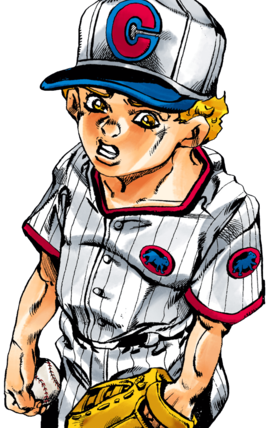 Emporio is a young Stand User, born and living secretly in Green Dolphin Street Prison. He sympathizes with Jolyne and becomes one of her primary allies. Emporio's Stand, Burning Down the House, grants him the ability to use 'ghost objects.'

Emporio is a presumably 11-year-old boy of average build. He has light, curly hair, and light, yellow-brown eyes.

Emporio is first shown as a timid, awkward boy, rather unwilling to fight.

However, as he continues to help the heroes, he is slowly dragged into the fight himself. He proves helpful by using his computer to gain information regarding the villains' powers, and in helping Jolyne out of several tight spots by hiding her in his "ghost room."

When caught in a conflict, he is not usually able to fight back due to the non-offensive nature of his Stand. The main exception to this is his final confrontation with Pucci when he is helped by Weather Report's stand.

Emporio's Stand, Burning Down the House, grants him the ability to use what he refers to as 'ghost objects.' This term refers to objects which have been destroyed at a location in the past. He primarily uses his ability to manifest a secret music room in Green Dolphin Street Prison that contains various imperishable objects, such as a harmless gun, a computer, and a chocolate bar which may be tasted but not eaten. Emporio may grant entry into the room to other people.

Emporio is a timid fighter but proves able to follow the directions given to him by the group.

Emporio borrows the Stand Weather Report after the death of its user.

Emporio was born to an unnamed prisoner in Green Dolphin Street Prison. Since then, he has lived there in secret with the help of his Stand, by using it to hide within a "ghost room" on the premises. His mother was killed by Enrico Pucci, who took her Memory Disc and/or Stand Disc, causing her to slowly rot away. It is not confirmed whether she was a Stand user or not. However, Pucci was originally unaware of Emporio's existence, which gave the heroes a momentary edge.

While in Green Dolphin Street Prison, he serves as a meaningful and useful ally to Jolyne and Ermes, as well as introducing the two to Narciso Anasui and Weather Report (who reside primarily in the Ghost Room provided by his Stand abilities), providing them all with information about the personnel, the enemies they fight, and even the prison itself.

After Jolyne, Ermes, Weather Report, and Anasui escape, Emporio follows to help Jolyne (flying a helicopter that Romeo gave Jolyne before Rikiel's attack) before being given Jotaro Kujo's memory disc, which later causes him to pursue Donatello Versus when Weather Report recovers his memories and activates Heavy Weather. He narrowly escapes death at Pucci's hands and is trusted with Weather Report's Stand Disc after it's user's death.

After Pucci resets the universe and Emporio becomes the final remaining member of the Joestar Group, he finds himself in a universe created to Pucci's specifications and is subsequently dogged by Pucci as he is the last remaining enemy in his perfect world. Emporio runs to his ghost room and tricks Pucci into forcing Weather Report's Stand Disc into Emporio's head. Weather Report subsequently fills the room with concentrated oxygen and effectively disables Pucci. Emporio ignores Pucci's last angry pleas to spare him, saying that walking the path of justice is fate, and he and Weather Report kill the priest with a barrage of punches, after which the universe resets again.

In this alternate timeline, Emporio finds himself right outside Green Dolphin Street and witnesses an alternate version of Ermes being kicked from the bus for attempting to pay with a fifty-dollar bill. Nearby, Annakiss, the alternate Anasui, invites Ermes to ride in their car in exchange for the money she can use to pay for gas. Ultimately, Emporio decides to join after meeting Irene, the alternate Jolyne, who invites the two to ride. Irene also possesses a Joestar birthmark, indicating that the Joestar family continues to live on. Deeply touched by the survival of his friends, Emporio gives his name when Irene asks for it. Later, the group picks up a hitchhiker, shown to be an alternate Weather Report.

Emporio makes his first video game appearance as an explanatory character for GALLERY MODE, alongside Telence T. D'Arby, Leone Abbacchio, Oingo, Boingo, Ghiaccio and Wang Chan. He is also part of the stage hazard on the KENNEDY SPACE CENTER STAGE (screaming "Watch out!" when the objects start falling on the stage). His voice is also heard in the ending text in PART 6's story-mode segment.