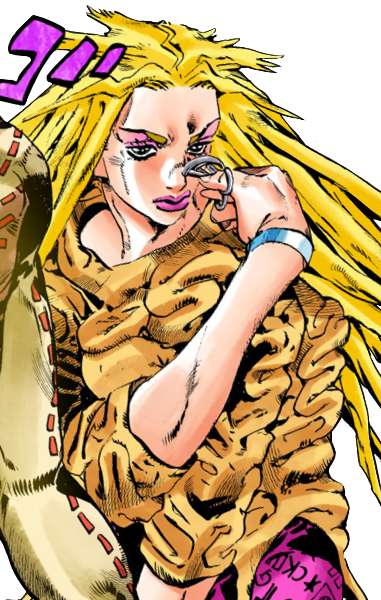 Miu Miu is the chief guard of Green Dolphin Street Prison. She clashes with Jolyne Cujoh and Emporio Alnino as she tries to prevent them from breaking out of prison. She is a Stand User and uses Jail House Lock to manipulate the memories of her enemies.

Miu Miu has long, ratty blonde hair that's styled in several long tendrils with her eyebrows styled into circles. She wears heavy amounts of makeup and as a prisoner, she is dressed in a large sweater with pom-poms that resemble eyeballs. Miu Miu also wears stockings that have holes in them and a skirt with various words written across it, such as "Delicious" on the rear.

Only the top half of her security uniform is shown. It is a long-sleeved collared shirt with two breast pockets and rectangular badges above them, as well as on the collars. Her left shoulder has a shield badge with text written above an emblem. Alongside it, she wears a belt with satchels and pockets attached to it.

The series is known for alternating colors between media, the information presented below may or may not be canon.
Skin(Pale, magenta lipstick.)
Hair(Blond)
Eyes(Green, pink eyeliner.)
Outfit
(Orange fur coat, magenta skirt, blue pantyhose, lime and green shoes.)

Miu Miu is the ruthless head guard of the visiting rooms at Green Dolphin Street Prison.

Miu Miu takes her job as a head guard seriously

Miu Miu seems to take her job as a guard rather seriously. Contrary to other guards, Miu Miu doesn't automatically use excessive force when dealing with the prisoners as she opted to openly confront Jolyne and show her Stand Jail House Lock as a warning first.[3] This implies Miu Miu was willing to let Jolyne be if the latter didn't try to escape. Even after affecting Jolyne with the memory loss, Miu Miu keeps an eye on her.[3][4] By looking at Jolyne's writings, she then discovered Emporio Alnino's existence and enacted a plan that would make Jolyne lead Miu Miu to Emporio so that she could ensure Jolyne couldn't receive help.[2]That said, Miu Miu was easily forced into helping Jolyne and Emporio escape as soon as Jolyne caught her and beat her up.[5]

While Miu Miu is generally less violent than the average guard, she remains a truly ruthless warden. As soon as she deems someone a prison breaker she doesn't hesitate to use lethal force. She was even willing to shoot Emporio, a small boy, to stop Jolyne.[6] After Jolyne causes her more trouble than she expected, Miu Miu does confess that she's pleased at the prospect of Jolyne being shot down by the guards.[7]

Miu Miu is, like most Stand Users, very confident in Jail House Lock and states that nobody can escape it.[2] Miu Miu seems to know her Stand well and is able to come up with several stratagems to exploit Jail House Lock's power, usually consisting in overwhelming her foes with information and perform sneak attacks.[2][6] She has a modicum of tactical ability in a fight. For instance, she manipulated Jolyne into leading her towards her hidden ally Emporio.[4] She also breaks Jolyne's arms in-order to stop her from deflecting bullets.[7]

Jail House Lock is a humanoid Stand capable of making one or several people able to only memorize three new pieces of information at once, the oldest memory being replaced by the newest memory.

Miu Miu is the head guard in charge of the visiting room and front gate areas of the Green Dolphin Street Prison. Working alongside Whitesnake, Miu Miu has been preventing Stand Users from escaping the prison thanks to her power. After Enrico Pucci fuses with The Green Baby, she is sent out to make sure Jolyne Cujoh does not meddle with Pucci's affairs anymore. 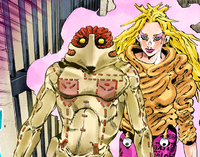 Miuccia Miuller appears to Jolyne in her temporary confinement cell and relays a message from Whitesnake about how she shouldn't escape and should comply; if she does, he will make sure that Jotaro's DISC will get out of the prison. Showing off her Jail House Lock as a warning, Miuccia explains that her orders are to kill Jolyne if she escapes and adds on that her other targets are Weather and Anasui. Jolyne declares that she is escaping and summons Stone Free to attack Miuccia. Thus Miuccia activates her ability on Jolyne.

Disguising herself as an inmate in the women's ward, Miuccia keeps an eye on Jolyne. She sits with Jolyne, interrupting her lunch and messing with her. Expressing her disgust when she steps on a cockroach, Miuccia proceeds to take her shoe off and put the cockroach in Jolyne's food then pours three sauces on Jolyne's plate to escape retribution. To further hinder Jolyne, Miuccia spills food on her and wipes off information from Jolyne's arms and takes the note in her pocket under the pretense of cleaning her. During the process, Miuccia sees the instruction to see Emporio but doesn't know of any Emporio among the inmates. 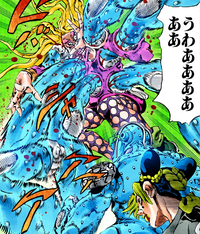 Still following Jolyne, Miuccia eventually attracts her attacks but runs away, luring her in a forbidden corridor when guards threaten to shoot her. Jolyne escapes the guards and arrives in Emporio's ghost room, just as she planned. Entering the room, Miuccia declares Emporio a criminal and shoots several bullets at Jolyne and Emporio, hitting him and his computer screen. Miuccia shoots again but Jolyne deflects the bullets, using their reflection to unite all the information in one. Out of bullets, Miuccia escapes in the staircase. Miuccia calls for reinforcement but is captured by Jolyne. Jolyne is overwhelmed by the arrival of the new guards and forgets Miu Miu constantly, allowing her to attack. However, Emporio gives Jolyne a print in binary from which Jolyne stitches a portrait of Miu Miu. Jolyne then asks if Miu Miu is an enemy, to which Miu Miu only tells her to die, confirming Jolyne's suspicion. Miu Miu realizes this too late and is defeated by Stone Free.

Miuccia's power on Jolyne disappears and is then forced to use it on the guards, which allows Jolyne, Emporio and Ermes to easily escape Green Dolphin Street Prison.