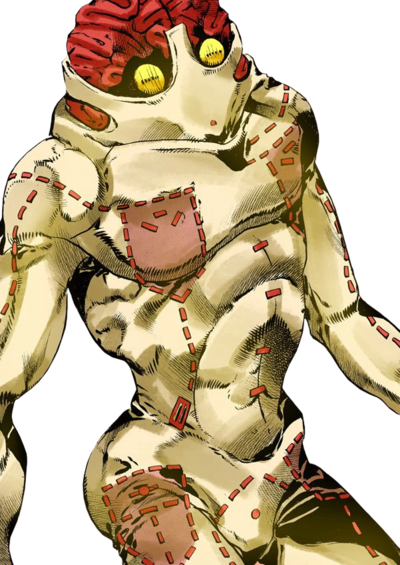 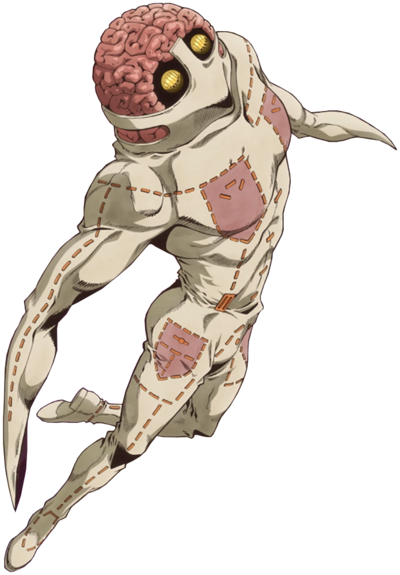 Jail House Lock (ジェイル・ハウス・ロック（JAIL HOUSE LOCK）, Jeiru Hausu Rokku) is the Stand of Miuccia Miuller, featured in the sixth part of the JoJo's Bizarre Adventure series, Stone Ocean. It is a strange-looking humanoid Stand covered in stitches. When triggered, the designated victim will only be able to remember the next three pieces of information they have processed.

“
I don't know what, but there's something about this place. Something more than surveillance cameras, as if the prison itself was a guard with a mind of its own.
”
—Emporio Alnino, SO Episode 23

Jail House Lock is designed to "lock" anyone who tries to escape from the prison. It relies on its power to debilitate its targets and make them unable to perform any complex task. Although it is shown to be able attack Jolyne violently enough to send her into a wall,[1] the memory loss it causes impedes its targets so much that she's able to attack them directly.

Jail House Lock inside of the cell bars.

Jail House Lock is a Stand capable of integrating itself with its surroundings and quickly traveling across their surfaces. Its body will contort to match the exterior of any object it integrates with, such as the iron bars or walls of the prison. This allows it to avoid attacks when fusing into walls, though the user is notably damaged should said walls be destroyed while it's inside them. Miu Miu uses this ability primarily to set up traps and trigger memory loss in prisoners trying to break out.

Jolyne's memories made after Jail House Lock's activation fading away.

Once locked by its ability, Jail House Lock causes its victims to only be able to retain three new pieces of information.[2] The Stand is triggered when someone or their Stand touches the bars or walls beyond the visiting room of the prison,[3] or if Miu Miu sics it on someone.[4] Although they retain all their memories from before the instant it is activated, the victim is now only able to process and remember three new memories and when they learn a fourth "thing", they will forget the first thing they've learned and so on.[2] Several people, up to at least several dozens, can be affected at once.[4][5]

The power is extremely crippling as the victim finds themselves distracted by a flow of new information, forgetting to perform any important task, like finding the user to defeat them. Miu Miu herself claims that the continual memory loss eventually destroys its victim's ability to think.[5] Miu Miu also exploits the memory loss to her advantage by distracting her enemies with many pieces of new information so they completely forget about the actual attack.[6] To limit the effect of Jail House Lock, one can learn a bunch of new facts as a whole, for instance not memorizing individual bullets but looking at the single reflection of the bullets in a mirror.[6]

If someone affected by Jail House Lock is attacked by more than three people simultaneously, their perception of reality is limited to only being able to perceive three of them at a time. Even it were a room full of guards attacking, the victim would still only be able to see the first three, and the rest would remain invisible. Miu Miu uses this to her advantage to attack and belittle Jolyne while remaining completely undetected. Later, when Miu Miu is taken hostage, this ability is used against her to allow Jolyne and Emporio to sneak past the guards and escape the prison without being noticed.