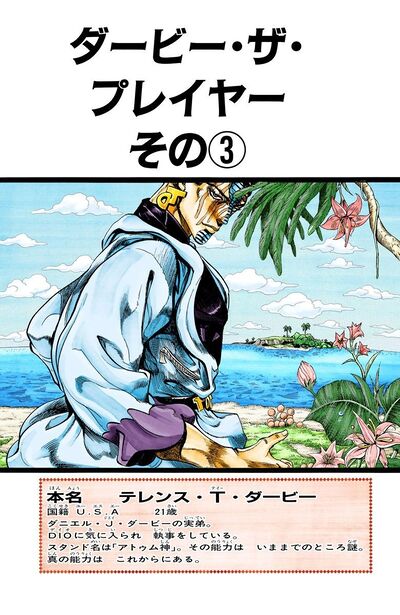 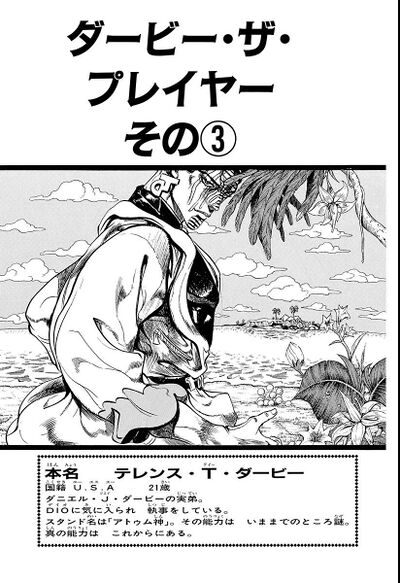 D'Arby the Player, Part 3 (ダービー・ザ・プレイヤー その③, Dābī za Pureiyā Sono 3), originally A Video Game of Souls (魂のTVゲーム, Tamashī no Terebi Gēmu) in the WSJ release, is the one hundred sixteenth chapter of Stardust Crusaders and the two hundred twenty-ninth chapter of the JoJo's Bizarre Adventure manga.

After being pulled through a hole in the floor of DIO's mansion, Joseph, Kakyoin, and Jotaro stand on a small tropical island with Telence. Joseph tries to interrogate Telence, but he refuses to answer Joseph's questions. The only way to get to DIO is by defeating Telence, so the group decides to attack him all at once. Telence, however, states that that is a poor idea, and proceeds to show them his "collection". He opens a cabinet, revealing all of his dolls. Within each doll is a soul stolen by Atum, similar to his brother's ability. To the horror of the group, Telence begins to brag about his skilled craftsmanship, every doll being handmade.

The group summons their Stands in order to attack, but Telence reveals that Atum had earlier ensnared Star Platinum's arm. Telence can now break it at any time, forcing the group to listen to his demands. Like his brother, Telence loves to gamble and so the group will have to gamble their souls over video games.

Author's Note
“
As one of those people who love winter, the current season is absolutely dreadful. I've come to want to return to my cool hometown.
”
—Hirohiko Araki
“
冬大好き人間の私としては、この季節がとてもつらい。涼しい故郷に帰りたくなります
”
—Hirohiko Araki