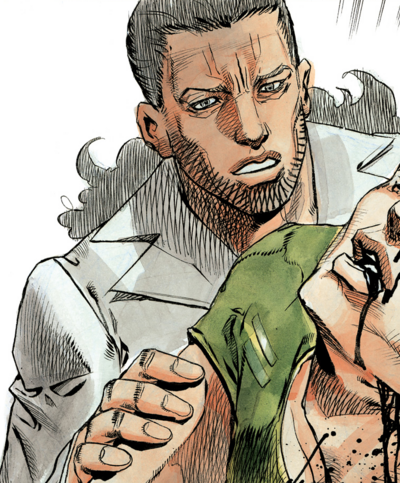 Curator of the Louvre

Body sliced in half with tire marks imprinted on him

Gaucher (ゴーシェ, Gōshe) is a tertiary character featured in the one-shot Rohan at the Louvre.

He is the curator of the department of Asian Arts at the Louvre. He grants Rohan Kishibe authorization to see Nizaemon Yamamura's mysterious painting, Under the Moon. Gaucher accompanies the manga artist to the abandoned warehouse where it is stored along with Noguchi and two firefighters.

Gaucher is a man of average height and build with shoulder-length hair that he keeps combed back, which is wavier at the bottom. He has a beard that is darker on his chin and angled eyebrows. Gaucher wears a light-colored suit with a white buttoned shirt.

The series is known for alternating colors between media, the information presented below may or may not be canon.
Skin(Tan)
Hair(Black)
Eyes(Beige)
Outfit(Light gray suit, white shirt) 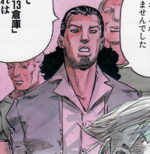 Gaucher is a cautious man who takes several security measures before allowing Rohan to see the painting. He has Rohan leave behind all of his personal items and assigns two firefighters from the museum's security services to accompany Rohan, as well as himself and an interpreter. He only allows Rohan to observe the painting for just five minutes to make sure nothing goes wrong.

He is also secretive, not wanting to tell Rohan about what part of the museum they are currently located at while they are traveling to the abandoned warehouse.

He has in-depth knowledge about the Louvre's history, knowing exactly when the Louvre was founded and why the Z-13 warehouse was abandoned.

At some point in his life, Gaucher was involved in a car accident which resulted in the death of a man. 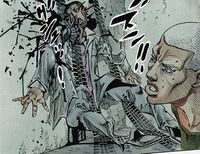 Gaucher is introduced as the responsible curator for the Department of Asian Arts at the Louvre. He gives Rohan Kishibe authorization to research Nizaemon Yamamura's painting "Under the Moon", but only for five minutes and asks him to leave behind anything he has. Surprised that the Louvre had a work of an artist he never heard about in the Z-13 section, which was long ago abandoned, he accompanies Rohan along with two firefighters of the security services and the interpreter Noguchi to investigate it.

When the group finally finds the painting, one of the firefighters has his skull pierced and is sucked into the darkness of the ceiling. Gaucher is the first to notice the ghost mob attacking them and attempts to call the police, believing them to be simple thieves, but is smashed against the wall and suddenly covered by tire marks across his body. Moments before dying, Gaucher recognizes a ghost as the same person who was killed in the traffic accident and is sucked into the ceiling's darkness. His body is never found and he is considered as missing since then.[1]