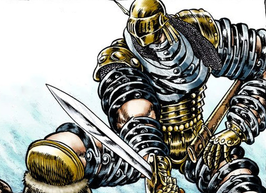 The 77 Rings (７７, Nanajūnana Ringu) was a challenge held for knights in the Windknights town in the middle ages. Known to "freeze the blood of any man", the challenge served as a training method, but only 5 knights in history succeeded in it. 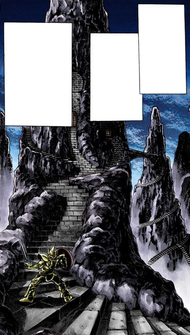 The challenge consists of climbing a 10km long mountain through stairs and roads. In the travel the knight must surpass cliffs and rivers wearing heavy armor. Along the way the knight must fight and defeat 77 opponents in a serious fight to the death. Each of the 77 opponents carry bracelets on their arms and legs, which must be taken as proof of the knight's victory. Individually these "rings" aren't heavy, but together they can weigh over 100kg, making the knight struggle to even stand up and hardening his fights. It is because of these rings that most knights fail and are killed in the challenge.